A Positive Conversation Can Change Your Brain! 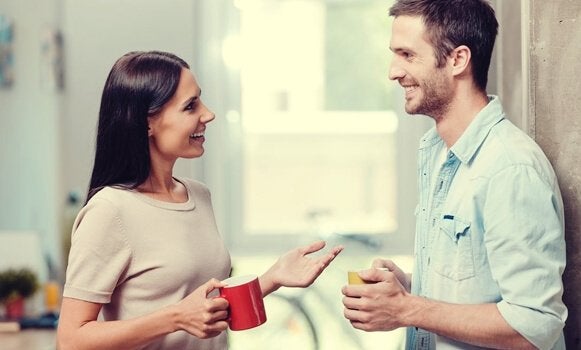 There are few things that can fill us with such energy and life as a positive conversation. In these conversations you feel like you’re being listened to and, in turn, you want to listen to the other person. There is a real connection between the people involved. They say so much and are filled with such kind, cheerful words. These types of conversation are a real balm for life.

The opposite can also happen. Sometimes, when you speak, you feel that the other person just doesn’t understand you. You also feel annoyed when you have to listen to them. You can sense a negativity in their words, and sometimes they are downright aggressive. These encounters just leave you vexed and angry, and with a certain bitterness in your heart.

We all know from experience that a positive conversation is a wonderful gift. What is new is that science itself has ratified this through recent research. What they have proved is that a constructive dialogue has the ability to modify some of our brain patterns. Neurochemistry also shows how this type of conversation can help our brains.

An investigation about words

Mark Waldman and Andrew Newberg are researchers of human behavior. The former is a Professor of Communication and a Member of the Executive Program of the MBA at the University of California. The latter is Director of the Myrna Brind Center for Integrative Medicine at Thomas Jefferson University. Both have conducted extensive research and have written a book called “Words Can Change Your Brain“.

The research they have carried out has revealed some very interesting information about words and positive conversation. They discovered, for example, that the word “No” activates the production of cortisol, the stress hormone. It puts us on alert and weakens our cognitive abilities.

On the contrary, the word “Yes” causes dopamine to begin to be released. This is a brain hormone that regulates the mechanisms of gratification. It produces a feeling of well-being. It also reinforces a positive attitude towards communication.

These discoveries about the words “Yes” and “No” is only a small part of the research conducted by Waldman and Newberg. Through different experiments, they managed to prove scientifically that words can change our brain. Positive or negative conversations have the same effect too.

Some people use more of the words that have a negative effect on the brain. Others, by contrast, use more constructive words. In both cases, people do this without really being aware that they are doing it. What is certain though is that both types of people communicate a different sensation to the other person.

It is also interesting to note that in a study carried out by the CreatingWE Institute a similar conclusion was reached. In this case they studied the effect of bosses’ words on their employees. They demonstrated that caring and warm expressions raised the production of oxytocin. But not only that, they also increased the employees’ intellectual capacity and made them more productive.

Waldman and Newberg have coined a concept that is already catching on. They call it “compassionate communication“. It refers to a type of communication which encourages respect and sincerity towards the other person. This is the kind of communication that takes place when you have a positive conversation.

The researchers also discovered one of the cognitive ingredients that characterizes positive conversation. People understand better when ideas are treated separately and when there aren’t more than four being dealt with. In other words, there is a greater guarantee that people will understand if several issues aren’t addressed at the same time. Another important point is to wait for at least 30 to 40 seconds before moving from one topic to another.

Waldman and Newberg also found that certain words have a profound impact on people. These are the words poverty, illness, loneliness or death. These expressions affect the amygdala and bring on many negative thoughts. However, they also discovered that you can soften the effect of these words. They don’t have such a negative connotation when they are not at the start or end of a sentence.

As it is impossible to eliminate every single negative word, it is always good to compensate them with positive ones. The same goes for the conversations. When communication has been negative, it must be compensated with a positive conversation. This brings balance, not only to the conversation, but also to our brain chemistry.

Positive Thinking – 5 Ways to do This
Did you know the saying "When one door closes, another one opens" is in the novel Don Quixote? What's this all about? Keep reading and you'll discover why, while we tell you about the best keys to maintaining a positive mental attitude. Read more »
Link copied!
Interesting Articles
Psychology
The fern and the bamboo: a fable on resilience

Psychology
Internet Gaming Disorder: What's it All About?

Lately, people have been demanding treatment for teenagers with Internet use problems. This is because it's not uncommon to see…

Psychology
Leading by Example: The Best Gift You Can Give Your Children

Children, when they're little, are innocent beings who rarely question what their parents say or do. For them, whatever their…

Psychology
How to Help Someone Who's Having a Seizure

Learning how to help someone who's having a seizure will allow you to give them the best care possible. Although…