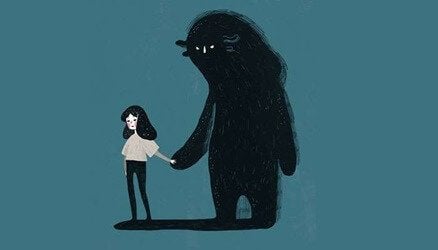 We must realize that there are many more symptoms of depression besides the ones we usually study. There are attitudes, states of mind, and behaviors that apparently have nothing to do with this disorder but are, in fact, deeply related to it.

Depression can manifest in various ways, in different intensities, and in diverse dynamics. Not everyone who has tears coming out of their eyes is depressed, nor is everyone who smiles happy. That’s why this condition isn’t always evident.

Some symptoms of depression are often overlooked. This doesn’t necessarily mean that whoever gets them is depressed. They’re just indications that suggest the existence of this disorder. However, they should be evaluated altogether and in context. In this article, we’re going to be exploring 7 symptoms of depression that often go unnoticed.

1. Physical discomforts unrelated to any disease

This refers to muscle pains that suddenly appear without a specific reason, migraines, frequent indigestion, and sudden dizziness. The person goes to the doctor but they’re unable to find anything abnormal in the patient’s body. However, the pain doesn’t go away.

It’s also possible for the person not to experience any physical discomfort but still feel like there’s something wrong with their health. For example, they may think a cold sore could be a sign of leukemia. Perhaps their heart starts beating really fast and they immediately think they have a heart condition.

2. Canceling and postponing plans with others

The truth is that depressed people stop hanging out with or meeting others. This isn’t something they do deliberately, though. In reality, they don’t feel like isolating themselves from others. They just feel too tired to go out or perhaps they’re focused on something else.

This is one of the main symptoms of depression that often goes unnoticed. The brain of a depressed person works differently than the brain of someone who is serene and happy. This ends up affecting their motor skills and slows down their movements.

It may even seem like the person is moving in slow motion. In addition, it takes a while for them to react to stimuli. When you talk to them, it’s as if they have to meditate on what you just said to be able to answer.

Science has yet to establish the relationship between atopic dermatitis and depression. However, the University of Wisconsin conducted a study and concluded that depressed people tend to suffer from this condition.

Atopic dermatitis is characterized by the appearance of eczema on the skin that causes itching and pain. The cause of this condition is still unknown. In spite of this, researchers associate it with people’s state of mind.

5. Watching too much television: One of the most common symptoms of depression

Watching too much television or spending a long time on the computer or cell phone is a symptom of depression. The person ends up developing an obsessive relationship with a screen. They do this as a way to escape or isolate themselves.

Those who watch television for hours and hours on end don’t want to think. They want something to distract them from reality. When people are glued to a screen, they can become so self-absorbed to the point where they’re no longer able to connect with their environment.

A long-lasting lack of sexual desire is another unnoticed symptom of depression. However, professionals must evaluate this aspect carefully. One thing doesn’t automatically imply the other.

The mind works slower when it’s depressed. It’s also very difficult for depressed people to concentrate, organize their ideas, and plan activities. This explains why they tend to make small mistakes on an everyday basis.

A depressed person tends to forget things, gets confused easily, gets easily distracted, and it’s difficult for them to learn new things. It’s as if that person wasn’t completely present.

All of these symptoms of depression are generally not very noticeable neither for the depressed person nor for those around them. If you have several of the symptoms we’ve shared in this article, it may be appropriate to stop and figure out what’s going on.

The Language of Depression
The language of depression is powerful and it changes you. Anxiety, apathy, and desperation seep into the words you choose. Read more »

Link copied!
Interesting Articles
Psychology
How to Turn Your Sensitivity into Your Biggest Strength

According to researcher Elaine Aron, around 15-20% of people are highly sensitive by nature. These people - who tend to feel overstimulated,…

Psychology
What Happens When We Judge Others?

Whether we believe it or not, judging others is something incredibly habitual. Something that turns out to be counterintuitive given…

Psychology
The Fear of Losing Control

When anxiety thinks for you, everything starts to get blurred. It's easy for the fear of losing control to have a grip on you because it's the most difficult emotions…

Psychology
The Challenge of Accepting Things that Happen to Us

Accepting things that happen to us is the first step towards change. In order to accept the most painful things that…