7 Steps to Happiness According to Hinduism 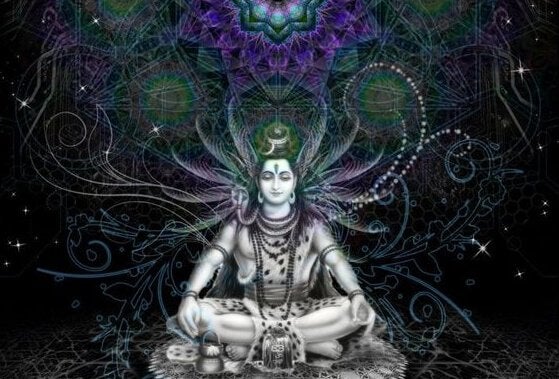 Hindu legend tells the story of the only happy man in an ancient kingdom. In this place, there lived some very wealthy people, but they couldn’t enjoy their wealth. They always wanted more. That’s why they invested most of their time into doing business and increasing their fortune. Others, on the other hand, were very poor. They weren’t happy either, because they dedicated a good part of their lives to dreaming and dwelling on the things they didn’t have.

When the rumor got out that there was a man that was completely happy, everyone was very interested in meeting him. They said that this man had a chest and inside it resided all of the secrets needed to obtain happiness. The wealthy sought him out and wanted to buy the chest from him, but the man refused to sell it. The poor begged him, but the wise man didn’t budge. They even tried to rob him but weren’t successful.

“We seek happiness, but without knowing where, like drunken men who search for their homes, knowing only that they have one.”
-Voltaire-

After a while, a child arrived to where the man was with his prized chest. He told the man that he also wanted to be happy. Upon seeing the child’s innocence, the happy man was moved. He told him that happiness was like a ladder and that each step towards it required a new lesson learned. That’s how he showed him the 7 steps to being happy.

Step 1. Cultivating self-love in order to be happy

The man with the chest told the child that the first condition to being happy is loving oneself. Self-love means feeling worthy of happiness. In order to achieve this, you have to give your life value. Take care of your health and physical well-being.

It’s also necessary to understand that we are unique beings in this world. That means that each one of our virtues and defects are the result of a unique history in the universe. We aren’t any more or less than anyone else, simply the effect of millions of unrepeatable causes.

One of the things that can make people the most unhappy is thinking about being the best, or of having a better life, but simply leaving it as a thought. This only leads to frustration and guilt. If you think you can or should do something, simply do it. You don’t have to hesitate or ponder so much over it.

It is also important that your actions be consistent with your words. And, of course, with your thoughts. If you think a certain way, but act another, you will only create confusion. Instead, when there is harmony in your inner world, everything flows much more easily.

People who spend their lives thinking about other people’s accomplishments, before considering their own are creating a path towards bitterness. You never know what another person has gone through to achieve or acquire what they have. Thus, you’re not fit to judge whether they deserve it or not.

Instead of thinking about whether others will make it or not, take care of your own success. If you allow envy to bloom within your heart, you’ll suffer. And your suffering will be useless and destructive. If you manage to feel happy for the success and accomplishments of others, your happiness will be double. You’ll have more strength within your heart to reach your goals.

Sometimes we receive insults, and they are so strong that the pain remains forever stuck within our heart. With the passage of time, the pain turns into frustration. And this later on turns into rage. You end up playing host to a very negative feeling, and this ends up paralyzing you.

Resentment is another of those useless passions, which greatly harms the person who harbors it. Life has its own logic. That’s why, when confronted with an insult you should remember that the person who caused it will get justice on their own. Sooner or later everybody reaps what they sow. That’s why, everyone should strive to forgive, forget and let go.

Step 5. Don’t take what doesn’t belong to you

According to Hinduism, everything that you take illicitly from others brings about serious consequences. Over time, he who committed the crime will be stripped of something of much greater value. Not respecting other people’s possessions also makes it so that whatever you acquire will eventually simply vanish.

This doesn’t apply only to material goods. It also has to do with the appropriation of ideas, affection or benefits that don’t correspond to you. For Hindus, this type of act of disrespect leads to moral and material ruin for the individual.

Step 6. Eradicate abuse in your life

No living being should ever be abused. This includes people and, of course, also plants and animals. He who manages to interact lovingly with life will manage to be happy. All living beings are a source of joy and well-being, that’s why they should be valued.

This, obviously, implies a radical refusal to being mistreated. It’s good for you to be firm, to reject any situation or person that mistreats or abuses you. No form of abuse is “for your own good” or for the good of anyone else. To evolve, or correct mistakes, it’s not necessary to withstand destructive treatments.

Step 7. Be thankful every day of your life

It’s very simple, and it has a very powerful effect on your emotions. Every day you have reasons to be grateful, have no doubt about it. If your acquire the habit of making the words “thank you” the first you use every day, you’ll see how your life simply fills with color.

This simple ritual changes lives. When it becomes a habit, it will place you in the position of goodness and good disposition towards everything. It makes you feel happier, and it turns you into a more generous person. Furthermore, it allows you to have a clearer sense of all of the value that your life has.

We already mentioned that the 7 steps to being happy are like a ladder. One follows after the other. They constitute an evolutionary process that leads to inner peace. That peace is the only indispensable condition for you to achieve happiness. And being happy means reaching a state in which the individual accepts themselves, with nobility and intelligence, all of the vicissitudes of life.

Wellness
Walking Is Worth It, Even if You Fall

Walk, walk, walk. Never get tired of walking, because that's where you find your reason for being, your will to…

Wellness
When The Time Comes to Say Goodbye to Your Children

Saying goodbye to the people you love most is not easy and even less so when they are your children. As…

Wellness
The Anger We Harbor is the Most Dangerous

If you're angry, why pretend? Yes, often you pretend, and don't say you don't. On many occasions, we pretend not…

Wellness
Neglect Is the Wound That Lasts the Longest

Neglect from our partner, from our parents in childhood, or even from society itself creates a wound that cannot be…