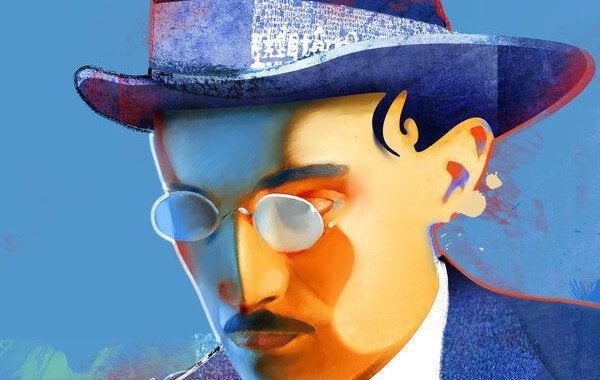 Fernando Pessoa is one of the greatest poets of all time. He was born in Portugal and lived at the end of the 19th century and the beginning of the 20th. For some he is one of the most enigmatic figures in literature. For others, he is a magician who dived into the depths of the human soul and left some verses full of intelligence and wisdom as a legacy.

One of the most mysterious aspects of Pessoa was his obsessive use of heteronyms. These heteronyms were imaginary characters who featured as authors of his work. Some of the best known were Alberto Caeiro, Alvaro de Campos, Bernardo Soares and Ricardo Reis. He himself published criticisms of these hypothetical authors, who were none other than himself.

“I think that by saying something we enable it to keep its virtue and strip it of its terror. The fields are greener if we speak about them, more so than in their actual greenery. The flowers, if they are described with phrases that define them in the breath of our imagination, will have colors with a permanence that the cellular life does not allow “.

The most interesting thing is that these heteronyms were not just pseudonyms. Each one had its own personality, character, and style. Those who have studied his work sometimes even question whether Fernando Pessoa was actually his true identity. Whatever the case, he has left us some extraordinary work. We are now going to highlight seven of his most memorable quotes and we invite you to reflect on them.

The unconscious – a recurring theme with Fernando Pessoa

The work of Fernando Pessoa is very philosophical in its content. His reflections are sharp insights into the logic of our existence. In the following quote, for example, he shows the paradox of both thinking and not thinking, “Being conscious of the unconsciousness of life is the most ancient duty for our human intelligence”

This quote is a striking one because it lays bare an interesting contradiction. It is through intelligence and consciousness that we discover the existence of the unconscious. The latter is inaccessible, since it is unconsciousness, and as such doesn’t have full access to reason. And so, in this way, we only get to know what we have previously overlooked.

On how we should observe the world around us

A look defines identity. At the same time, identity defines the look. So both realities are always together. That is what is reflected in one of his most wonderful phrases, “My size depends on what I am looking at, not on my own physical dimensions”.

This means that the wider the perspective, the greater the person who is looking. And the opposite is also true – he who has little vision has been invaded by lowliness. Height, in a figurative sense, defines our way of seeing reality.

Know yourself and think

Pessoa was always fighting against his thoughts. Doing this can free us, but it can also imprison. It grants us the joy of understanding, but at the same time it takes away the freshness of life. The poet recognizes this fact in the following quote. “Not knowing about oneself is living. To ponder on our bad points is to think “.

What he is trying to tell us is that the most genuine things in life are just simply lived. This is true abundance. On the other hand, just thinking all the time is a limited exercise, which only leads to partial results and deprives us of fully experiencing our existence. Life is stronger than thought.

What is love anyway?

Pessoa defines love as building up thoughts with our imagination. We can see this in the following quote, “We never love anyone: we only love the idea we have of someone. We just love our own concept of love, we just love ourselves. “

Ultimately, he thinks that love is a selfish projection. We see in the other person what we want or need to see. We never see what they’re really like, and never get to really know them. We just conceptualize and fall in love with that conceptualization.

An exception for which there is no standard

For Pessoa, each individual is an infinite reality. He says that we can’t build up generalizations that are valid for each and every person. That’s why he wrote the following, “There are no rules. All men are exceptions to a rule that does not exist. “

The denial of a common standard for human beings means an exaltation of individual particularity. Although we may seem to share common features and traits, each person is a different and unique world. In this sense, there is no way we can create a rule that can be applied to everyone.

Success and its mysteries

For this famous Portuguese poet, success is something that needs to be built. “Success is being successful, not having conditions for success. Any large piece of land has conditions for the building of a palace, but where will the palace be if they don’t build it there? “

With this wonderful phrase, Fernando Pessoa downplays the idea that talent is your potential. It is not so much the virtues or abilities that you have to carry out that define your talent, but rather it is what you do that determines your abilities and what really counts.

When speaking about death, he said, “To me, when I see a dead person, it seems like a departure. The corpse gives me the impression of an abandoned suit. Someone departed and didn’t need to wear that unique clothing he had been wearing any more”. This beautiful phrase speaks of the body as just a facade of who we really are. In death, someone’s presence left us. The dead body doesn’t represent that person any more. The one who dies is simply no longer there.

Fernando Pessoa is one of those poets one can never forget after having read his works. His poetry mixes an exceptional sensibility, with an admirable lucidity. In his verses and in the lines he wrote there are wonderful revelations that can really shake our beliefs.

Psychology
Annalise Keating: The Relationship Between Power and Alcoholism

Many people in powerful positions experience high stress levels. It's very important to learn how to manage this stress appropriately, especially if…

Depression is not a homogenous diagnosis. It changes according to the specific characteristics and context of each person. Things like age group, gender, and socioeconomic level affect how depression manifests…