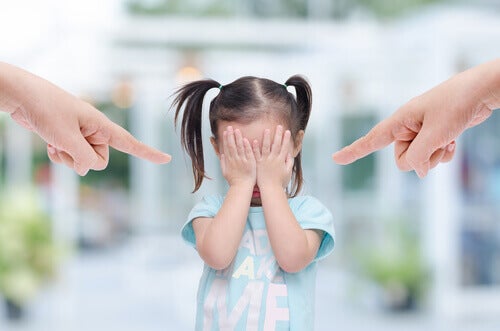 What happens when the people who are supposed to protect and take care of you end up hurting you and making you feel bad? What features  characterize toxic parents?

Some parents go way beyond just making mistakes and instead display harmful behavior that affects the emotional growth of their children. It’s not that they abandon or neglect them, but sometimes the way they interact with them and exercise their authority as parents is inappropriate.

Nobody is born knowing how to be a parent

Of course, people aren’t born with a parenting handbook pre-programmed into their brains. We all have to face those first few sleepless nights with the baby, not really knowing how to handle them or stop them from crying. It’s normal to have doubts about what to do or whether you’re being a good parent. The secret to good parenting is healthy attachment, affection, understanding, and patience.

However, not all parents follow that model. Toxic parents do just the opposite and hinder the growth of their children. Let’s take a look at a few examples.

If you’re not the best, you don’t exist

Some parents demand perfection from their children. They’re extremely critical of them and want nothing but for them to achieve excellence in all things. They’re so demanding that their children start to feel humiliated, anxious, and disappointed in themselves.

This method of parenting makes children very tense and anxious. On top of that, the emotional damage that they suffer is even greater if their parents are constantly reminding them of their mistakes. The extreme pressure prevents them from being able to fully enjoy their achievements.

Parents like this often plan out their children’s professional future. It’s their way of controlling them. They force them to live the life that they have built for them and don’t let them make their own decisions or follow their own path.

With me or with no one

These parents are excessively and compulsively protective. They don’t let their children go to their friends’ birthday parties or to the movies because they’re afraid something bad might happen.

They’re afraid of being alone, so they don’t let their children have any semblance of independence. That doesn’t mean that it would be better to let them do whatever they please, but too much control is just as damaging as too much freedom.

Children have to grow up increasing in autonomy as they get older. It’s important to let them do things outside of the house. But overbearing parents make them feel guilty for wanting to be with other people. Naturally, the situation only gets worse with adolescence, especially when they start getting new friends and relationships.

I dare you to be better than me

As difficult as it is to understand, some parents compete with their children. For example, it’s common to see rivalries between mothers and daughters over their physical appearance, or fathers who ridicule their sons for being better than them at sports.

These parents have usually had some dream  crushed in their own childhood, or had parents who did the same with them. Thus, they release the frustration that they’ve accumulated over all that time by taking it out on their children. They blame them for their own misfortune, which is quite a damaging way to release their anger.

Give me what I want

Another example of toxic parents are those who adopt a manipulative attitude, whether consciously or not. For example, they tell their children things like, “nobody will take care of you like I do,” or “don’t go out tonight, you already know it makes your mother so nervous, you wouldn’t want me to end up in the hospital, would you?”

As experts in detecting other people’s vulnerabilities and weaknesses, they believe they have the power and the right to get whatever they want, even at the cost of their own children. They take advantage of childhood innocence to make them do what they want.

We frequently stress the importance of healthy attachment during the first few years of life. The bond developed between a child and their parents and other important figures in their life will determine much of their later development.

Therefore, if parents deprive their children of affection, don’t show them that they care, or simply don’t form an emotional bond with them, the repercussions can be very serious. The family dynamic should be based on love and trust. If not, the child’s future relationships could suffer.

The behavior of toxic parents

We also can’t forget that children learn by imitation. Therefore, they easily pick up on all the habits, customs, and behaviors that they see in adults. Be careful what you show your children, whether in word or deed. They absorb it all, and once they do, it’s hard to reverse. Parents are role models for children, including toxic parents, unfortunately.

In the same way, we have the power to teach them healthy habits — to feed them well, exercise often, avoid alcohol and other substances, sleep on a healthy schedule, etc. If these habits aren’t ingrained from an early age, it’s a lot harder to do it when they’ve already gotten accustomed to other routines.

Of course, each family has their own circumstances, but there’s no excuse to hurt your children. Toxic parents don’t seem to be aware that they’re raising their children the wrong way or causing severe and potentially chronic harm, so recognition is the first step.

The Experience of Children With Divorced Parents
Many parents think that only they are directly affected by their separation. However, this isn't true when there are children involved. Read more »
Link copied!
Interesting Articles
Psychology
Spending Time Outdoors Benefits the Mind and Body

Walking outdoors is fun and healthy for the body, and it's also good for the brain and mind. Anybody who…

Psychology
Is It Bad to Think Too Much?

Do I think too much? Have you ever asked yourself this question? If you're nodding, then you're right, you think too much. But don't worry, I do, too. In fact,…

Psychology
How Can We Help Children Solve Problems

Children need to learn how to solve their problems themselves. In fact, resolving problems is one of the most important skills for…