5 Telltale Signs that a Child is Being Bullied 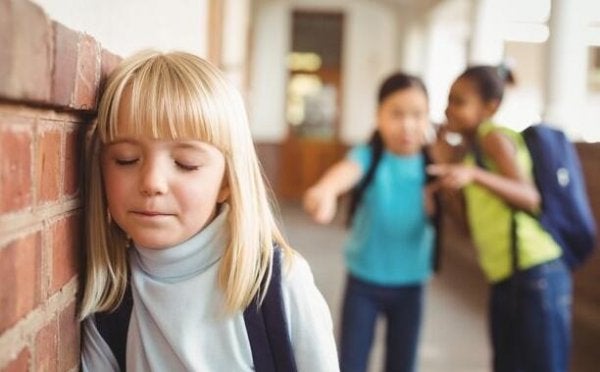 It’s not always easy to see the subtle signs that a child is being bullied. A bullied child is often silent about what’s happening. The bullies, to ensure that the victim doesn’t give them away, threaten the victim.

Bullying has existed for a long time. However, it has increased and intensified in recent years due to several factors. In fact, the biggest factor is how accessible new technologies are that facilitate depersonalization.

“People who love themselves, don’t hurt other people. The more we hate ourselves, the more we want others to suffer”.

You never know what the consequences may be when a child is being bullied. Sometimes they find a way to cope. For others, it affects them so much that it compromises their emotional stability. In other cases, it causes them to sink so far that the consequences are dire. That’s why it’s important to be alert to the signs that a child is being bullied. Here are five of them.

Firstly, when child is being bullied, they may have physical symptoms. They tend to be generalized problems. The most common ones are headaches, nausea, and dizziness. It’s also very common for them to lose their appetite or change their eating habits. They might refuse to eat something that they liked before. They also often start to have problems falling or staying asleep.

Behavioral changes are telltale signs that a child is a being bullied. They almost always turn inward.They look thoughtful, quiet and sad. However, if asked, they say they’re okay, nothing’s wrong.

Additionally, they will most likely become irritable and intolerant, in a bad mood much more often. They express themselves passive-aggressively, like not answering when spoken to, or pouting. It’s as if they are annoyed or irritated all the time.

Grades at school will usually reflect it if a child is being bullied. Normally, the child gets absent-minded. They forget to do their homework, they misinterpret the teacher’s instructions, or they simply don’t want to do school work.

A bullied child seems mentally absent and doesn’t follow through on things. They tend to be distracted, sometimes saying they don’t understand the explanations given in class. It’s also common for them to have a hard time getting up to go to school and to try to stay home by giving excuses.

When a child is being bullied, they tend to get isolated. They don’t want to do extracurricular activities anymore. They stay at home much more and show no enthusiasm for hanging out with or playing with their friends. The child may be in school during school hours, but don’t expect them to stay even a minute after the bell rings.

As the days go by, their friends also stop calling them. The child may start getting into solo activities, such as video games. Or they’ll spend a lot of time on the computer.

Finally, from time to time the child may get home with signs on their body indicating that they have been physically mistreated. For example, there may be bruises or scratches. However, if a child is being bullied, they’re not always beaten. Sometimes other children “just” harass them and chase them to take their snack or laugh at them.

The child will probably refuse to talk about what’s happening to them. They may even be aggressive if you insist on questioning them about it. Despite this, when you suspect that a child is being harassed, do not let them push you away. Insist, without pressuring them, and keep calm.

If the child doesn’t tell you, it may also be because they do not trust your ability to handle the situation. Maybe they’re afraid that you will lecture them, or that you’ll create a problem in school that will just make things worse. So the first thing to do is try to increase their trust in you. Then go on to show that you are there to support them and that things will change.

5 Tips to Detect Cyber Bullying
People have come up with a number of actions to prevent and combat abuse in different contexts. Much of the work has focused on the school and work environments. Traditionally, bullying happens face-to-face, with insults, harassment, or physical aggression. Read more »
Link copied!
Interesting Articles
Psychology
Aboulomania: When Indecision Becomes Pathological

We've all had to make a tough decision sometime in our lives. During these moments, we start doubting ourselves and we…

Psychology
A True Friend Shows Up When Everyone Else Is Gone

A true friend will never leave you. In the darkest moments of your life, when everything may seem to lose…

Psychology
Obesity - How Can A Psychologist Help?

Obesity is a health problem that involves different physical, genetic, psychological, and environmental factors. Aside from being an aesthetic problem, the…