5 Techniques to Avoid an Aggressive Conversation 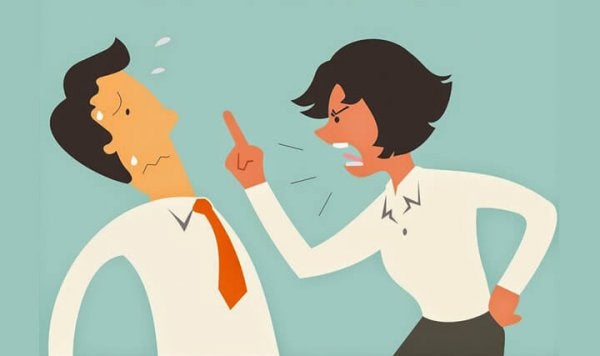 People say that, in order for there to be a fight, at least two people need to clash with each other. This means that it isn’t necessary for there to be a desire to have a conflict, but the desire of not avoiding one. This desire seems innocent because it can be satisfied with a passive attitude, but it can make us take part in a confrontation without even realizing it. That’s why it’s important for you to learn how to avoid an aggressive conversation.

People talk to understand each other. However, this is hard to achieve when passion is the main focus and both parties maintain a distant position. In those cases, it’s very important to be careful and not encourage an aggressive conversation.

How can we avoid aggressive conversations? It can be easy to do if we automate certain strategies and use them when we feel like the conversation is getting heated.

Many people know this technique as “the broken record”. It consists of repeating your point over and over again and ignoring any affirmation that doesn’t come close to it. This is a way of redirecting the conversation to reassure ourselves and avoid falling into the other person’s aggressive traps.

This technique helps avoid aggressive conversations because it helps maintain the discussion in rational terms. You keep a goal in mind. When you focus on it, you’re able to neutralize any other message that could affect your emotions and distort the actual purpose of the conversation.

This is an effective technique especially when the other person keeps filling the conversation with indirect messages destined to make us feel bad. It consists of keeping our dialogues as short as possible in order to make the other person express themselves more explicitly.

The goal of this technique is to help you avoid insinuations since most of them are aggressive. They tend to cause confusion and conflicts. If you make yourself clear and make sure the other person understands what you’re saying, you’re going to succeed at avoiding aggressive conversations.

Keep in mind that you’re not always right

During a confrontation, both parties tend to believe they’re right. Both parties, in order not to seem vulnerable, tend to make affirmations even when they’re not sure of them. Keep this tendency in mind and control it. This lowers the probability of aggressiveness increasing during a confrontation.

Expressing that the other party is also right can eradicate conflicts even before they start. When you do this, you make it less possible for the conversation to end up in disagreements, thus avoiding aggressiveness.

This technique has to do with deliberately ignoring the things that offend or bother you in any way. You should only focus on the main aspects of the discussion. In this sense, it’s particularly based on ignoring the other person when they don’t express themselves to you appropriately.

The other party will soon notice that their words seem to have no effect on you and they’ll decide to give up. The right thing to do is focus on positivity in order to get the conversation out of the negative hole the other person tries to insert it into.

Apply this technique if the other person starts accusing you of things. The ideal thing is to focus on one issue first, and then the rest. If you pay attention to all the issues at once, it’ll be harder for you to choose the right strategy to use.

Without realizing it, the other person will want to start a conflict. They’ll do whatever it takes to drag you into it. It’s very common for people to accuse others of things. They attack in order for the other person to automatically react.

It’s true that most disagreements are healthy and enriching. However, we turn them into negative things when we focus only on defending our position. This is a mistake that leads to an aggressive conversation. And nothing good comes out of these types of conversations!

A Positive Conversation Can Change Your Brain!
How wonderful it is to have a positive conversation! It fills us with energy and spurs us on. Read on and find out how we can change our way of speaking and brings many positive benefits to our lives. Read more »
Link copied!
Interesting Articles
Conflicts
5 Tools to Help You Resolve Problems and Conflicts