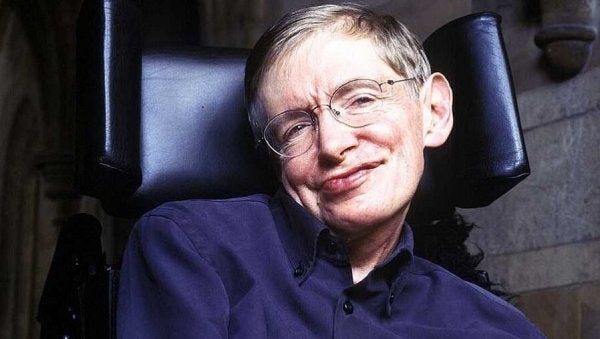 Stephen Hawking is, without a doubt, one of the greatest minds of our time. Beyond his important contributions to the world of physics and the origin of the universe, his is a story that has the quality of legends.

On January 7, 2016, Stephen Hawking gave a lecture at the Royal Society. Its content was recently broadcast on the Internet. Unlike what many might think, the central theme of his lecture was not the mysteries of the Big Bang, or of light or space. Hawking decided to talk to people with depression and other emotional problems.

”No matter how difficult life may seem, because you can lose all hope if you can’t laugh at yourself and life in general”.

His message has enormous value. Not only because it comes from one of the most amazing brains of our time, but mainly because he himself is an example. He has lived a much harder life than the average person. However, he has remained firm in the struggle for his goals and dreams. So he can speak about sadness with great authority.

Stephen Hawking was born into a family that deeply appreciated the value of knowledge. His father was a prestigious biologist. Stephen was the eldest son and he also had two sisters and an adopted brother. As a child he was a good student, but never one of the brightest. He ended up studying natural sciences at Oxford, majoring in physics.

At age 21, Stephen Hawking was diagnosed with Amyotrophic Lateral Sclerosis or ALS. A neuromuscular degenerative disease. He was about to get married and the doctors did not give him more than 2 or 3 years to live. However, against all odds, today he is still alive at 76 years old. Despite having lost his motor skills over the years.

In spite of everything, Hawking has led a happy and productive life. He has received 24 awards for his work. Among them, the Albert Einstein Medal and the Princess of Asturias Award. His conceptualization and description of black holes are his main contributions to physics.

Life has not been easy for Stephen Hawking. He has been forced to swim against the current due to his illness. However, the progressive loss of his ability to move has not prevented him from continuing with his work, with his family life and with his role as a great beacon in the scientific and human world. He always looks happy. He jokes and is interested in how life is going for other people.

At his 2016 conference, he specifically addressed people who are depressed. Making a comparison with physics, he said: “The message of this lecture is that black holes aren’t as black as they are painted. They are not the eternal prisons they were once thought. Things can get out of a black hole both on the outside and possibly to another universe. So if you feel you are in a black hole, don’t give up; there’s a way out “.

This was doubtless a call for hope. His words invite us to not give up because there is always a way out. This is coming from someone who, from his most tender youth, has had to live tied to a wheelchair and unable to lead a life like others.

Stephen Hawking is living proof that the important thing is not what happens, but the attitude we choose to face it. At the same conference he said: “Although I was unfortunate to get motor neuron disease, I have been very fortunate in almost everything else. I have been lucky to work in theoretical physics at a fascinating time, and it’s one of the few areas in which my disability was not a serious handicap “.

The message is clear. His great lesson was that he didn’t focus on everything that life deprived him of. Quite the opposite. The lesson is make the most of what you do have, what you can do, what you can enjoy. Sure you have gone through many moments of despair. The important thing is that you have been able to overcome them and become what you are today.

Hawking also spoke of the importance of accepting reality as it is. He indicated that it is not smart to get carried away by negative emotions. These only make everything worse and prevent you from being happy with what you have. The crowd applauded him after his speech. Now, his words resonate, and can surely echo in those who need a voice of encouragement.

The Effects Of Positive Thinking on Happiness
We are always wanting more and more, always looking for happiness and never finding it. Find out how positive thinking can help us in this. Read more »
Link copied!
Interesting Articles
Wellness
Don't Let People Drag You through Their Storm

Everyone gives what they have inside to others, whether it's agreeable or not. However, it's not other people that hurt us.…

Wellness
Taking Action When You're Full of Fears

We've all had a fear that kept us from taking action. For example, now you may be afraid that your…

Sometimes we tolerate harmful situations and people for far too long, just because we follow the tacit command “if there…

We are a society where suffering remains a silent stigma. We take pills for life's pains, we treat our high…