11 Different Types of Families in Our Modern-Day Society

These days, there are many different types of families, and each one of them responds to new realities. Having children, or maintaining lifelong relationships, is no longer as relevant as it was in the past. Likewise, new genders have also appeared. 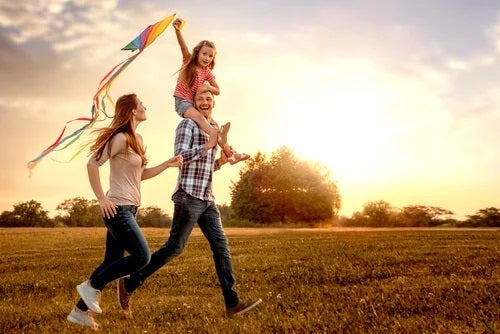 If anything has changed in recent times, it’s our idea of what a family is. Nowadays, there are many different types of families, and this has changed our view of what we once considered to be the traditional structure. Until not too long ago, the conventional composition was the dominant one, but this is no longer the case.

Social transformations have been taking place in leaps and bounds. The truth is that different types of families have existed for a long time, but it’s only in the last few decades that they’ve come to light and started to spread.

Until quite recently, people thought that, if the traditional family structure didn’t prevail, then there was no family. On the other hand, these days, we understand that a family environment doesn’t depend on a certain composition. The fact of the matter is that it’s the nucleus from which we socialize with the world around us.

The different types of families

This was the most widespread type of family until a few decades ago. It was composed of a father, mother, and children, as well as grandparents, aunts and uncles, and cousins, etc. It wasn’t uncommon for them to live together under the same roof and function as a unit. These types of families still exist, but they’re much less common these days.

This is one of the main family types these days, although it doesn’t hold an absolute majority. According to some estimates, the nuclear family represents a quarter of today’s families. It consists of a father, mother, and children. It doesn’t include other relatives but maintains the basic traditional structure.

This is a type of family that has increased noticeably in recent times. In these families, the parents are divorced, although each of them continues to exercise their role in one way or another. In these cases, there isn’t a total absence of one or other of the parents; they just don’t live under the same roof.

This is the type of family where two separated people with children form a new family nucleus. This way, the children of each one become like “de facto siblings”. It’s one of the most complex configurations, as it demands considerable effort when it comes to defining and taking on new roles.

This is another type of family that’s on the increase. In these types, one of the parents is permanently absent, and it’s usually the father. However, there’s an increasing number of cases where it’s the mother who leaves home.

In these cases, it’s often an overwhelming burden for the father, and he usually enlists the help of other people, who also begin to have an important influence on the children.

Families who adopt do so either because they haven’t been able to conceive or due to a direct desire to adopt. They usually form stable homes, although there’s a minority of these homes where the adopted children are just expected to respond to social expectations and, as a result, don’t receive all the affection they should.

This type of family structure is also on the rise. This is when couples decide not to have children nor to adopt them. They’re usually people of high social status and with great professional expectations.

They don’t see the role of a parent as a satisfying one and see their partner mainly as a partner in life and objectives.

This is one of the newest family types. These are same-sex couples who adopt a child and form a stable family nucleus. The existence of this type of family is not yet legal in many countries and, because of that, there still isn’t enough research available to determine to what extent it affects children’s upbringing.

This occurs when parents are left alone after their children become adults and leave home. Most often, after overcoming the grief of the “empty nest”, the couple “redesigns itself” and they form new joint plans and projects together. Couples who reach this point usually form a very supportive and tolerant family unit.

Permanent singleness is also one of the options that’s increasing these days. Experts estimate that around 11 percent of today’s families are single-person families. These are people who decide to live alone and shape their relationships with the world from this stance.

Sometimes, there are also one-person families where the person is widowed, or also after a divorce following a union that didn’t produce any children. This type of family no longer arouses surprise or suspicion, as it did before.

This type of family is very typical of the so-called “millennials” or “generation Y”. They make pets a fundamental part of their lives, almost as if they were their children.

There’s still no agreement on how helpful it is to humanize animals to this extent. What’s clear is that this type of attachment, in many cases, satisfies the needs of humans more than those of pets.

There have been widespread, significant social changes in recent years. This is reflected in how different social groups are configured, including one as important as the family.

In this article, we’ve brought you the most common types, but there are many others. This dynamic society we live in will also create many more as it adapts to social change.

Family Love: Acceptance, Understanding and Protection
Family love is the backbone of our world. A large part of who we are is due to the early experiences and bonds we create with our parents. Read more »
Link copied!
Interesting Articles
Culture
Noah Wall, the Story of the Child with Brain Growth

Many of you might have never heard of Soichiro Honda. But there aren't many people in the world who've never…

Culture
Feeling Underappreciated: What Can You Do?

"I feel underappreciated, both at work and at home." Many people experience this feeling at some point in their life.…