Family Myths and Their Effect

Family myths function to cover up aspects of the family that cause pain, shame, or guilt. These myths survive because they protect, defend, and help organize the family structure, keeping secrets safe that are passed from generation to generation. 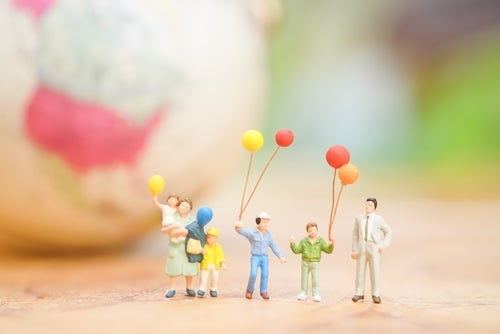 Family myths are fictitious beliefs and hopes shared by an entire family. These beliefs are related to the family and are part of the ties that bind the family together. The myths are assumed to be true and determine both individual and collective group behaviors. They also determine each person’s roles.

The most common type of family myths are preconscious. In other words, they’re on the border between the conscious and unconscious. While the family admits to having certain beliefs, it isn’t clear what extent these beliefs reach or why those ideas are considered valid.

Although family myths are defined as fictitious, the truth is that there are almost always painful or intolerable truths behind these beliefs. In general, the clues to these myths are found in secret or implicit rules that each family group implements.

The characteristics of family myths

One characteristic of family myths is that they take shape mainly in terms of assigning roles in the family. These beliefs define who’s the “black sheep” or the “role model”, and so on. Often, there’s strong resistance to changes in these roles. It can even become a taboo subject.

Other characteristics of these myths are the following:

Harmony myths correspond to families that build an idyllic image of themselves. They develop a whole series of behaviors to convince themselves that there’s balance, unity, and connection among all their members. These myths make it seem like there are no problems within the family.

Generally, this type of family creates this image in front of others. There might be guilt they want to cover up or present perfect harmony to prevent any investigation or judgment from others. However, these families often experience depression or boredom, as well as strong unresolved hostilities.

Family myths of apology and reparation

These myths are a bit more complex, as they involve deeper issues. In this case, the responsibility for misfortune or family problems is placed on one or more people in the family. These people can be alive or dead. Sometimes, someone who’s outside of the family, but closely related to it, could be blamed.

The most obvious example of this is the “scapegoat“. This is the person who others blame for what isn’t working well in the family or the problems that exist. Then, this relieves other members of the family from responsibility. Projection is a fundamental mechanism of these myths. In this case, it’s collective projection.

When there are family myths of salvation, family members construct the figure of the “mythical savior”. This is a character that all others expect redemptive intervention from, either in the face of a specific problem or general issues. In fact, other family members believe this savior has the power to provide what the family needs or figure out what isn’t working.

The mythical savior can be one of the family members, but it can also be someone external. It’s very common for family groups to assign this role to a psychologist, for example, when the family is in the process of therapy.

The more pathological family relationships are, the more frequently these myths tend to appear and consolidate. However, these are the wrong paths to go down and prevent addressing the real problems that need to be fixed.

Family Secrets Can Negatively Impact Your Life
Family secrets are an invisible burden. You can sense them, but their hidden nature makes it impossible to process them and deal with them in a healthy way. Read more »

Pacts of silence are generally agreements that people make without acting saying anything about it. They involve a commitment to say…