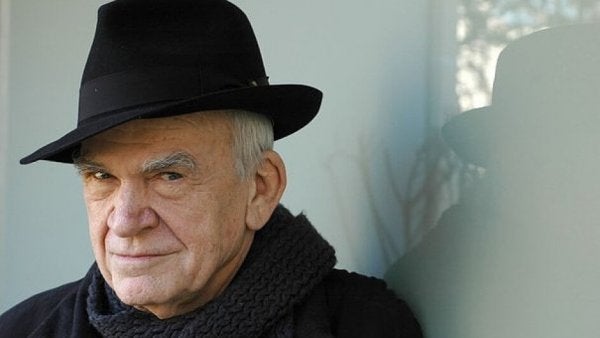 All of Milan Kundera’s quotes are works of art. Most of them are part of his wonderful and extensive literary work. Not only do his novels contain beautiful plots, but also a profound reflection on the world and modern man.

Milan Kundera was born in Czechoslovakia in 1929. However, he moved to France in 1975 and became a French national in 1981. In spite of living away from his home country in his later years, much of his work is about life in Czechoslovakia.

In Milan Kundera’s writing, we discover an intelligent writer with the ability to delve into the labyrinth of the human subconscious. For years now, people have been expecting him to win the Nobel Prize for Literature because of the quality of his writing. Here we present an interesting (though incomplete) selection of some of his best quotes.

“The heavier the burden, the closer our lives come to the earth, the more real and truthful they become.”

One of the unforgettable quotes of Milan Kundera

This thinker isn’t just a great novelist. He has proved himself to be a great philosopher of our times. His vision of the world is deeply realistic and, at the same time, very moving. One of his great virtues is knowing how to capture subconscious motivation.

This is precisely what many of his quotes reflect – a thorough understanding of human beings. That idea is captured in this interesting text about our obsession for order:

“Our longing for order tries to turn the world of men into the kingdom of the inorganic, in which everything moves forward and operates under an impersonal order. Longing for order is, at the same time, a longing for death. Because life is a permanent alteration of order.”

Power and the world

Nearly all of Kundera’s Chekoslovakian’s work is shot through with themes of power. He is very critical of power and its morals. In this quote, for example,

“For in this world everything is pardoned in advance and therefore everything cynically permitted.”

Kundera lived under strict Soviet rule. Limitations imposed by the regime on thought and expression made a significant impact on him. Another of Milan Kundera’s quotes says,

“One banned book in your country means infinitely more than the billions of words spewed out by our universities.”

He is right. The secret to what power wants to foster is in the things that it bans.

The same thing is true in this quote, “The struggle of man against power is the struggle of memory against forgetting.” Power reproduces human vice and meanness. Each powerful figure tries to make everyone believe that it all starts with him or her. However, so often, history simply repeats itself. Memory is the only thing that breaks the cycle.

Love is one of the themes present in all of this author’s work. In The Unbearable Lightness of Being, he relates it to a fortunate coincidence. In this book, he writes,

“If a love is to be unforgettable, fortuities must immediately start fluttering down to it like birds to Francis of Assisi’s shoulders.”

Many Milan Kundera quotes also deal with indifference and forgetting. This one, for example, speaks of the subject in a beautifully poetic way,

“In the sunset of dissolution, everything is illuminated by the aura of nostalgia.”

Once someone, or something, is no longer with you, reality is covered with an evocative and magical veil.

Fear, and the others

“The source of fear is in the future, and a person freed of the future has nothing to fear.”

The main cause of anxiety is that which hasn’t occurred yet. The possibility that it might happen invites fear into our lives. The truth is, we tend to fear the products of our imagination more than real life.

When faced with the world, we always experience a break, a division, a strangeness. Kundera says it like this,

“We will never know why we irritate each other, what it is that makes us kind, or ridiculous. Our own image is our greatest mystery.”

Many of Kundera’s quotes talk about fragility and compassion. In fact, animals have a privileged place in his writing. As much as for what they are, as what they represent.

“Humanity’s true moral test, its fundamental test, consists of its attitude towards those who are at its mercy – animals.”

“For there is nothing heavier than compassion. Not even one’s own pain weighs so heavy as the pain one feels with someone, for someone, a pain intensified by the imagination and prolonged by a hundred echoes.”

In other words, sometimes it hurts more to watch a loved one suffer than to suffer yourself.

In conclusion, these Kundera quotes are a small part of his wonderful work. It’s not for nothing that he is one of the most admired contemporary writers in the world. He, unlike so many, managed to capture the essence of our time. And then he expressed it in a beautiful and astonishing way in his writing.

5 Ways Your Mind Deceives You When Your Heart Is Broken
Our mind can so easily deceive us when we have a broken heart. Read on and find out how we can ignore its voice and take steps towards healing Read more »
Link copied!
Interesting Articles
Culture
8 Questions to Get to Know Someone Better

When we want to get to know someone better, we usually think of questions that can help us figure out…

The Savanna Happiness Theory emerged from conclusions drawn from a scientific investigation published in the British Journal of Psychology. Although it…

"The Lucifer Effect: Understanding How Good People Turn Evil" is the title of a book by Philip Zimbardo. In it,…

Raising children isn't easy. It can destroy family relationships if we don't do it the right way. We need a ton…