Zygmunt Bauman: How Facebook And Social Media Trap Us 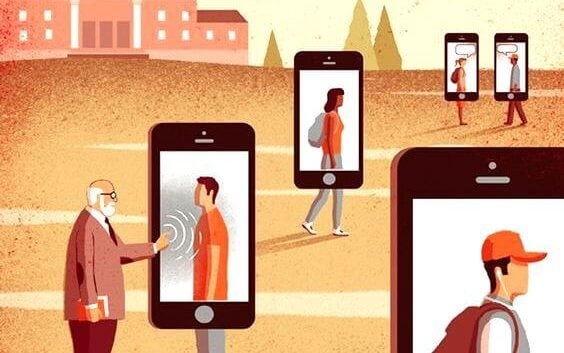 Zygmunt Bauman is a Polish sociologist who has gained fame and recognition thanks to his book Liquid Modernity. In it, he denounces the fact that postmodernism has brought with it the collapse of “solidity”. Nothing is solid or firm anymore. Everything is temporary, transient and changeable. And one of his greatest attacks is on the phenomenon of social media.

Growing up was not easy for Zygmunt Bauman. He had to flee his own country, persecuted by the Nazis. Finally he managed to settle in Israel and in the seventies began to surprise the world with his theses. He has won several awards, including the renowned “Prince of Asturias” award, in 2010.

Zygmunt Bauman made a stark analysis of the contemporary world. His biggest and most recent recent thoughts are on the internet and social media. He does not see any great virtue in them. In fact, he defines them as modern-day traps that people fall into and are perfectly happy about it.

Here is a startling quote from Zygmunt Bauman: “The founder of Facebook, Mark Zuckerberg, has earned $50,000,000,000 with his company, benefiting from our fear of loneliness. That’s what Facebook is”. In reality he’s not just referring to Facebook, but to all social media.

The sociologist has emphasized that the genius of Mark Zuckerberg was realizing how much humans fear being alone. On social media, loneliness doesn’t seem to exist. There is always someone “there” willing to read our concerns and praise us for sharing them with a supportive “like”.

People now seem quite happy to be part of totally trivial conversations — all in the name of “staying connected”. Our days are no longer spent in the company of other people. Our most faithful partner on a daily basis is our computer or phone.

The absence of dialogue and community

As a sociologist, Bauman deals with new technological dependencies. For him they are devastating, practically irresistible forces. They have an impressive power of “community”. Never before in history had there been anything like it. And yet Zygmunt Bauman also thinks that never has so much communication been made without any real dialogue or fruit.

Zygmunt Bauman says that on Facebook and the like, what people do is “echo”. They only listen to what they want to hear. For him, social media is like an immense house of mirrors, where we encounter people but don’t dialogue.

Making and eliminating contacts on social media is far too easy. In real life, it is not so easy. In real life we have to face up to what we do. On the internet, we don’t. There is an exchange of messages, but no dialogue. There are differences of opinion, but no real constructive debate. It creates the illusion of being connected with others when we aren’t really.

The realm of “public me”

Social media invites us to publicize ourselves, to show who we are. Of course, we choose only the most presentable parts to show others. We form small communities that we manage at our whim. We are little dictators in the empire of our account, and we are the ones who decide who should be there and who shouldn’t. It doesn’t really affect us if we “unfriend” anyone.

Our ego comes first on social media. Unwittingly, we become dependent on how we appear on Facebook. We want to be identified and recognized a certain way, and we get frustrated if this doesn’t happen.

Zygmunt Bauman sees social media as a trap. He thinks that it has a decisive influence on what he calls the “liquid culture”. In it, precarious human relationships prevail. Love without a face and without any commitment. Waves of feelings and ideas that are here today and gone tomorrow. It entertains people, but at the same time it’s increasingly controlling us. We just aren’t aware of the political and economic powers that have us in their grip.

For Zygmunt Bauman, the outlook is not encouraging. Despite so much information flying around, we are becoming more uninformed. We never know what to believe. Our communication is reduced to monologues rather than real communication. There is so much globalization that individualism has become increasingly aggressive. All that this “freedom” has done is to make us more compliant to those who want to decide how we live our lives.

Are We as Happy as We Seem on Social Networks?
We've all been surprised at the lengths people will go to on social networks, these new means of communication. Read more »
Link copied!
Interesting Articles
Psychology
Working Memory - The Warehouse That Never Stops

Maybe it's due to maturity, age, or even resignation, but at some point, everyone realizes that some arguments aren't worth it. At that…