If you’re looking for an inspirational moral story, you’ve come to the right place. Read on. This intriguing Zen story about a king and two falcons will truly amaze you. 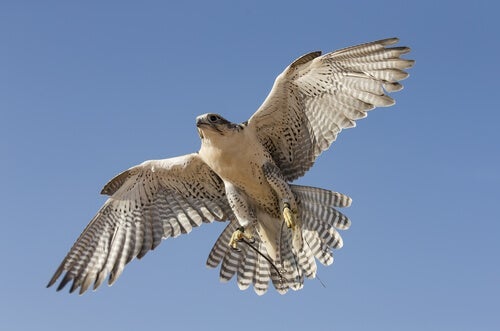 This inspirational Zen story about autonomy tells us that, in a distant kingdom, there was a sovereign very dear to his people. He ruled fairly and that’s why everyone trusted him and obeyed his orders without questioning them too much. Many brought him meaningful gifts as a sign of admiration and affection.

Once, a man gave the king a very special gift. They were two beautiful falcon chicks, the young of an extraordinary specimen. The sovereign thanked such a wonderful gift and immediately called the falconry master to take charge of the training of the animals. There was no one in the kingdom who knew more about falcons than he did.

The master welcomed the chicks and gave them special treatment from the very beginning. He obtained the best food for them and personally took care of them. The days began to pass and both falcons began to grow. However, despite being brothers, they were very different.

“Why is self-control, autonomy, such a threat to authority? Because the person who controls himself, who is his own master, has no need for an authority to be his master. ”

The two chicks and their differences

Right from the start, the falconry master noticed that one of the chicks was weaker and timider. That’s why he reserved the best food for him. Sometimes, he even forgot to feed the other, or only gave him small portions. He became obsessed with not allowing either of them to die and felt that one of them needed him more.

As it grew, the forgotten chick began to make its first walks, away from the small cage that remained open. He looked for more food and, thus, little by little, became familiar with the place. He discovered different plants, grains, and worms that he found exquisite. This way, he compensated for the lack of care.

This intriguing Zen story shows how these chicks differed, even if they were born from the same magnificent falcon. The most protected had acquired the habit of waiting for food and care, while the other was very independent. Yet, the biggest difference between the two was that, while one was always still, the other learned to fly.

The falconry master accepted that he was unable to find a solution to the problem. Try as he might, he couldn’t get the protected falcon to take flight. The best he managed was to get him out of the cage and put him on a strong tree branch. It stayed there all day, but it gave no sign that it wanted to fly.

Seeing this, the teacher decided to tell the sovereign what had happened. When the sovereign learned of this enormous difference between the two chicks, he decided to issue an edict. The Zen story follows with the king offering a juicy reward for those who were able to teach the falcon who resisted to fly.

All sorts of experts then arrived in that kingdom. They even came from distant countries, motivated by the desire to win the goodwill of the king and, incidentally, the large reward. Each of them thought they had come up with a strategy that would allow them to achieve the goal.

Many months passed and no one managed to get the bird to fly. They tried to captivate him with delicious delicacies, but the animal didn’t move from its branch. They also tried taking other falcons that showed him different flight techniques, but nothing happened.

Even one of the adventurers wanted to perform a magical ceremony and apply his spells to the animal, but he also didn’t manage to get it to move away from the branch on which it remained all day. One lovely morning, a humble peasant arrived at the castle. For most, it went unnoticed.

The elderly man simply sat by the tree and looked closely at the falcon. It was like that all day until the sun’s rays fell. The next day, the peasant appeared before the king and asked him to look out the window. The sovereign hardly left his astonishment when he saw the falcon soaring through the sky.

He called the master of falconry to make sure it was the same shy animal that didn’t move from the branch until yesterday. The master certified it. Seeing what happened, the King asked the man how he did it. The peasant, with great simplicity, replied: “It was easy, your Highness. I just cut the branch”.

This though-provoking Zen story on autonomy teaches us that we must live up to our potential to succeed. Often, we settle, without knowing our potential, without developing our qualities, as we’re comfortable in our branch. Perhaps it’s necessary for someone to cut it for us to take flight. These unexpected situations are opportunities.

7 Essential Keys to Help You Be More Like a Zen Monk
Zen monks devoted their lives to being present in all they do, to being dedicated, and to serving others. Read on to learn more! Read more »