You Are a "Bad Mother" Because You Are a Real Mother 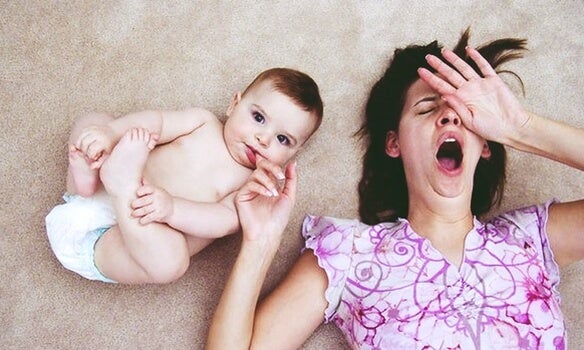 Many mothers are under brutal pressure: they have so many responsibilities and they must do each one perfectly. Among these responsibilities is that which defines them as mothers: raising children.

Unfortunately, many mothers are judged to be “bad mothers” for a variety of reasons. For example, being too hard on their children or, on the other hand, spoiling them too much. But hear this: mothers who are accused of these things are not always bad, they are just real.

Being a mother is not easy. Despite the amount of information we have, which is at times contradictory, errors are possible. Moreover, mistakes are not only possible, but will happen over and over, as in anything else.

Mothers make mistakes because it is impossible to be perfect.

A phenomenon called “mom shaming” has unfortunately gotten big in recent years. It critiques the real mother, the mother who makes mistakes. This phenomenon has gone viral on social media, where it’s easy to criticize others.

For example, we have the case of Chontel Duncan, a personal trainer who set off great controversy on her Instagram account. She had uploaded pictures of herself exercising while pregnant. Many people judged that having a toned belly and visible abs could endanger the baby.

Similarly, the singer Soraya received a barrage of criticism for having gone out to dinner with her partner seven days after giving birth, leaving another person in charge of the baby. After the photo was published online, critics jumped on it: “As a mom, I certainly wouldn’t think of going anywhere without my baby.” Or: “If you want to continue doing whatever you want with your life, do not have children.”

This type of criticism is a reflection of the need some mothers have to be perfect or impose their idea of perfection onto others. They condemn practices that, from their point of view, are questionable. In addition, these criticisms also make us reflect on the model of mother that society promotes.

We all harbor certain beliefs about what it means to be a mother, or what it should mean. But, isn’t adapting to the desires of the majority just to stop their criticism also being a bad mother?

All this things serve to embarrass and humiliate women; it makes them feel insecure about their role as mothers. Most mothers want their child to be healthy and desire to raise them as well as they possibly can. When faced with this intention and such a complex situation, it’s natural to feel some doubt.

In this context, the criticisms we refer to here act like a slap in the face, forcing you to comply with very rigid rules. Because there is no such thing as a perfect mother. The next best thing is being a real mother who strives to do the best she can.

“There is no way to be a perfect mother, and a million ways to be a good one.”

Why am I a bad mother?

The above situations are just an example of what society labels “bad”. However, there are certain beliefs that may or may not be true but have become widespread. They are sources of confusion and censure against mothers who do not follow or support them. Let’s look at some of them:

After each of the above statements, which many readers will sadly identify with, what follows is that a real mother must be a “bad mother”. A real mother can’t be perfect. A real mother makes mistakes, gets things wrong, and sometimes loses their patience.

Mothers are not beings that come from another planet, even if sometimes it seems that way. They are ordinary people, who lead normal and ordinary lives. Some have to work to be able to live. They need time to rest just like other people. The high expectations that society has for mothers feels like an unbearable burden.

If you have ever had to listen to this type of criticism, don’t worry. You are human. Many of the people who criticize you also lose patience or do not have time for their children. They vent their frustration at you because you reflect their own inability to be the perfect mother. Really, there is only one role you need to play: the real mother.

“It doesn’t matter that you sometimes make mistakes when raising your children. The important thing is how you accompany them after recognizing that you made a mistake.”

The Emotions that Come with Being a New Mother
Being a new mother brings a whole torrent of emotions along with it. The first time you see your baby's face, you feel happy, scared, nostalgic... You're Read more »
Link copied!
Interesting Articles
Wellness
9 Short Films to Help Us Understand Our Feelings

This is for those people who really struggle with understanding that feelings need to be experienced, understood, handled and, above all, expressed.…