Yelling as a Means of Expression

Yelling at others but asking them not to yell back at you is incredibly contradictory. Screaming can be very disturbing for some, so why do people turn to it while expressing themselves? Let's find out. 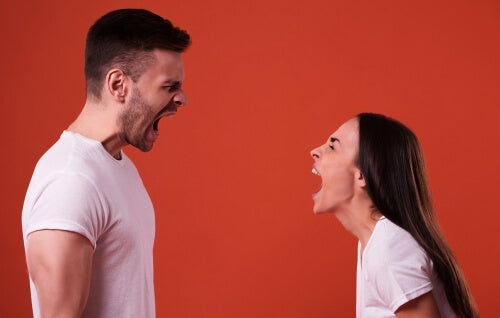 Nobody likes to be yelled at. For that reason, you have all the right in the world to be treated right. However, in order to ask this from others, you must treat them right as well, which means not yelling at them. Otherwise, there’s no point in making such a demand. In everyday life, it isn’t uncommon to encounter people who, in the middle of an argument, use yelling as a means of expression. By doing this, they escalate the volume of the conversation and feel more in control.

Throughout the years, you’ve probably encountered individuals who don’t seem to have control over themselves. Undoubtedly, dealing with an irascible person is difficult, especially when they’re your boss, a co-worker, or your partner. The biggest challenge in a case like this is not letting their temper intimidate you.

Yelling is very difficult to deal with because it’s very offensive and controlling. If you frequently have to face people who use yelling as a means of expression, you must learn how to react to this type of aggression. In the same way, if you decide to do the same to them, you’ll lose all authority you once had to demand that they treat you more respectfully.

Yelling as a means of expression

Let’s be real here: the only purpose of yelling is intimidating others and expressing anger. Anger is the main driver of this action. People who use yelling as a means of expression just want to feel they’re in control of the situation or the other person. If only they realized that expressing anger in this way shows just how little control they really have.

People use many clichés to justify yelling. “I’m yelling because, if I didn’t, you wouldn’t listen to me”. This is very common. “This is the only way you’d understand what I’m saying,” others say. Just like these, there are many other stereotyped phrases that claim to provide reasoning for the irrational act of yelling.

When someone decides to scream instead of talk normally, it’s easy to see how unstable their emotions are. They yell because they want to seem stronger. As we mentioned above, they just want to dominate the situation. However, it’s important to understand that an individual’s unable to control an external situation if they’re not in control of themselves in the first place.

Why do people decide to yell?

People also yell when they feel scared or cornered. In this case, they use yelling as a means of expression to defend themselves. Now, the threat can be real or imaginary. However, many times, it’s only in their heads and manifests as a product of their own insecurities. For example, those who are very dependent on other people’s approval or very sensitive to criticism may interpret every interaction as aggression they must respond to.

Another reason people yell is simply that they’ve turned it into a habit. Let’s not forget that we’re all a product of our education. If an individual’s family educated them by yelling, odds are they’re going to yell at others when they’re an adult. To them, that’s the norm. As a result, when faced with any disappointment or frustration, that person will probably end up screaming to express their discomfort.

On the other hand, some people develop aggressive tendencies, either because of a badly channeled temperament or because they frequently go through overwhelming situations. In such cases, not only do they use yelling as a means of expression but they’ll also regularly show hostility and outbursts of anger.

Demanding not being yelled at

Often, those who raise their voices receive exactly the same in return. In that case, you can see just how detrimental screaming can be. Not only is it useless but it’s also extremely harmful to communication and human relationships. Asking not to be yelled at is a right that you conquer and defend. However, you need to practice what you preach in order to do so.

In human relationships, it’s easy to observe the pattern where the “superior” person has the right to shout and the other needs to keep quiet. You can see this between parents and children, teachers and students, bosses and employees, and even in couples who build asymmetric power schemes.

In these scenarios, power is vertical and severe. A mother yells at her children but thinks it’s disrespectful if they do the same to her. In a case like this, there’s some sort of hierarchy that everyone must respect. This is true. However, parents often forget that authority must be coherent. After all, they’re their children’s role models.

Basically, parents, teachers, bosses, or even spouses can get away with using yelling as a means of expression. As a result, they end up intimidating the other person (and disrespecting them). In the end, who’s going to respect someone who doesn’t keep their word and doesn’t keep their emotions under control? Screaming is pointless and, although we all fall feel tempted to raise our voices at some point, it’s still wrong.

The Emotional Pendulum: From Being Silent to Screaming
An emotional pendulum arises when a person decides to bottle up their grievances or keep quiet any issues they have with someone. Find out more! Read more »

To a certain extent, hating the person you love is quite normal. Many people think that the opposite of love…

A couple is a reality that is constantly being constructed and reconstructed (evolution). The fact that two people are in…

Sex
Learn All about Postcoital Dysphoria

People who suffer from postcoital dysphoria (often called "post-sex blues") feel incredibly sad after having sex. Their sadness might last…

Human Relationships
The Influence of Other People's Expectations

Conflicts
How to Handle Conflicts with Humor

Managing conflicts by taking things with humor not only allows for resolving disagreements, but also strengthens relationships. In fact, different studies…