The Body Language of Controlling People

Controlling people tend to use very specific body language associated with impatience and anxiety. They often communicate their tension through unconscious gestures and movements. 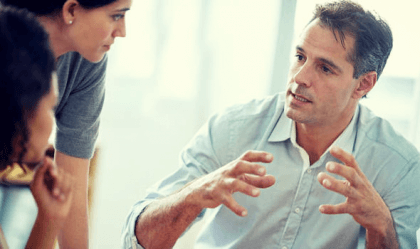 Although the body language of controlling people is often obvious, it can also go unnoticed. Controlling or not, however, people spend most of their time communicating with others, and we’re often unaware of the messages we’re sending.

The primary means of human communication is our bodies. Because, as we mentioned above, we aren’t usually aware of our body language, which tends to send more authentic messages about our real thoughts and feelings.

Every gesture and every pose can say something about what’s on your mind. Consequently, you can learn a lot more about a person by studying their body language than by listening to the words they say. In the case of controlling people, their desire to dominate manifests itself in behaviors associated with anxiety. That’s especially true when they’re in situations where they feel out of control.

What kind of gestures, facial expressions, and poses are characteristic of controlling people? You have to look at their faces, what they do with their hands, how they sit or stand, and even their breathing. Below, we share some of the most common body language of controlling people.

Several aspects of facial expressions characterize controlling people. When someone’s spontaneous and sincere, they tend to gesticulate while their talking. Their muscles are relaxed and their look, smile, and facial expressions, in general, accompany their words.

When someone is controlling, however, their face stays stiff. There’s usually something impersonal in the way they gesticulate, if they do it at all. In general, it’s quite clear that the person’s goal is to keep communication under control. Whether or not they succeed is a separate issue.

People with dominating personalities also tend to stare. They fix their gaze on someone and don’t even blink sometimes. It’s a way of intimidating the person they’re talking to. That kind of look is a way to exercise power, and also of challenging the other person. They might also turn their mouths down or raise their chin in an arrogant way.

Asymmetry in their posture

Another distinctive kind of body language of controlling people is their posture. They pay attention to where they are in a room and they use gestures that project superiority to everyone else. These kinds of people often lift their shoulders and puff out their chests because they want to seem more important to others.

Another common behavior is to try and be slightly higher up than the person they’re talking to. For example, they’ll stand up while talking to someone who’s sitting down. Looking down on someone from above gives them a sense of greater power.

The best example is a police interrogation. You’ve seen it on TV and in the movies. Usually, the police officers are standing, and the person they’re interrogating is sitting. The police can walk and move around, but the other has limited movement. All of those elements help them maintain a sense of control.

Arms, hands, and other details

People who are trying to control the room tend to make rapid and imprecise movements with their hands. Another typical behavior is that they talk with their hands to emphasize what they’re saying. The goal is also to display how energetic and forceful they are.

Another common gesture of controlling people is pointing with their index finger. This is an instantly recognizable gesture for most of us, and it means that you’re being warned or accused of something. When you point at someone, the other person usually gets defensive. This gesture gives control to the person who is doing it and takes it away from the other person.

Dominating people tend to use their arms to increase the amount of space they take up. They put their hands on their hips as if they’re scolding someone, or cross their arms. If they’re standing and the other person is sitting, another common gesture is to make your hands into fists and lean on the table.

All of these gestures and body language controlling people use can also be used to your advantage. According to experts on the subject, using these kinds of gestures and postures can help you feel in control when someone’s trying to intimidate you or make you feel vulnerable.

The word "dyad" in the theory of dyadic formation refers to groups of two people, such as relationships between partners,…

Intimacy in relationships, be it a romantic relationship or a friendship, largely defines who you really are and what you…