Yacouba Sawadogo, the Man Who Beat the Sahara

Some people's amazing actions remind us the story of David and Goliath. One of those is Yacouba Sawadogo, a man who faced off against the Sahara Desert and won, thanks to his perseverance and trust in ancient wisdom. 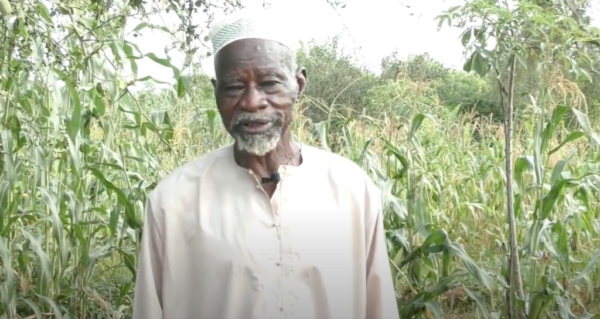 Yacouba Sawadogo didn’t need a university degree or the news to tell him the climate was changing. He lives in Burkina Faso, a country that borders the Sahara Desert, and he saw that it was raining less and less every year. He also noticed that the lack of rain was affecting the crops.

This brilliant man lives in an area called Sahel. This is the region located between the Sahara and the Sudanese savannah, an area with an unstable climate that sometimes triggers dramatic famines. One particular famine occurred between 1968 and 1974, at the end of which Yacouba Sawadogo started his movement.

The global community didn’t recognize Sawadogo until much later when, in 2018, he won the Right Livelihood Award (sometimes called the “Alternative Nobel Prize”) for his fight to improve humanity. Then, the quiet and wonderful work he did for his people and the Earth finally came to light.

Yacouba Sawadogo and the Sahara

Everyone knows about the Sahara desert. It’s been the stuff of legends for thousands of years. What many people don’t know, however, is that residents on the northern and southern edges of the desert have managed to find a way to live there and start communities that are constantly struggling with the desert’s strength.

In the 20th century, the population in Africa increased and a wave of foreign businesses (mostly mining and extraction companies) arrived on African shores and subsequently altered the natural cycles of the eco-system. This had the biggest immediate impact on the countries in the Sahel zone, including Burkina Faso, where Yacouba Sawadogo is from.

In the late 60s, the desert started to gain ground in Burkina Faso. The sand was encroaching on fertile land and hunger became a common problem. Most people who lived there decided to flee because they believed it was a lost cause. However, Sawadogo had a different strategy. He decided to stay and fight against the desert.

When desertification is threatening an area, the solution is usually an exhaustive study with a specialized diagnosis, followed by the application of sophisticated, large-scale strategies to reverse the process. In Burkina Faso, however, they didn’t have specialists, high-profile studies, or millions of dollars to invest in the project.

Fortunately for his community (and the planet), Yacouba Sawadogo didn’t let that stop him from trying. He and a friend, Mathiew Ouédraogo, started to do their own research. They decided to look to the wisdom of their ancestors for solutions to their modern crisis. In that region, people had been cultivating crops for many years. Consequently, traditional knowledge was rich with methods to fight desertification.

The two dreamers decided to apply two ancient techniques to restore the soil. The first is called cordons pierreux, which involves making lines of fist-sized stones in the fields that help capture rainwater and keep it there long enough so that it has time to sink into the ground.

The second method was another traditional agricultural technique called Zaï holes. It involves digging holes next to planted seeds to provide moisture for the plants. Sawadogo came up with several innovations to the traditional technique, one of which was digging bigger holes.

He also had the idea to fill the holes with organic matter such as manure, leaves, small sticks, and vegetable scraps. He may not have realized it at the time, but this decision was probably what ultimately made the project successful.

One unexpected consequence of putting organic matter into the holes was that it attracted termites. The tunnels the termites dug in the fields actually helped to further break up the soil and make it more amenable to plant life. In other words, the termites were responsible for the missing piece of the puzzle. Thanks to the termites, the soil softened and retained more moisture. Thus, the plants began to grow.

Victory over the desert

More than 40 years would pass before the world knew about Sawadogo’s incredible fight to restore life to the desert. Today, he’s recovered more than three million hectares of land, turning previously sterile land into fertile soil.

In spite of his amazing achievements, Sawadogo wasn’t satisfied. When he realized that the traditional methods were working, he started teaching them to anyone who wanted to learn. He’s spent years traveling from village to village on his motorcycle. Wherever he goes, he teaches his vitally important strategies to the communities there.

Yacouba Sawadogo’s legacy in his community is invaluable. We can learn many important lessons from his story. He teaches us to never give up, no matter how difficult things seem. He’s also a perfect example that one-size-fits-all solutions aren’t usually the best, and that common sense and confidence can take you very far.