Eco-Anxiety, a Consequence of Climate Change

Are you worried about climate change? Does receiving information about it cause you a lot of stress? You may be suffering from eco-anxiety. Continue reading to find out more about it. 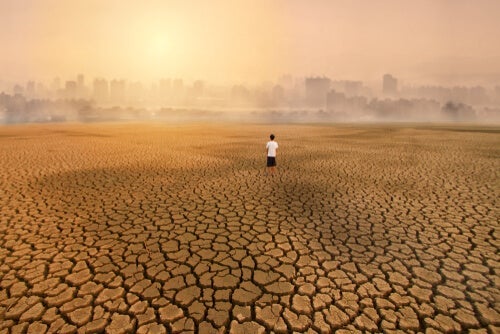 The climate crisis is real: the poles are melting and millions of species are threatened as humans continuously change and destroy the world’s ecosystems. Thus, eco-anxiety is sort of normal for those who actually care about it.

Furthermore, there are conflicts over the control of certain resources and concern about their scarcity. Worrying about this affects people in different ways, but it can be quite deep for some and greatly affect their lives. These people probably suffer from eco-anxiety.

This concept, also known as climate anxiety, arises from the need to name the chronic fear of environmental destruction. Concern about climate change and its consequences on nature is definitely another source of stress people can add to their daily worries.

Two possible reasons why you may suffer from eco-anxiety

Eco-anxiety happens for two reasons. On one hand, because someone had to leave their place of origin. On the other one, it might be a consequence of having such a developed environmental awareness that it leads to psychological discomfort.

According to a report published by the European Union, about 26 million people are affected by meteorological disasters: floods, rains, fires, or powerful storms every year.

Thus, residents of certain areas are forced to emigrate due to said events. For example, one in ten people who live on islands like Tuvalu or Kiribati ends up as a climate refugee.

Due to these environmental changes, natural and human-made, a large part of biodiversity extinguishes and certain places run out of resources.

Therefore, it’s becoming increasingly difficult, and even impossible, to reside in such areas. So much so that the United Nations estimates that about 1,500 million people will have to relocate in order to survive.

In addition to the changes that people undergo when they have to change their place of residence, those who forcibly emigrate also suffer from seeing their land and environment destroyed. This can lead to enormous concern and frustration.

Eco-anxiety is mainly due to high environmental awareness

People attached to and conscious of nature become emotionally distressed. This often comes along with a feeling of frustration due to the limited power of their individual actions. Thus, some people really suffer from the effects that humans are causing on the planet.

An example of this is the effect this has on young people. An Oxford clinical psychologist determined that many preteens are eco-anxious.

This is because children are more likely to understand and be aware that human beings are responsible for these climate changes. Therefore, they end up experiencing emotions such as resentment towards adults, as they could’ve lessened the impact, frustration, fear, and grief.

Similarly, it’s striking how environmental scientists are also widely affected. In this respect, Joe Duggan launched a survey for scientists in 2014. The goal was to have them answer how climate change made them feel.

The results determined more of the same. Many of them felt hopeless, afraid, despaired, and worried. In fact, British scientists recently published a letter in the journal Science. In it, they requested psychological help to better deal with the negative results of their studies.

Some consequences of eco-anxiety

There are many consequences of climate change besides eco-anxiety. Focusing on the psychological aspects, these variations can lead to physiological changes that, in turn, affect people’s well-being. Humans’ most basic physiological processes – like sleeping or eating – are heavily influenced by nature.

Sunlight and temperature affect circadian rhythms and regulate neurotransmitters that affect your health and mood, for example. Therefore, radical changes in the environment compromise your body balance at all levels.

Also, natural catastrophes and high temperatures are closely related to psychological disorders such as anxiety and mood disorders. For example, the rise in global temperatures is already having repercussions on mental health.

Furthermore, research published by Nature reveals that this rise plays a big role in suicide rates. Another study revealed that pessimism increases when temperatures skyrocket.

It’s in your power to carry out these three simple actions in order to reduce the problem and your discomfort:

Experts recommend promoting resilience mechanisms when faced with this situation. (It won’t change unless you take immediate action.) In other words, you must understand the problem as a multidimensional element.

Thus, the best measure to reduce eco-anxiety is to be well-informed and empowered. Every person must have an opportunity to be a part of the solution.

How Can I Contribute to Bettering the Environment In My Community?
Bettering the environment is a common goal. It's time you ask yourself: Can I carry out small actions to help this cause? Read more »
Link copied!
Interesting Articles
Clinical Psychology
Eight Interesting Facts about Anxiety