The inspiration for many of William Blake's works came from his own visions, images full of symbolism. In fact. they also reflected in nearly prophetic works such as The Book of Urizen or The Book of Ahania. 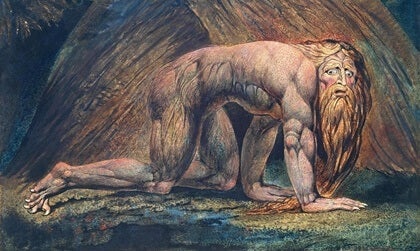 William Blake was a prolific artist who produced many paintings, prints, and poetry. Yet, he lived in darkness and died without a penny. The vision of his art was rather spiritual, fantastic, and idealistic, and basically ignored during his life. He sort of set the foundations of the approaching romanticism with his brushstrokes and verses.

Blake was a rather unique artist, he had a deep connection to what he considered sacred and the peculiar biblical mysticism that inspired him. However, he was also a disturbing man who was often taken for a fool due to the visions he claimed to have had. They began when he was four years old.

He said that he received visits from winged and demonic entities throughout his life. Such presences guided him to sketch many of his engravings and write many of his books. Works such as The Book of Urizen, The Book of Ahania, The Song of Los, Vala, or The Four Zoas all contain a prophetic style that wasn’t common at the time. Thus, people thought him insane.

Whether his work was the result of madness, disease, or mere creative force, William Blake, today, is a reference in the art world. His misunderstood mind used creativity as a way to try to achieve his divinity and transcend beyond that material world that trapped him.

He implanted his particular aesthetic on his painting and letters. There, he left a testimony of emotions such as loneliness, along with his overwhelming visionary ideals.

The early years of a young engraver with prophetic visions

William Blake was born in London in 1757. He belonged to a middle-class family and was homeschooled along with his seven brothers. Everything there revolved around two very specific dimensions: the Bible and art. Historians believe that his parents belonged to a radical religious sect rooted in the English Dissenters. A fact that could’ve molded the mystical and spiritual vision that inspired him so much in his artistic maturity.

Despite not attending any school, William Blake always liked to draw. He copied works by Rafael, Michelangelo, Marten Heemskerk, and Albrecht Durer. Also, he was able to explore the poetic genre with the help of his mother and read the works of Ben Jonson and Edmund Spenser.

He was a young man with great artistic determination, an impulse so strong he became an engraver’s apprentice in 1772. The training lasted seven years and he became an artist of the Society of Antiquaries and the Royal Society. At the age of 21, he began working for various publishers. He had to copy the engravings from the tombs of kings and queens at Westminster Abbey.

Later, he completed his training as a painter after admission to the Design Schools of the Royal Academy of Art. Already in this first stage of his life, many of his works started directly from the visions he experienced during his childhood. It was common for monks, angels, and also demons to appear around him, according to Blake.

In 1782, William Blake married Catherine Boucher. She was a woman of humble origin whom he taught to read and write. Also, he got her started in the art world and trained her as an engraver. Thus, she became his life and work companion.

At the time, William and his brother Robert had saved enough money to open a printing press. It allowed them to support many of the dissident intellectuals of the time. Revolutionary philosophers, writers, and scientists, such as Joseph Priestley, Richard Price, Henry Fuselli, and Mary Wollstonecraft, were among them. The latter was one of the earliest feminists and mother of Mary Shelley, author of Frankenstein.

William Blake was able to publish his own works, such as The Poems Of William Blake: Comprising Songs Of Innocence and of Experience and Visions of the Daughters of Albion. In the latter, he defended concepts such as the right women had to achieve personal fulfillment. Likewise, he began to innovate in his engraving technique during this same time. After one of his visions, he began using the etching technique to illustrate the poem’s books, thus shaping what he referred to as an illuminated print.

Two significant revolutions in the world took place between 1775 and 1789: the American and the French. All of these social movements were also a source of inspiration for William Blake. He always advocated freedom extolled by individualism, very much in line with Nietzsche’s philosophy.

The misunderstood and criticized art of William Blake

In 1804, William Blake began his most ambitious work: Jerusalem, the Emanation of the Giant Albion, a book he both wrote and illustrated. It happened around the same time when he began to expose many of his works, such as Chaucer’s Canterbury Pilgrims and Satan Calling Up His Legions. However, all his works, both literary and artistic, only received ridicule, indifference, or criticism. The kind that labeled him as “lunatic” or “madman”.

Blake became isolated at the beginning of 1809 by his own choice. The disenchantment and awareness that nobody would ever recognize his work made him increasingly separate from his engravings, brushes, and verses. Progressively, he sank into darkness and absolute poverty. He died at the age of 65 and is buried in Bunhill Fields Cemetery, in London, England.

The legacy of an artist who chose to look inwards

William Blake wasn’t a landscape painter as most of the British artists of his time. He avoided direct observation because his inspiration came from within his own convulsed universe inhabited by prophetic visions. He didn’t pay much attention to sunrises, curly trees, oceans, or abbeys.

The darkness of the inaccessible is present in Blake’s poetic legacy and engravings. There’s that mystical force that’s frightening at times. It disturbs and seems to reveal an indecipherable message. His work is something blasphemous for many critics. Others guessed that his verses and drawings would make him a key figure of romanticism.

5 Ways to Access Visionary Experiences According to Aldous Huxley
Aldous Huxley spent a great deal of his life tapping into visionary experiences and how to attain them. We'll talk about these experiences in this article! Read more »
Link copied!
Interesting Articles
Biographies
Antoine de Saint-Exupéry, Biography of a Noble Soul

Biographies
The Life of Ryszard Kapuściński, a Famous Journalist