Why Do We Dream About Our Exes? 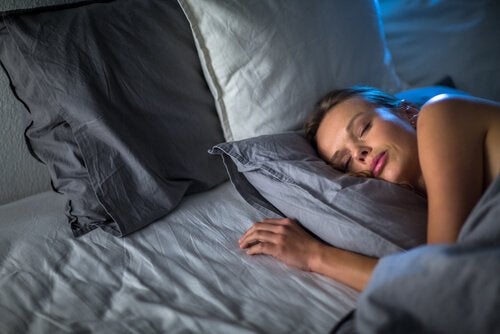 Why do we dream about our exes? Do you think love still fills your heart, and you still feel something for that person? That may be the case, but don’t worry, because there are many other possible reasons as well.

Calderon de la Barca said, ages ago, that “life is a dream, and dreams, that’s all they are.” Life and dreams, so intertwined with one another and so inseparable that one simply cannot survive without the other. So, in this interplay between past and present, your ex-partner may play an important role.

Sometimes we think that having a dream about an ex means that we haven’t really moved on from the breakup. However, that doesn’t have to be the only explanation. In fact, there are many other reasons why this situation could take place. Thus, there’s no need for you to suffer over this circumstance.

In general, dreams represent aspects of our lives which remain in our subconscious. Ones which we’re not capable of resolving throughout our awake hours. But, this doesn’t mean that you haven’t resolved or overcome a past relationship with your ex.

In fact, even though dreams are representations of our subconscious, we would be mistaken to withdraw a literal or direct interpretation of them. They are symbolic. Hence, they’re not simply a loyal mirror of our inner reality.

“Dreaming, in theory, is living a little. But to live in a dream is the same as not existing.”
-Jean Paul Sartre-

Interpreting the dreams you have about your exes

Now that we have delved into the topic, the psychologist Marc Rodrigues considers that the act of kissing an ex in a dream doesn’t imply love or feelings towards that person.

However, it can be a representation of the need to feel love or be loved. Why? Because that person is a reference point, due to what they meant to you in your life. And that’s why their image can be evoked during a dream, as a past experience. Because logically, you cannot have as a reference or evoke in a dream something you have not actually experienced.

In this sense, keep in mind that you shouldn’t worry about this type of dream if these didn’t include people who were important to you ages ago. Nevertheless, it can be a warning sign that something is wrong. For example, it might be an indicator that we have a relationship with another person and that said person doesn’t meet our standards or expectations.

In the case of bachelors, for example, dreaming about a past relationship could also represent dissatisfaction. Thus, these are dreams that tend to be associated to positive feelings of love. Yet, they include a undertone of melancholy.

Think, it’s possible that our subconscious will show us, with each one of these representations, that we are suffering from certain affective deficiencies. In this sense, the psychologist Marc Rodrigues recommends that each individual maintain a high self-esteem and surround themselves with people who love and care about them.

One detail that might seem obvious to you, this type of dream, if they are especially repetitive, require us to take action. Be it due to affective deficiencies, current issues, or because there are tensions to resolve with that ex.

Maybe the relationship ended and the resolution wasn’t very appropriate. In fact, these dreams can present themselves as mild nightmares. In these cases, it could means that there are still some topics left to talk about and some wounds that need closing in order to bury your old ghosts.

Another variable that tends to contribute to the existence of this type of dreams is one’s insecurity. It’s normal when you’re starting a new relationship that we feel previous sensations and for us to even compare it with past relationships. Hence, memories can arise in the form of dreams.

In these cases, the dreams tend to be sad. In fact, this denotes insecurity, transmitted by the subconscious during our resting hours. Actually, it could even be interpreted as a subconscious warning sign. one given to avoid committing the same mistakes from the past.

“It’s worth more to dream one’s life away instead of living it. Although, living it also means you have dreamed it.”
-Marcel Proust-

As you can see, dreaming of an ex doesn’t necessarily indicate that we still feel something for that person. Our subconscious uses known faces to express inner sensations. Thus, it doesn’t mean that hot embers remain where there was once a great burning passion. These dreams are simply reflections of the past that can teach you to reflect over your present in order to do it better this or next time.

On the other hand, it’s also not negative if it happens once or various times. Specially if we’re capable of understanding the situation that the dream is trying to reflect. In any case, never forget that your dreams are symbolic representations. They have more to do with what is going on in your life than with the “protagonists” that appear in them.

How to Let Go of Your Ex, According to Walter Riso
In fact, sometimes some people get so obsessed, they might spend months or even years worried about what their ex might do or not do. Read more »
Link copied!
Interesting Articles
Psychology
It Is Useless to Worry About Security

Human beings are continuously looking for security. They want to find it in the workplace, in their relationship, within their…

Fibromyalgia was recognized as a disease by the World Health Organization (WHO) in 1992. Today, fibromyalgia affects 4% of the…

Psychology
Why Isn't Every Woman a Feminist?

Feminism can make both men and women uncomfortable. We weren't exactly raised in a feminist culture; in fact, it was quite the opposite.…