Why Can't You Stop Procrastinating?

Laziness or a lack of responsibility aren't always behind the act of procrastination. In fact, there's a series of very specific psychological dimensions in those days where you can't stop putting off your obligations. 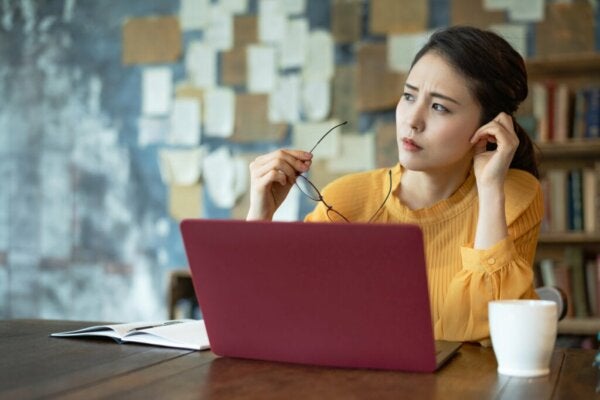 “I should start working. Tomorrow I have to hand in that report and I haven’t even opened my computer.” “I have two days left to resolve an issue that I’ve been dragging on for weeks but I still can’t get myself to do it.” Why can’t you stop procrastinating? Are you destined to be lazy? Why is your mind unable to focus on real priorities?

We dare to say that every single person has fallen into a procrastination cycle which, as a result, has led them to feel guilty. After all, postponing responsibilities is a sign of laziness, isn’t it? Well, it’s what many people believe but doing so only makes things worse. In fact, few things further intensify the act of procrastinating like a negative and disqualifying inner dialogue.

Think about it for a second. Those individuals who are actually lazy, idle, and carefree don’t care about being that way. All they care about is finding excuses not avoid caring about what they should. In contrast, when you procrastinate, you do end up feeling bad about it.

Therefore, it’s essential to understand what’s behind this behavior in order not to let it condition your life. Let’s expand on this.

Why can’t you stop procrastinating?

We tend to associate procrastination with young students. However, individuals of any age do it. For example, having to cook a difficult dish or fix something in the garage. We also experience it when it comes to work, such as having to complete an invoice or a detailed project. Although we know it’s something we have to do, we can’t seem to get ourselves to get to work.

Thus, when you feel like you can’t stop procrastinating, what you experience is actually stagnation and a lack of progress. Evidently, this feeling makes you feel anxious. Moreover, two different things happen when you go through this. Let’s see.

What’s the reasoning behind this behavior?

It’s not a time management problem, it’s your emotions

When you ask yourself “Why can’t I stop procrastinating?”, it’s pretty common to think that the problem is poor time management. For that reason, a lot of people buy books that can teach them to better manage their time and even get a planner. However, for the most part, procrastination stays the same.

Telling someone that’s been procrastinating for months to be more organized is like telling a depressed person to look happier. It simply doesn’t make any sense because, in reality, the basic problem lies in the person’s emotions; their anxiety, their worry, their fear, their need to do well, and their fear of failure.

These emotions are difficult to deal with. As a result, the individual gets upset, uncomfortable, and uses procrastination as a complex and exhausting exit route. The worst of all is that these situations drag on for months and, in these cases, the person may be facing an undiagnosed depression or anxiety disorder.

There’s a lot of fear behind the question “Why can’t I stop procrastinating?” This may seem contradictory to you, right? What does this mean? What are you afraid of?

A study conducted at Leuphana University in Germany showed that procrastination is basically a dysfunctional response to unwanted affective states. For instance, there probably are many things you have to do that make you feel scared and uneasy. By not knowing how to handle these emotional states, you decide to avoid them. That’s when procrastination comes into play.

On average, fear is behind procrastination:

If you have a goal, focus on your emotions before the goal itself

Think about these scenarios. Setting a short-term goal for yourself, having to carry out a task, or delivering something on a specific deadline. When it comes to events like those, people usually make a small mistake. They focus on the due date and then they plan. This isn’t exactly bad. However, planning should be secondary. The main thing should be to focus on emotions.

If a task makes you anxious, you won’t move forward. It’s necessary to work on your emotional state first and then move on to thinking of your goal. If you aren’t excited about doing something, you won’t find the strength and motivation to invest time in it. You must manage those feelings, reframe your thoughts, reduce your fears, and manage to keep yourself in a relaxed and focused state of mind in order to be productive.

Furthermore, doctors Sirois and Pychyl (2013) from the University of Leeds invite us to take the following into account. Before setting our sights on this long-term goal, we must urgently set ourselves a short-term goal: take care of our state of mind.

In brief, if you’re feeling mentally okay, you’ll be able to do whatever you set your mind to. Emotional management will always be the best wellness strategy. Keep that in mind at all times!

Hidden Causes of Laziness You Should Know
Is laziness a trait or are there reasons behind it? People don't know that some of the hidden causes of laziness are depression, fear, or stress. Read more »
Link copied!
Interesting Articles
Personal Development
The False Sense of Calm in the Comfort Zone

The false sense of calm in one's comfort zone is a set of circumstances people passively adapt to. Therefore, it…

Words are not only the result of a vibrating larynx, processing neurons, and an organizing brain. We are the sum…

Wellness
Emotions Are Energy: They Create and Transform Us

Emotions are the score that orchestrates our daily lives. Sometimes the music is happy, lively, and intense, but after a…

Wellness
Fears Are Hidden in Anger and Rage

Unpleasant emotions, like anger and rage, do exist. However, they mask revealing and important messages. These emotions transmit something very profound about…

The mental and physical degradation we experience when we're facing a problem or group of problems can paralyze us. It can make us feel we will never get out. However, every problem…