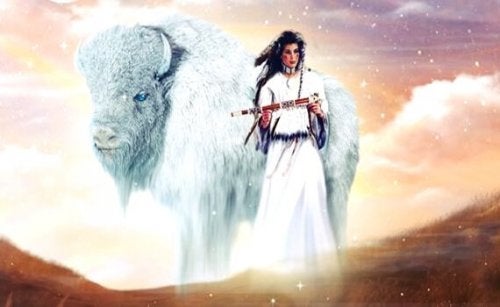 The Lakota tribe in the United States has a prophecy that says that one day the White Buffalo Calf Woman will return. She’s a wakan, a wise and magical woman who will reunite all of Mother Earth’s children with her powers. Her return will also restore our balance with nature, a relationship that’s ruined now.

There’s something truly miraculous about Native American tribe legends, no matter how old, how many centuries have passed, or how little connection we have individually to these ethnic roots and cultures. These oral traditions always leave us with lessons to think about.

The legend of the White Buffalo Calf Woman is over 2,000 years old. This story is originally from the Lakota nation, one of the towns on the Turtle Islands off of North America. Therefore, this prophecy is an ode, a call to hope, and a desperate prayer for the Lakotas in this current political situation.

Over a year ago, we started hearing talk of the Dakota Access Pipeline. This project was meant to transport oil from North Dakota to Patoka, Illinois. This mega-structure is over 1800 kilometers long and crosses several Native American territories. It’s a cultural and environmental tragedy that set a war into motion between the oil moguls and the Native Americans, aided by environmental groups like Greenpeace.

After Barack Obama stopped the project at the end of his term, Donald Trump reactivated it. The Native Americans are continuing the fight, hoping that the White Buffalo Calf Woman will help them…

The White Buffalo Calf Woman, a feminine figure of power

Joseph Chasing Horse is spreading the word about this amazing legend. This United Nations ambassador for the Lakota Sioux nation never misses an opportunity to tell this prophecy, which unifies many of the different indigenous tribes of America.

As the prophecy goes, the White Buffalo Calf Woman appeared over 2,000 years ago, during a period of great famine, war, and turmoil between various tribes. Two young Lakota soldiers were passing through with their lean horses, looking for something to hunt. Suddenly, they saw the figure of a woman enveloped in warm light and gleaming mist.

The woman was accompanied by a white buffalo. She was tall, svelte, and dressed in sacred embroidery. She had a feather in her hair and sage in her hand. This woman was incredibly beautiful. So much so, that one of the soldiers approached her lustfully. However, before he could even graze her skin, a great dark cloud hovered over him. He was momentarily frozen by a bolt of lightning.

The other soldier immediately fell to his knees in terror, thinking that the same fate awaited him. However, the beautiful woman brushed a hand through his hair and spoke to him in his language. She told him that she was a wakan, a holy woman who had come to help them.

A new era of old traditions

The Lakota town gave the woman a warm welcome. They prepared a teepee for her. As soon as she stepped inside, the morning turned to twilight and all of the lands affected by famine and misery were wrapped in an amber and rosy light. Despite this, the people tried to offer her the best of what they had. They gave her roots, insects, dried herbs, and fresh water.

After this, the White Buffalo Calf Woman taught the Lakota people how to smoke a pipe. She offered them tobacco made from red willow bark and encouraged them to go from tent to tent. This honored the sun, creating a circle of strength, and giving thanks. Later, she initiated them in a series of spiritual practices they could use to revere nature, praying with all the right words and completing ancient ancestral rites that the tribe had more or less forgotten.

She invited them to sing with her to please Mother Earth. They sang melodies, verses, and incantations offered up to the four cardinal directions. She reminded them about the importance of keeping up the ceremony of the pipe of peace. In the ceremony, men and women came together to honor their souls, the community, and their union.

The White Buffalo Calf Woman said farewell. She told the Lakota she would protect them as long as they followed these ceremonies and took care of the earth. Before going, she pulled a great herd of black buffalo from the horizon. There were so many of them that the mountains turned black and the ground trembled under their hooves. The world boomed forcefully with the sound of the animals. They would finally bring about the survival of the Native Americans.

The holy woman left them, saying: “Toksha ake wacinyanktin ktelo”, or “I shall see you again”. The Lakota keep on repeating this message to this day as they dream of her returning to purify the world. They hope she will bring harmony, balance, and spirituality to all nations.

Olive Oatman, the Twice-Captured Woman with the Blue Tattoo
The history of Olive Oatman is both unique and sad. Captured by two different tribes of Indians, she found both true suffering and true happiness. Read more »
Link copied!
Interesting Articles
Culture
The Importance of Self-Love When Choosing a Romantic Partner

Culture
7 Benefits of Friends, According to Science

Friends are one of the greatest sources of support we will find throughout our lives. Anyone who has had the…