What's Good Will Hunting About?

Good Will Hunting is about a violent young man with a brilliant mind. Through its dialogues, you get to know the protagonist's stormy past in depth. The film has a rather positive story with a universal message. 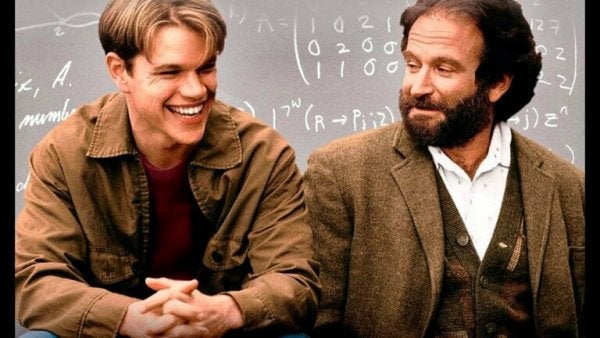 Filmmaker Gus Van Sant had the support of the audience and critics in both alternative and independent film circles back in the 90s. He had a predilection for marginal characters and telling the struggles of people who didn’t fit the mold. Thus, it wasn’t surprising for him to direct Good Will Hunting, a film that became a hit.

1997 was a simple year and clearly positivist cinema flooded the big screens. Good Will Hunting is such a 90s film in this regard. It has a simple plot, with little to zero intrigue, and with a predictable outcome. However, the message gets the audience’s attention right from the start.

The film presents a troubled, charismatic young man with a clear tendency towards violence. Will is rather smart though and, against all odds, reveals a special talent for mathematics, along with a photographic memory.

He ends up with legal problems as a result of a fight, from which he’ll be able to get out thanks to Professor Lambeau, a scholar in the field of mathematics who sees something good in him.

The other side of the coin is that the young man must also go to therapy. Unfortunately, he doesn’t obtain good results with any psychologist until he comes into contact with Sean, Lambeau’s former colleague.

The film gradually reveals the reasons that led to Will’s violent behavior and why he no longer wishes to connect with anything or anyone. Of course, Robin Williams shines as Sean, his mentor, a character who largely reminds the audience of his role in Dead Poets Society (Peter Weir, 1989).

A set that works

Curiously, unlike other films of its type, Good Will Hunting doesn’t have a literary precedent; that is, the script is original.

Ben Affleck and Matt Damon weren’t as well-known at the time. It’s true that both had taken their first steps as actors with considerable success, but they were still strangers for most people.

The script for Good Will Hunting began to take shape as an effort to do something different; something together, as friends. At first, the film was supposed to be a thriller but the final result was a far departure from this idea.

Similarly, the producer was reluctant to include the two young actors in the cast but he eventually gave in. In fact, one of the strongest points of the film lies precisely in these actors’ interpretations. Yes, Robin Williams was a rather outstanding actor, but the message of the film wouldn’t have penetrated so deep without the work of Affleck and Damon.

In fact, the scenes where Williams and Damon interact are already an important part of the cinema of the 90s. Both perfectly embody their characters, so much so that their relationship seems authentic.

Another success of this film is its soundtrack, composed by Danny Elfman, who was rather popular in the 90s as the lead singer of the new wave band Oingo Boingo. Although his name alone may not ring a bell, you probably already know and love many of his tunes.

His collaborations with Tim Burton are well-known, as he collaborated in Edward Scissorhands, Mars Attacks, and Sleepy Hollow, among others. Also, you may not know it but he also composed the popular The Simpsons tune. In Good Will Hunting, Elfman did a great job emphasizing the emotions of every character through his music.

In short, the film has some good ingredients; the same that made it so successful. It got nine Oscar nominations, of which Robin Williams won the Academy Award for Best Supporting Actor while the one for Best Original Screenplay went to both Matt Damon and Ben Affleck.

Good Will Hunting has a clear message

The plot of Good Will Hunting is timeless because it transmits a positive, optimistic, and overcoming message. And even though this message could be boring due to its predictability, it’s, in fact, effective due to the way the story unfolds.

American cinema has and continues to provide countless films of this type that don’t age well and are either forgotten or lack credibility because their message is too superficial.

Why, then, has Good Will Hunting survived the passage of time? Well, it’s probably because the cast matches the strength of its dialogues. This is because, far from containing a mere clever message, it focuses on the most human part of the protagonists.

Who hasn’t seen a story like this before? A young man in the suburbs plagued by emotional deficiencies and unable to control his violence, who finally overcomes his obstacles and becomes stronger as a consequence. It’s nothing new. It isn’t groundbreaking and, yet, it still captivates the audience.

There’s a rather memorable scene in which, sitting on a bench, Robin Williams’s character leaves young Will speechless. The mentor proves that no one really knows how they feel or what they’ve lived and, thus, they don’t actually know the world.

The power of books

Books and philosophy help people understand and know the world but experiences are personal and subjective, after all. Little by little, the audience gets to witness Will’s progress, along with his learning process.

The young man isn’t shown superficially. In fact, the film shows him through the eyes of his psychologist. He’s a character who ends up opening Will’s eyes and empathizing with him. Mainly because, like all human beings, he also carries a heavy burden on his back and must also confront his own demons.

This message of overcoming is easily captured by the viewer. The whole of the film, despite having little action, ends up being entertaining. It plunges the viewer into a kind of reconciliation with the past, acceptance, and forgiveness.

As usual, the protagonist’s past has direct consequences on his present. And although the audience doesn’t understand at first what exactly Will is about, they do know something traumatic happened to him during his childhood. Perhaps being an orphan made a huge impression on him and broke his spirit.

The viewer also gets to see how he relates to his friends. Apparently, they’re the only people he trusts. This is quite evident in his attitude towards work and even in his relationship with Skylar, a young medical student.

Will doesn’t seem to want to get involved, sentimentally or in any other way, with anything or anyone. He prefers not to have responsibilities. He doesn’t wish to get carried away by his feelings.

The abandonment he was a victim of during his childhood led to an irrational fear that kept him from wanting stability. It’s precisely for this reason that he doesn’t want to listen to Professor Lambeau’s instructions. He doesn’t want to travel with Skylar either. In fact, he’d rather continue with his life as it is.

Social pressure also has a role in the film. You may sometimes take for granted that a person with high abilities must make the most of them and follow a certain path. If so, then perhaps you should ask yourself what the real desires of a given individual are and not expect them to do what others think is best for them.

Final notes on Good Will Hunting

It’s clear that Will is special, as he’s a remarkably talented young man. Still, this doesn’t mean he must follow a certain path. As opposed to the pressure exerted by professor Lambeau, Sean reacts with understanding. He tries to lead the young man into deciding what’s best for him, to solve his past conflicts. Also, into building his own path all on his own.

In short, Good Will Hunting is all about positive thinking and, thus, nothing new. It’s such a 90s film. However, its importance lies in the universality of its message and in the way it manages to convey emotions and, finally, provides the audience with an optimistic message without it being mere entertainment.

Insomnia the Film: Those Inner Demons That Don’t Let You Sleep
In 2002, Christopher Nolan directed a thriller entitled "Insomnia," about a rather strange murder in Alaska. The main character is Will Dormer (Al Pacino,) an influential policeman from Los Angeles. Read more »
Link copied!
Interesting Articles
Cinema, Television, and Psychology
Quentin Tarantino and His Taste for Violence

Cinema, Television, and Psychology
6 Philosophical Movies About Identity You Should Watch

As many movie fans know, the big screen is a place where we can explore and investigate the very essence of what…