Classical conditioning is a process whereby learning is achieved through associations between an environmental stimulus and a natural stimulus. 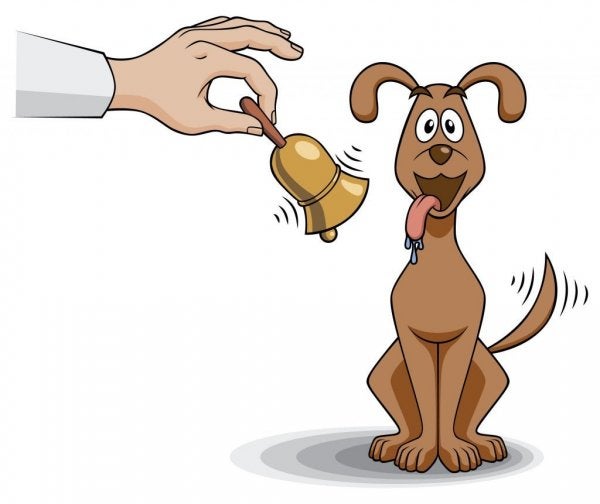 What’s classical conditioning? Well, it’s a type of learning that had a massive influence on behaviorism. This is a school of psychology with a systematic focus. It arose in the 19th century. Behaviorism assumes that many behaviors come about as a result of associations. In other words, they’re reflexes produced by a conditioned response to certain stimuli. This association also results in an individual’s experiences.

“Don’t become a mere recorder of facts, but try to penetrate the mystery of their origin.”

The foundations of behaviorism lie in the assumption that all learning is produced as a result of interactions with a being’s environment. This shapes their behavior (teaches). In classical conditioning, the learning process starts with an initial stimulus that provokes a bodily response. One example of such a stimulus is the smell of food. This initial response should be unconditional, regular, and measurable. One example of such a response is salivation. This stimulus is then associated with a neutral event. For example, a sound. This event didn’t produce the response (salivation) before the conditioning process.

After repeatedly presenting the stimulus in close spatial-temporal proximity to the subject, the neutral event acquires the functions of that stimulus. At this point, it causes the same response as the unconditioned stimulus. That’s how a sound can end up producing salivation in a dog, for example.

It’s important to keep in mind that classical conditioning requires placing a neutral signal before a natural reflex. In Pavlov’s classic experiment with dogs, the neutral signal was a certain sound. The natural reflex was salivation in response to food. Upon associating the neutral stimulus with the environmental stimulus (the food), the sound (conditioned stimulus) was able to produce the salivatory response.

The basic principles of classical conditioning

The first part of the classical conditioning process requires a stimulus. We’ll call this the unconditioned stimulus. This stimulus will automatically provoke a response. Let’s continue with the example we proposed beforehand. In this case, salivation is a natural response to smelling food.

Acquisition is the initial learning stage. At this point, the person establishes the response for the first time and then strengthens it gradually. During this acquisition phase of classical conditioning, a neutral stimulus is repeatedly paired with an unconditioned stimulus.

Remember that the unconditioned stimulus creates a response. This should happen automatically and naturally. The response should occur without any learning at all. Once the association is there, the subject will begin to enact a certain behavior in response to the previously neutral stimulus. Experts now call this stimulus the conditioned stimulus. At this point, the subject has acquired the response.

Nevertheless, sometimes a learned response can come up again suddenly. This can even happen even after a period of extinction. Spontaneous recovery is the reappearance of the conditioned response after a rest period. The same can happen after a period of diminished response. If the conditioned stimulus and the unconditioned stimulus are no longer paired, extinction can happen very quickly after a spontaneous recovery.

The generalization of the stimulus is the tendency of the conditioned stimulus to evoke similar responses after the response is conditioned. There’s a famous experiment that John B. Watson conducted called the Little Albert experiment. In it, he conditioned a young child to fear a white rat. The boy showed generalization of this stimulus. They observed this when they saw he was afraid of other white blurry objects. This included stuffed animals and even Watson’s own hair.

There are five main principles in classical conditioning. They are acquisition, extinction, spontaneous recovery, stimulus generalization, and stimulus discrimination.

The advertising you see on game shows on TV is one of the many examples that exist. Within this positive and exciting environment, someone watching the shows could begin to develop an excitement response upon hearing about a product in a commercial. They would associate it with the environment.

The ABCs of Human Instincts
What do we mean when we talk about human instincts? While some theories believe all humans have instincts, others claim they only have drives. Read on! Read more »
Link copied!
Interesting Articles
Theories
Three Work Motivation Theories