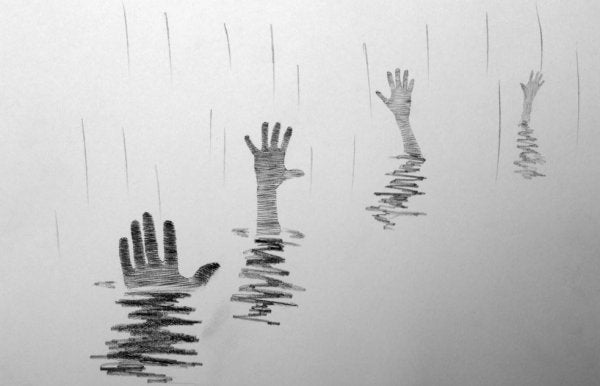 We are all dependent from the moment our lives begin. In our mother’s womb and the first time we cry. When we fall for the first time and in our first encounters with unknown worlds. We are practically and emotionally dependent. We need other people to do things for us, or at least show us how to do them. All of us need other people because we are social and emotional beings. Does that mean we are necessarily victims of emotional dependence?

Nothing can cause emotional turbulence like another human being. Think about your first kiss, seeing someone for the first time in years, or a soothing hug. You breathe, I breathe, we breathe.

As teenagers, we fight tooth and nail for our independence. Afterwards, we realize that true independence isn’t possible. Our primal needs don’t respond well to independence. Think about love and affection, encounters and disagreements. Creating a utopia for independence wouldn’t be good for us.

Emotional dependence: a fact of life, or chains that bind us

So if emotional dependency is natural, why does psychology treat it like a problem to be avoided? One reason is that psychology is not immune to social trends. These trends are becoming more and more individualistic. Another is that dependency can become negative when it is fixed on a specific person. When we give someone else the responsibility to deal with the whims and appetite of our inner child and we think that person is irreplaceable.

Let’s see a simple example. Ana is making some changes to her home decor and she would like to move a piece of furniture. It’s too heavy for her to move. She needs someone’s help. She could help herself by studying physics and mechanics and building a jack on wheels to move the furniture. However, that solution isn’t helpful at the moment.

The most obvious solution is to find people who are stronger than her. Ana thinks of her kids, but they are on vacation. Instead, she asks her nieces for help and they are delighted to lend a hand. So, Ana is dependent, but she’s not dependent on her children. If they can’t do it, she’s capable of looking for help elsewhere. The same happens with emotional independence/dependence.

It becomes dangerous when we depend on a single person. When we expect them to bear the responsibility for our emotional state. It is dangerous because it weakens us. In the long term, it will ruin the relationship. However, the worst part happens before the relationship ends. We will destroy ourselves with desperate measures to avoid losing the person on which our happiness depends.

The four steps of emotional dependence

The path to emotional destruction caused by dependence tends to have four distinct steps. We start to go down these steps when we begin to fear loss. This type of fear is usually unfounded and makes dependence even stronger.

“If I couldn’t feel loved and needed, if you denied feeling bad for me and taking care of me out of pity, if I wasn’t even able to make you hate me, now you will have to notice me whether you want to or not. From now on, I am going to try to make you fear me.”

The first step for a dependent person is to try to make himself indispensable to the person he depends on. He constantly talks about and highlights the contributions he makes to the other person’s life. “If it weren’t for me…”, “Who else would do this for you?”, “You can try, but you’ll never find anyone else like me”.

The dependent person can also try to become a type of guarantee or insurance. “If you stay with me, you’ll never lack for anything”. He attempts to make the other person stay with him, even if it’s just for some kind of benefit.

We walk down to the second step when the first one doesn’t work. The second can also keep working with the first. In this step, the dependent person plays the victim to get pity. His daily struggles become true tragedies. If the other person tries to leave during these moments, she looks like a monster. This is usually a strategy that a dependent person knows well and has probably used before to get attention.

The third and fourth steps are paradigmatic. With these steps, he attempts to protect himself from what he most fears: indifference. These two steps are interchangeable. They might happen at the same time, the order isn’t important.

In addition, both steps allude to primal emotions: hate and fear. Fearing indifference, the dependent person tries to make the other person hate him. It is a form of self-deception. He wants to be present in the other person’s life. He tries to create lastings feels and bonds, even if the feeling is hate.

The fourth step is making threats. “If you even think about leaving, I don’t know what I’ll do”, “If you disappear I won’t have a reason to live”, “If you decide to leave, I promise you’ll never see me again”, “You better not cry after I’m gone”. The dependent person attempts to spread their fear of loss. This fear is a ruse, but it serves as a substitute for love.

The dependent person suffers and makes others suffer

One way or another, the dependent person is tortured by his own dependence. If he is the victim of anything, it is of trusting his fate and hopes to someone else. This forces him to sacrifice himself so that person doesn’t leave. He truly feels that if the other person leaves, he will lose his life. Much of what he says is manipulative, but underneath it there is true suffering.

Unfortunately, it is difficult to admit to emotional dependence. You risk being labeled cowardly, weak of character, or even stupid. Nevertheless, identifying dependence is the first step to rebuilding it. The key is understanding that although our needs are unique, the people who can satisfy them are many and the ways they can be satisfied are varied.

5 Keys to Overcoming Emotional Dependence
We human beings are “social animals” and we need others; that is indisputable. But how much do we need them? Where is the line Read more »
Link copied!
Interesting Articles
Psychology
How to Turn Your Sensitivity into Your Biggest Strength

According to researcher Elaine Aron, around 15-20% of people are highly sensitive by nature. These people - who tend to feel overstimulated,…

Every person who's made an appearance in my life is a character in my story. The person I am today…

Bullying has unfortunately become an enormous problem in schools. Places where young kids mistreat their insecure classmates who have acne on their faces, or who aren't the most attractive kids…