What Is Parental Alienation Syndrome? 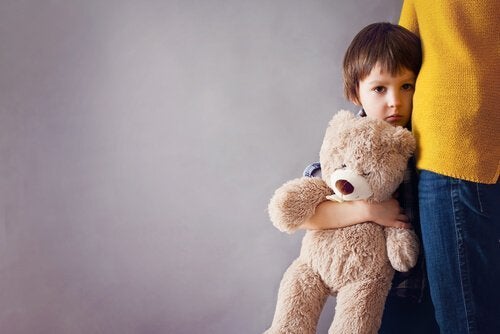 The divorce or separation of a child’s parents is usually very traumatic for them. Their family, which they considered to be the backbone of their entire life, breaks. And they can’t do a thing about it. They will almost certainly feel sad, uncertain, and very vulnerable. Unfortunately, some parents take advantage of this situation to use and hurt their ex-partner. The result is something called Parental Alienation Syndrome.

It seems inconceivable that parents could act so selfishly. Sadly, hatred and resentment towards the ex-partner is sometimes stronger than their feelings for their children. Many parents are not even aware of the harm they’re doing to their children. For them, their own suffering is more important than their children’s.

They’ll tell the child that his father or mother doesn’t want to see them. They’ll lie to the child and try to get them to lose respect for the other parent. The psychological consequences in the child can become problematic. It can create pathological hatred towards the parent, now a victim of parental alienation.

What is Parental Alienation Syndrome?

Parental alienation syndrome is a kind of psychological child abuse. It is the manipulation of the tender minds of children, with the purpose of changing their perception of their other parent.

This kind of abuse may come from one parent or both. The alienating parent won’t think twice about ridiculing the child if they express feelings for the other parent. Many will even use the family environment to reinforce the ​​contempt. Relatives and friends may end up as accomplices in this kind of abuse.

The parent will also go into detail about the reasons for the divorce and make themselves the victim. The hope is that the child will feel sorry for them and blame the other. It’s really about revenge. But the tragedy is that the child is the one who suffers the most. They’re the real victim and should never have to deal with this kind of toxic behavior.

What can lead a parent to behave in this way?

The correct thing to do in a divorce situation is to separate two very important concepts. Being a bad partner doesn’t mean being a bad parent. Of course, this idea doesn’t apply in situations of domestic abuse. It is quite logical that having been abused by a now ex-partner can make them afraid that history will repeat itself in their children.

In other situations, depriving a parent of being able to see their child is almost certainly a sign that the separation or divorce is not going well. Selfishness and a great lack of self-esteem may rear their ugly heads. And that’s on top of the lack of sensitivity and empathy, so damaging to the children.

The parent that has been alienated may also have some type of personality disorder. The most common in these sort of situations are narcissism and Borderline Personality Disorder.

What can I do if I am a witness or a victim of this behavior?

If a person is accused of this kind of child abuse in court, it can influence custody rights. Before threatening the parent or notifying child protective services, try to speak with them. Attempt to make them see that their behavior is not at all appropriate. They need to understand that it’s the child who ends up suffering most.

If their manipulative attitude persists, it is up to a judge to decide what they should do. Children may refuse to live with the other parent because of the hatred the other parent fostered in them. Parental alienation syndrome is a very complex problem that usually requires some sort of psychological care.

The parental alienation syndrome can be quite devastating in children. Anxiety and fear can affect their relationship a lot and stunt their emotional development.

Feeling ridiculed when they express positive feelings towards the other parent also influences their self-esteem. Many will drag these traumas into adulthood, creating an irreconcilable gap between them and the affected parent.

To sum up, parental alienation syndrome is not something to take lightly. A separation or divorce should not become a psychological battle between those who, at one point in their lives, made the decision to start a relationship. It should certainly not involve the children and cause them more harm.

Children don’t get divorced
Divorce is one of the most traumatic experiences we can go through. Read on to find out how our children are affected when their parents break up. Read more »
Link copied!
Interesting Articles
Psychology
It's So Hard To Say Goodbye

Psychology
Being Extremely Intelligent: The Dark Side We Don't Talk About

Being extremely intelligent does not always guarantee success or happiness. There's another side of high IQ that we don't always…

When we were in grade school we used expressions like "I passed" or "The teacher failed me". Many times we weren't able to admit the cost of our decisions. We…