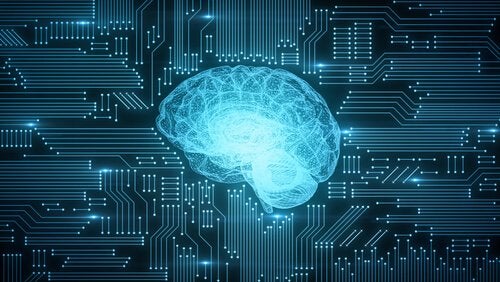 Understanding how the brain works is one of the biggest challenges in the field of psychology. Thus, different approaches and perspectives exist. In fact, there was a revolution after the emergence of cognitive psychology and the Turing machine. From then on, researchers began to consider the brain an information processor.

The computer metaphor represents the first theory created to explain the functioning of the brain. Since people soon realized how much it didn’t contemplate, they intended to seek new explanations and cognitive psychologists created a theory known as connectionism.

However, before we explain connectionism, it’s important to understand how the computational theory of mind views the brain. For this reason, we’ll review the main aspects of it in the next section.

Cognitive psychology and the computational theory of mind

Cognitive psychology considers the human brain an information processor. This means it’s a system capable of coding the data coming from the environment, modifying it, and extracting new information from it. In addition, the system incorporates these new data in a continuum of inputs and outputs.

The computational theory of mind considers the brain a computer. Through a series of programmed algorithms, it transforms information inputs into a series of outputs.

The most relevant failures of this theory include the speed at which we process information, the flexibility with which we act, and the imprecision of our responses. If our brain had programmed algorithms, we would have other types of responses. Our responses would be slower, more rigid, and much more precise than they actually are due to all the processing steps that need to be carried out. In short, we’d be like computers.

Although we can try to adapt this theory to new evidence, the computational theory of mind still has faults. This is where connectionism comes in. It’s a much simpler theory than the previous one and explains brain functioning a lot better.

Connectionism explains that information is processed through patterns of activation spreading. But what are these patterns? In simpler terms, it means that when information enters your brain, neurons begin to activate, forming a specific pattern that produces a specific output. This forms networks between neurons that will process information quickly without needing preprogrammed algorithms.

To understand this, let’s look at a simple example. Imagine that a person tells you to define the concept of a dog. When the word reaches your ear, the set of neurons associated with it automatically activate in your brain. The activation of this group of neurons spreads to others it’s connected to. This may include neural patterns related to the words mammal, bark, or fur. And this will lead you to define a dog as “a mammal with fur that barks”.

According to this perspective, in order for these systems to work like the human brain seems to behave, they have to fulfill certain conditions. The basic properties that must be met include:

This way of interpreting neural functioning not only seems very interesting, but the studies and research conducted on it prove fruitful. There are many computer simulations of connectionist systems on memory and language. These simulations are very similar to human behavior. However, we still can’t claim that the brain works in this exact way.

In addition, this model has also has contributed to the field of computing and artificial intelligence.

To conclude, it’s important to understand that connectionism is much more complex than what we explained in this article. If you’re curious about it, don’t hesitate to continue researching it and its implications.

Neurons: What They Are and How They Work
Neurons are the basic functional unit of your nervous system. Our behaviors and perceptions have everything to do with the way neurons work and interact with its "companions." Read more »
Link copied!
Interesting Articles
Psychology
Anxiety: A Silent Epidemic

There are so many manifestations of anxiety, and they are so frequently the cause of medical consults, that many experts have already categorized it as a true epidemic. It is…

Psychology
The Werther Effect - Why Suicide Can Be Contagious

On the morning of the 7th August, 1962 the world woke up to a shocking situation. That night the body…

You might have been told at some point that you don't think before you speak or make a decision, as…