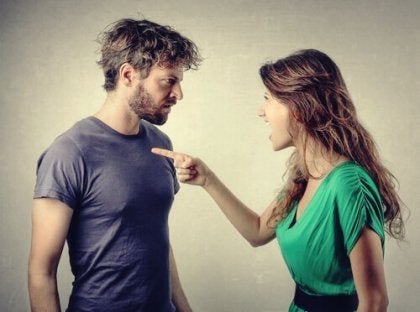 One of the signs that indicate that a person has suffered from victim blaming is that they constantly apologize for everything. They ask for forgiveness before even speaking, they apologize for laughing, or feel like they need to make excuses for asking a question. All of this indicates that a latent, unfounded guilt gravitates over their world.

This type of attitude doesn’t come from thin air. What normally happens is that someone has rejected this person because of what they say or the way they act. In any case, this is definitely victim blaming manipulation.

A victim of this manipulation basically feels that they do everything wrong. The manipulator points out their mistakes and failure isn’t tolerated, nor any “incorrect” behavior. They have a hard time figuring out what they’re doing right or wrong.

In the life of someone who feels guilty about everything, there’s always someone who uses or used victim blaming manipulation tactics. It’s usually someone who has a history with the victim. Someone loved, admired, or who has authority over that person. The way they act is subtle, and sometimes even violent.

These are the main tactics used in victim blaming manipulation:

In short, victim blaming manipulation consists of one person violating the other person psychologically so that they aren’t questioned. Their main weapon is minimizing them through various means.

Getting out of this deadly cycle

In order to get out of this sick victim blaming manipulation game, the first thing you need to do is recognize your feelings. Do you feel guilty frequently? Do you constantly apologize for actions that don’t need to be forgiven? If so, it’s vital that you admit that someone is manipulating you. Sometimes this isn’t easy, because this person could be your mother, your partner, or someone you really love or admire.

The most important step is actually recognizing the situation. This person generally gets angry with you, or with the world. You normally feel as though you’re going to unleash this anger even more. You overcome this fear in order to move on.

Also, you need to understand that, if you’ve done something wrong, you shouldn’t hold on to guilt. Just identify what you’ve done wrong, take responsibility for it, and try to fix it. After that, there’s nothing more you can do.

What you should do next is stop the victim blaming manipulation. You have to very observant to do this, but also keep your cool. Here are some good methods:

It’s not easy to undo victim blaming manipulation, but it’s not impossible. The secret is adopting a new attitude and being perseverant. You’ll see results in no time!

Psychological Manipulation Techniques You May Be a Victim Of
Manipulation can generate a deep impression in each of us. Learn about the most often used psychological manipulation techniques. Read more »
Link copied!
Interesting Articles
Psychology
When You Don't Feel Anything During Depression

Psychology
How to Improve Your Memory and Increase Your Intellectual Capacity

Having great intellectual abilities and maintaining mental sharpness is very important, in every aspect of life. Not just during our…

Psychology
A Behavioral Approach to Depression

Depression is an illness that affects the mind, but in most cases it develops due to a series of external…

Psychology
Stifling the Talents of Children "For Their Own Good"

Talents are those intellectual abilities or skills that lead us to develop an activity with great skill. When we say…

Psychology
The Primal Wound - the Influence of our Childhood Traumas

The primal wound (sometimes known as primary wound) is an unresolved trauma. It has to do with the violation of…