Vasopressin is a kind of hormone that's very sensitive to the effects of alcohol. It has important functions, such as maintaining homeostasis, reabsorbing urea, and improving memory processes. 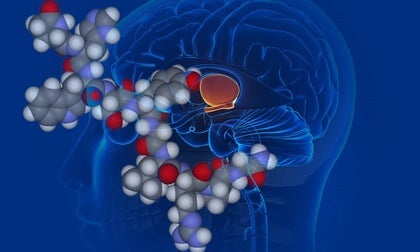 Vasopressin, or arginine vasopressin, is one of the most well-known and important hormones in the body. For example, it’s crucial for homeostasis, which is the balance of electrolytes maintained by the retention or reabsorption of water, sodium, and glucose. We also know that this anti-diuretic hormone acts as an analgesic by reducing pain.

Vasopressin is a natural hormone produced by humans and most mammals. However, most people know about it due to the medical uses of the synthetic version of vasopressin. It’s common for treating certain types of diabetes, hemorrhages, cardiac problems, or even severe infections.

Within the world of endocrinology, you could say that few elements fulfill so many roles and basic functions for survival. In addition, humans frequently experience some interesting things as a result of this hormone. For example, scientists discovered that the more stress you’re under, the less vasopressin your body gets.

There are many consequences to getting less vasopressin, such as increased fluid retention, cardiac problems, and kidney diseases, among others. All of this internal balance vasopressin regulates is disrupted. Thus, understanding how it works, what its functions are, and what problems are related to vasopressin can be very helpful.

Vasopressin is also used to treat different life-threatening health problems such as hemorrhages or septic shock.

Vasopressin was discovered and described for the first time by Vincent du Vigneaud in 1950. We should clarify that it’s not a single element but an oligopeptide containing up to nine amino acids.

It’s also important to know that the hypothalamus is responsible for producing this hormone. The posterior lobe of the pituitary gland releases it into the bloodstream depending on different body needs. These needs are:

Curiously, the consumption of alcohol seriously affects vasopressin release and functioning. As this study from the University of Maryland explains, there’s clear evidence of disrupted vasopressin regulation caused by alcohol consumption.

The roles of vasopressin

The roles of vasopressin fit into two types of well-differentiated processes: homeostatic processes and social processes. In addition to the basic functions that protect the internal balance and prevent dehydration and even acidosis, it’s also interesting to know that the anti-diuretic hormone plays a strategic role in human social behavior and even cognitive processes.

Vasopressin also promotes water retention in the kidneys. That helps control urination and the elimination of waste products every so often. If you weren’t able to retain these fluids, you would be constantly dehydrated.

Vasopressin is well-known due to its ability to increase blood pressure. In addition, some studies have shown that vasopressin is more effective than epinephrine in cases of systolic cardiac arrest. Most of the time, however, doctors prefer to use a combination of both hormones.

The anti-diuretic hormone often acts as a neurotransmitter when it interacts with certain neurons to facilitate different processes, such as pain relief. In fact, studies such as this one from the University of Montreal in Canada yielded some very interesting results.

Vasopressin reduces pain in stressful situations. In other words, when you go through stages of elevated anxiety and stress, taking synthetic vasopressin can reduce your muscle pain and headaches, among other symptoms.

Vasopressin also has the power to improve memory and learning (De Wied and Versteeg, 1993). Scientists believe that this set of amino acids acts on the hippocampus and facilitates the formation of memories.

Vasopressin mediates and facilitates the mother-child bonding process. Research has also found that it plays an important role in fathers. Vasopressin increases their protection, care, and attention instincts during pregnancy and newborn care.

In conclusion, researchers continue to explore and experiment with vasopressin’s many functions. In certain countries, for example, scientists have developed a kind vasopressin-based “nasal spray” to treat addiction-related memory loss.

The future of endocrinology is full of possibilities. We can’t wait to see what scientists discover as they continue to research vasopressin and other hormones!

The Biological Explanation of Love
We like to think of love as a magical force, too powerful for us to fully understand. The truth is, however, that there is a biological explanation of love. Read more »

Progesterone is a female hormone that belongs to the steroid family. A woman's ovaries produce and release it. Along with…