Discover all about trichotillomania in children in this article! 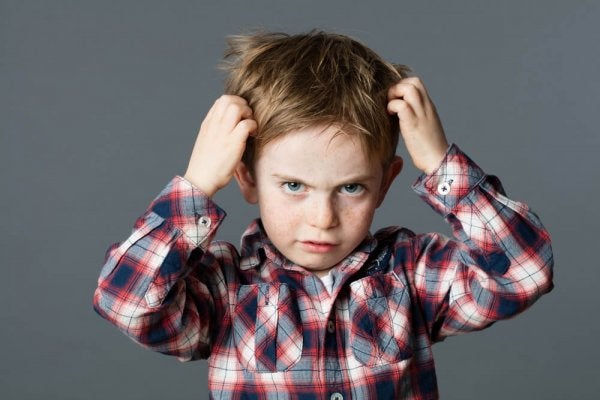 Some people feel the urge to pull out their own hair. The physical consequence, which is immediately visible, is hair loss that may lead to bald spots in the head, eyebrows, and eyelashes. Trichotillomania in children is a worrying disorder.

However, it’s important to rule out other diagnoses first (such as hair loss due to alopecia areata) or other dermatological issues that may explain the patient’s bald spots.

If the issue manifests in the first years of childhood, it tends to develop before the age of two or from three to four. During that stage, hair pulling is a habit to the child, such as thumb sucking. This is because they’re unaware that it’s a compulsive behavior.

Usually, hair pulling manifests during family conflicts (parents who’re getting a divorce, splitting up, or arguing a lot). But children may also do it in bed when they’re bored or tired. That’s why it’s so important to stimulate children so that they don’t develop mindless habits that harm their physical and psychological health.

In adults, this disorder can result from stressful situations or anxiety. It can manifest as the “automatic” subtype, which is the case of 75% of patients, and they do it out of tiredness, boredom, or during sedentary activities (watching TV, driving, studying, etc.).

Thus, depending on the degree of awareness during this hair pulling, there are two types of patients: those who’re more aware and show more compulsive behaviors in times of emotional distress and those who do it automatically, possibly during sedentary activities.

Causes of Trichotillomania in Children

Psychological, genetic, biological, and environmental factors may play a role in the manifestation of this condition, and they range from person to person.

Thus, a child whose parents suffered from it is more likely to suffer from it as well. This may be due to an excess of a certain neurotransmitter. It can also be the consequence of external variables, such as family conflict, stress, depression, or a state of emotional deprivation.

In all cases, bald spots may lead to isolation or self-consciousness. Plus, severe dermatological or infected lesions may appear in the spots, which can be extremely dangerous. That’s why it’s so important for parents to detect trichotillomania sooner rather than later.

Along with uneven hair, these children may have bowel obstruction, discomfort, or stomachache. Furthermore, it’s common for them to deny that they pull their own hair. They tend to feel more stresses as they pull their hair, meaning they may engage in other self-harming habits.

Trichotillomania in children usually disappears before the child starts school. To help them with this issue, parents must be aware of the condition.

If your child isn’t improving, your doctor may recommend medication and psychological support through cognitive behavioral therapy. The goal of these last two is to eliminate the habit completely by reinforcing alternative, more appropriate behaviors.

How to Help Children with Math Anxiety
Math anxiety is a common issue that has many different causes. In this article, we talk about them and tell you how to overcome them. Read more »
Link copied!
Interesting Articles
Clinical Psychology
The SIMS Screening Test: Are These Symptoms Real?