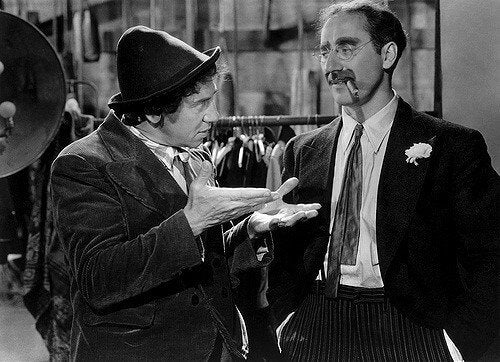 There are so many Groucho Marx quotes that even some other ingenious quotes that he didn’t say are mistakenly attributed to him. That’s why it’s always worth remembering his amazing reflections-

Groucho Marx was known for his famous films with unforgettable quotes such as, “Those are my principles, and if you don’t like them… well, I have others”. Aside from being funny, this quote hides a fierce criticism of the hypocrisy that reigns in many societies.

Thus, due to this actor‘s wit and humor, we thought it would be an excellent idea to list some of his top quotes. Let’s see if we can dissect the fine irony of his quotes and discover the criticism behind them.

“Better to remain silent and be thought a fool than to speak and remove all doubt.”

It’s often said that “If you don’t have something nice to say, don’t say anything at all”. However, it seems that Groucho Marx’s quote was way more bitter and accurate.

It doesn’t seem that Marx really wanted to say that everyone is stupid. His intention was to probably remind us that some people talk excessively beyond what’s purely necessary. So if we don’t have much to contribute, we should probably remain silent.

“Marriage is the chief cause of divorce.”

Some people feel offended when they hear this quote. However, it rings true. If people didn’t get married, divorces wouldn’t exist.

In both legal unions and in couples who are only together in the emotional sense, it’s evident that a separation can only happen after two people decide to end their relationship.

However, we tend to see divorces as ruptures or catastrophes. But perhaps it doesn’t have to be that way. Maybe we shouldn’t judge relationships according to their duration, but according to their quality. A couple may be happy for a while, but their values, priorities, or ways of thinking may change. Because of that, they may decide to break things off.

“I must say I find television very educational. The minute somebody turns it on, I go to the library and read a good book.”

Groucho Marx was much more than an actor. In fact, he was a great thinker and writer. He published a couple of memoirs and many stories, such as Memoirs of a Mangy Lover. However, it’s striking that that’s what this actor thought of television.

Marx predicted that television would drift toward low-quality programming and empty entertainment. In fact, his films contained irreverent humor and fierce criticism, as seen in some of his key works like Duck Soup.

“Politics is the art of looking for trouble, finding it everywhere, diagnosing it incorrectly, and applying the wrong remedies.”

Groucho Marx was capable of hiding great social criticism inside sarcastic remarks. It’s no surprise that the world of politics didn’t get away unscathed.

It’s clear that Marx was very critical of leaders. He felt that they look for problems where there are none and come up with inappropriate solutions.

“I don’t care to belong to any club that will have me as a member.”

This is undoubtedly one of Groucho Marx’s best quotes, but also his most scathing one. It’s a harsh criticism of hypocrisy and the masks many people wear that in no way represent their true intentions. The good thing about Marx is that he started by criticizing himself.

These are only five of his best quotes, but he has many more famous ones. For that reason, we decided to mention a few other ones:

34 Incredible Quotes on Self-improvement and Motivation
Great characters in history have left as their eternal legacy, their best thoughts in simple but beautiful quotes on self-improvement and motivation. Read more »
Link copied!
Interesting Articles
Stories and Reflections
Bokuden: A Beautiful Story