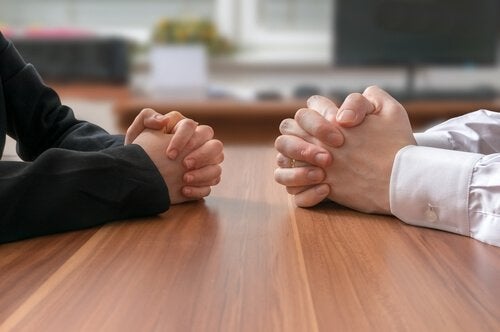 Assertiveness is a fundamental skill in handling certain situations in which people take more liberties than they should. We all have to face the lack of consideration of another’s rights, and even a lack of respect. Establishing limits in a firm and calm manner is the key to not letting anyone walk over you. It is the key to getting people to respect you without disrespecting them.

One of the advantages of learning how to set limits is that, by doing so, we’re also acknowledging others’ rights. We are acknowledging our limits with other people. This means that being assertive by following this basic rule also turns us into more respectful people.

“Daring to establish limits is about having the courage to love ourselves, even when we run the risk of disappointing others.”
-Brene Brown-

Decide where your limits are

What do you consider too far? What are you willing to tolerate from other people, depending on the type of relationships you have with them? Determine what those limit are, for you as well as for others. Where they are depends on various factors. Among them are your personality, but also your values, your beliefs and your expectations in life.

It’s likely that some people will be upset by your choices, but that is not your problem. This may increase your difficulties trying to “fit in”. But if the price of fitting it is betraying yourself, you might have to ask yourself what the point is of going down that path at all.
The good news is that, over time, if you are capable of maintaining your limits in a peaceful manner, saying things the right way, people will get used to it and will start respecting you and even understanding those red lines that you have established.

Give a margin, be flexible

Despite the fact that it’s important to establish clear limits, you have have to leave a bit of a margin. You have to be flexible. Everyone is not going to share in your opinions and that can give way to misunderstandings. Not everyone that crosses your lines will have bad intentions. In fact, they may even do it with the best intentions possible.

In these cases, you should take a second to consider the other person’s good intention. Always behave as if there was no malice in other people’s intentions and actions.

“When you know how to say no, yes has a very different flavor.”
-Alejandro Jodorowsky-

Too much forgiveness can be counterproductive

Despite the flexibility you can show, limits are there to be respected. If you constantly ignore when someone crosses your limits, you’ll be making the problem more difficult. That’s why you have to set things straight as soon as possible.

The good thing is that if you say things the right way, you only have to say them once. But the longer you wait, the more complicated it will be. The greater risk you will run  of offending the other person, even if you speak to them cordially.

Therefore, don’t forget that the more you bend your red lines, the harder it will be to recover your lost ground. And the more you are exposing yourself to having a conflict. Thus, if you want respect, you have to start by respecting yourself. Do forgive, but don’t make yourself out as a fool. Once, twice tops, that is more than enough.

“Say what you need to say. You can say it softly, but firmly, speaking from the heart. You don’t need to be critical or tactless, nor do you need to blame others or be cruel when we say our truths.”
-Melody Beattie-

In order to say things assertively, it is not enough to simply blurt out your list of limits and boundaries. You also can’t just tell the other person, “You’re crossing the line, please, respect my space.” Besides setting things straight and having the ability to speak peacefully, you also have to know what to say.

These are the four keys to speaking with assertiveness:

This type of communication can be a a powerful corrective for bad behavior. Seek out a re-education based on your relationship, but simultaneously stay open, honest and sincere. Of course, there is always the possibility that the other person won’t change their attitude, but at least you have created the opportunity for a peaceful understanding.

In any case, avoiding a violent confrontation is always a good idea. If the other person is in the mood or wants to fight or argue, don’t fall into their game. You are not going to get anywhere like that. Therefore, it is not worth it to keep going. Tell them calmly that it would be best if you left it for another time when your moods won’t interfere with finding common ground.

Unfortunately, our society is still far from abolishing chauvinism once and for all. In that sense, a useful way of fighting against this bad habit is to be well-informed. Hence, knowing…

You must not allow anyone to control your actions, thoughts, and behaviors, because you are free and you do not…

Psychology
The Art of beign a Coward

Do you know someone who could be defined as a coward? What are the reasons that you would describe them this way? Can you justify this belief? At work, in…