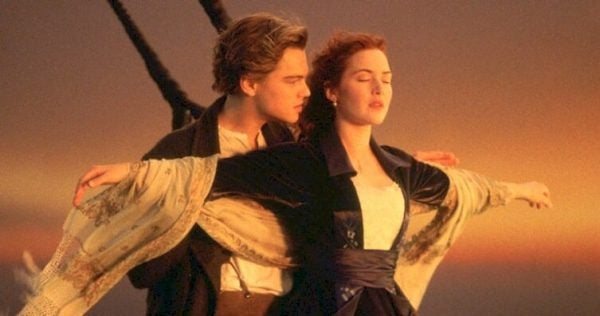 Titanic is one the best known blockbuster movies of all time. Its success was so grand that it became an epidemic. Everybody competed to see who went to the movie theater to see it the most.

Titanic premiered in November 1997, but it arrived in Spain in January, 1998. It was re-released in 3D in 2012 as a commemoration of the centenary of the famous sinking ship. Twenty years have since passed since the first time we saw Titanic. However, it’s very much still alive as an icon of contemporary cinema.

History of the Titanic

The Titanic’s history has been monumental since its birth. It was not only the most luxurious ship of its time, but also the largest transatlantic ship at the time. However, the ship’s life was brief and it sank on its maiden voyage. This sinking caused 1,514 deaths out of the 2,223 people on board. It was a true tragedy in the Atlantic’s icy waters.

The Titanic’s history has been wrapped in mystery, premonitions, and controversy. The shortage of boats and White Star Line’s management were criticized heavily. In addition, most of the victims were third-class passengers, a tragic display of the social inequalities of the time. For this reason, it’s not surprising that it inspired numerous films. The first film, Saved from the Titanic, appeared shortly after its sinking in 1912. However, the best known Titanic film is undoubtedly Cameron’s.

Cameron’s film, in addition to breaking box office revenue records that we had never seen, left us with truly touching and tragic scenes because of special effects. Beyond the story of Jack and Rose, Cameron also rescued some real characters that were in the Titanic. These characters include Molly Brown, Thomas Andrews, Benjamin Guggenheim, and Captain Smith, among others.

The tragedy, the love story, the special effects, the set, the costumes and the unmistakable My Heart Will Go On made the film stand out with eleven Oscars. Cameron invited us to dream, to relive a tragedy and a time full of social inequalities. He conveyed his fascination with the Titanic. This worldwide fascination is reflected in the many trips taken to the Titanic exhibition.

“They called the Titanic the dream ship… and it was, it really was.”

Our search for love

Undoubtedly, in addition to the sinking and accompanying tragedy, the most remarkable thing about the film is Jack and Rose’s love story. They’re two young people who come from completely different worlds, but they seem to complement each other perfectly. This story presents us with an ideal love. It starts with a crush, moves quickly, and ends in the most tragic way possible.

Love has always existed. It’s everywhere, but it’s very difficult to define. Greek philosophers proposed some theories about love. Psychology addresses love and film and literature love to talk about it. Love escapes rationality. We have difficulty understanding it, leading us to propose an infinite number of theories.

“A women’s heart is a deep ocean of secrets.”

For example, in Plato’s Banquet the author narrates a myth that describes the constant search for a soulmate. The myth explains that originally the first beings had a round shape with four arms, four legs, and two faces. Later, they would be divided in half, giving rise to the human being. So, this is why we go through life constantly looking for our other half.

Love can be seen as giving us energy or the source of inexhaustible inspiration. It’s capable of moving our world and everything that surrounds us. Finding the half that we lack would bring us balance. It’s a spiritual and almost divine search, and in movies and literature death frequently appears when it comes to love. There’s examples of this everywhere, such as in Romeo and Juliet. In the well-known work of Shakespeare, young lovers must face a social barrier, as happens in Titanic.

Titanic, the story of Jack and Rose

Psychology highlights Stenberg, a psychologist who theorized about the triangular theory of love. In his theory, he explains that for a love to be true, three dimensions, passion, intimacy, and commitment, have to develop. We can easily identify these three dimensions in Jack and Rose. From the beginning of the film we can see that the two characters desire to know one another. In other words, they want to connect in an intimate way. We also see a strong passion between them, as if an uncontrollable force led them to be together. Of course, commitment appears in the movie with the famous phrase “if you jump, I jump”.

The Titanic’s love story is so magical and fascinating. It leads to an impossible love, which presents many signs of idealization. These signs include the crush, irrepressible passion, obstacles, social differences, and of course, tragedy. This is an idealization that has fed our imaginations for forever. However, these are merely idealizations. This type of love is so divine and unattainable that we can only access it after death when the soul escapes the prison of the body, as we see in Romeo and Juliet.

“Remember, people love money. Pretend to have a gold mine and you’ll enter the club.”

As we said, Jack and Rose belong to two different worlds. Jack is a third class passenger, and he arrives at the Titanic by pure luck (or misfortune). He gets his ticket by winning a poker game. Rose, on the other hand, is traveling first class with her mother and fiancé, Caledon Hockley. Rose, unlike Jack, isn’t happy. Her life is nothing but a farce. Her father left her an inheritance plagued by debt, and to avoid losing their status Rose’s mother decides that Rose must marry Hockley, a very wealthy man.

We see inequalities even among first class passengers. For example, Molly Brown’s character is a wealthy woman. However, she generates rejection from the rest of the passengers because she’s “new rich”. Perhaps because of her humble origins, Molly Brown proves to be one of the most empathetic passengers, contrasting with the pride of Rose’s mother.

Despite all of these social differences and the impact they had on a number of victims, the film also invites us to reflect on happiness. You only have to see the scenes that cover the third class party to realize that these people act in a natural and spontaneous way. Despite their difficulties, they’re able to enjoy themselves. These differences are supposed to bother us and upset us. However, they’re also a sign that although money opens up a range of possibilities, it doesn’t provide happiness.

The Psychology of Time: Why We Perceive Time in Different Ways
Why do we have a different perception of time? Why does it seem to fly by for some and drag on for others? It's time to delve into the psychology of time! Read more »
Link copied!
Interesting Articles
Cinema, Television, and Psychology
The Science of Sleep - The Film