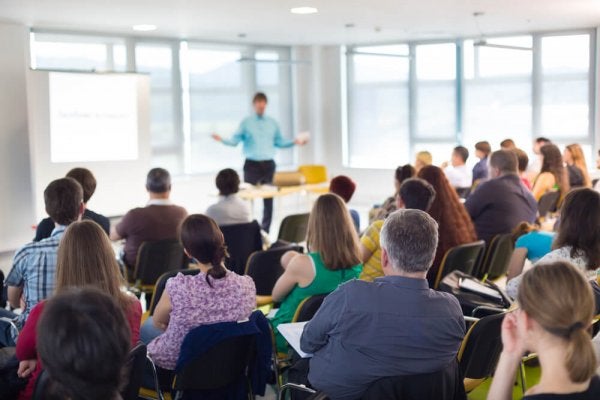 The basis for therapeutic programs focused on the acquisition of public speaking techniques and the loss of stage fright are several factors that work best together. Anxiety response is usually the most common. These programs work on physiological, cognitive, and motor aspects. They do so through deep breathing, self-instruction training, and the development of verbal, non-verbal, and vocal skills.

Thus, the level of self-control increases and the behavior becomes more adaptive. The third technique focuses on developing the sort of verbal skills that increase self-confidence.

Diaphragmatic breathing should be free and well managed. It’s a type of breathing that, in addition to helping you reduce your anxiety levels, gives you a greater reserve of air while speaking and allows you to reach your voice further. This, in turn, increases your self-confidence. Chest breathing (up to the lungs) increases your stress level. On the contrary, breathing with the diaphragm promotes your parasympathetic response and relaxation.

Diaphragmatic breathing, also called deep breathing, carries more air to the lower part of the lungs. This is the area with the most capacity, so breathing from it guarantees better oxygenation and promotes the cleansing of your lungs. It isn’t a difficult technique but you should train to do it properly with a specialized therapist. This way, you do it properly and make the most of it.

The main idea of ​​this method is the gradual introduction of self-verbalizations, internal verbalizations, thoughts, and self-instruction. This change in internal dialogue is what influences an individual and modifies their behavior. This method arose in the 1960s when Dr. Donald Meichenbaum developed it for aggressive and hyperactive children. In order to shape it, he relied on studies by Lev Vygotsky and Piaget on the importance of language to control motor behavior, even though it turned out to be a method with very positive techniques for solving problems in general.

Regarding public speaking anxiety, these techniques proved to be a valuable aid in overcoming stage fright. By molding thoughts through self-verbalizations, you manage to modify your internal dialogue and control your behavior.

This method consists of five stages. In the first two, the therapist acts as a model to imitate. Then, in the other three stages, the individual practices the self-instructions. First, they do so out loud and then, very quietly (masked), and, finally, the self-verbalizations become disguised thoughts or self-instructions.

Training in public speaking requires the use of appropriate linguistic resources, a good structure of the ideas to be presented, and an adequate record of the language to use. Training in these areas boosts the speaker’s self-confidence.

Likewise, non-verbal language says almost as much as the verbal language, from facial expressions to body movements, eye contact, and the management of physical spaces. Good body language training is essential to develop public speaking skills.

Vocal elements and learning to handle the voice are other key points. Thus, the human being unconsciously relates a voice to a personality type.

Finally, the most important vocal elements to work on when it comes to public speaking techniques are voice, pitch, emphasis, velocity, rhythm, projection, and resonance. The voice reaffirms or destroys the first image of a speaker. It’s very important for the verbal, non-verbal, and voice elements to be in harmony and reflect a balance. As in almost everything, the important thing is that, in the end, there’s a balance of coherence between what you project, say, and maintain.

3 Strategies to Get Over Your Fear of Public Speaking
Are you tired of feeling held back by your fear of public speaking? If you've had to face this fear, you probably have already heard a lot of advice Read more »
Link copied!
Interesting Articles
Personal Development
Solving Problems: Why Do We Always Do Things the Same Way?

Problems are, naturally, one of the greatest concerns in life. Life isn't easy and is hindered by the difficulties that…

Personal Development
"Forgive Me": Magical Words that Can Transform Relationships

Personal Development
How to Improve Your Active Listening Skills

You probably think that you're a good listener. But are you right? Can you improve your active listening skills? In…