Have you ever heard of the parasympathetic nervous system? It's a vital and amazing part of your body. Learn all about it in this article! 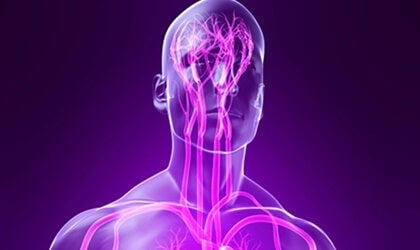 Relaxing after exerting yourself or a stressful situation; regulating your heartbeat after a run or a shock; relaxing your lungs and reducing how much oxygen enters them in order to calm us down. All these essential processes in our day to day lives are regulated and controlled by one special part of our body: the parasympathetic nervous system.

Recently, we talked about the sympathetic nervous system and how it’s involved in mobilizing our bodies and the physiological response to threats and stress.

But today, we’ll be talking about the system that has the opposite effect. It’s part of the autonomic nervous system that helps restore the energy levels in your body. This set of nerve fibers and branches of nerve endings carry out this task automatically.

Although it may not seem like an interesting subject, there’s more to it than you may think. Knowing how this type of structure works makes it easier for us to better understand why we are the way we are. We can use this information to look after our health and well-being.

An example of this is what a Harvard Medical University study discovered and was published in the journal Music Perception.

According to their findings, music has a therapeutic effect on the parasympathetic nervous system in people who have alterations in this area. It does this by improving its activity and functions. We see this in its ability to promote calm and relaxation, which is the characteristic that defines that parasympathetic system. Let’s have a look at this in more detail.

“Like bones to the human body, the axle to the wheel, the wing to the bird, and the air to the wing, so is liberty the essence of life. Whatever is done without it is imperfect.”

As we already stated at the beginning of the article, the parasympathetic nervous system is part of the autonomic nervous system. Now, to have an idea of ​exactly where it is, we need to imagine we’re right inside the brain. This is where it starts, through a series of cranial nerves. Later, we must descend to an area of the spinal cord called the sacrum, where it stimulates the nerves in sections S2 to S4.

Now we’re going to look at it in even more detail:

It’s interesting to note that the communication between neurons is carried out through acetylcholine, both at the preganglionic and postganglionic levels.

The parasympathetic nervous system and its functions

The sympathetic nervous system controls how your body uses energy. It helps you to move from a state of alertness to a state of calm. However, these aren’t the only functions it carries out; there are other more essential functions it’s in charge of. These functions are ones we carry out unconsciously or involuntarily, and they’re vital for keeping you alive.

The functions of the parasympathetic system in the cardiovascular system are controlled by the vagus nerve. Its main tasks are to regulate heart rate and reduce blood pressure.

The parasympathetic system also intervenes in cognitive processes such as memory, attention span, and problem-solving, among others. According to a study published in the Ruhr Bochum University of Psychology in Germany, when your heart rate is regulated, your brain works much better.

The parasympathetic system also mediates in the process of digestion in several different ways. It controls the stomach wall by facilitating contractions and peristaltic activity and facilitates the secretion of hormones such as gastrin, secretin, and insulin. It also regulates salivation and swallowing.

There is, however, one aspect that we mustn’t forget: digestion requires high levels of energy. Therefore, what the parasympathetic nervous system does is to focus all its energy while carrying out this process in your digestive system.

The parasympathetic system controls and regulates both sphincter elimination and urination coordination.

This structure, made up of nerves and ganglia, is vital for our sexuality. This system helps produce sexual arousal.

The function of this system in our lungs is vital for bronchoconstriction. This is the process by which the airways narrow to either block or decrease the flow of the oxygen.

When you’re in a state of rest and this system considers that you don’t need to capture any more light, it gives the order for your pupils to contract.

As we’ve discovered, the human body is as complex as it is perfect. Your body is always ready to react to any stimulus, adapt to any circumstance, and regulate its functions according to your needs.

Understanding each process of the autonomic nervous system (including the sympathetic and parasympathetic system) allows you to learn so much more about your body and how it works.

Neuroscience
The Temporal Lobe: The Center of Memory and Emotions

Communicating effectively. Reading and writing. Remembering the kiss your partner gave you this morning. Experiencing sexual desire. Trying to take…

Aggression is a complex and heterogeneous construct. There are basically two types of aggression: premeditated (predatory instrumental) and impulsive (affective…