The Three Masks of Pathological Narcissism 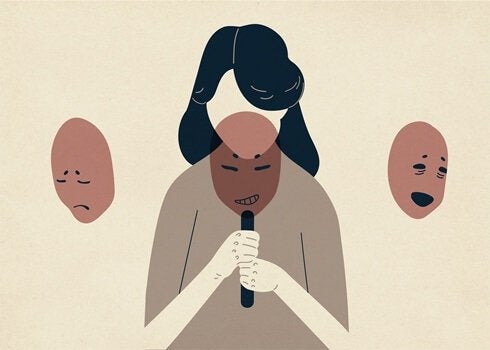 The masks of pathological narcissism are manipulation mechanisms that narcissists use to hide their intentions as well as their true condition. They don’t want others to see them as conceited or arrogant. That is why they hide behind these mechanisms. Sometimes it works and this ends up confusing those around them.

Narcissism is the esteem and egotistical admiration of one’s own attributes. Pathological narcissism, then, is when an individual overestimates their own qualities and also has an excessive need for other’s admiration. At the heart of this pathology is unconscious self-dislike.

“Postmodernism is nothing more than another step on the staircase to the personalization of the individual dedicated to narcissistic self-service and indifferent kaleidoscopic combinations.” [translation]

Those with distorted narcissism can be very destructive. In their desire to assert themselves, they end up being manipulative, cruel, or abusive to others. They aren’t doing it consciously. They’re deceiving themselves regarding their behavior. They make these masks to convince themselves and others that they aren’t overly proud. These are the three most typical cases.

Fake self-improvement is one of the masks that pathological narcissists use. It consists of taking initiative to advance and grow with the sole objective of awakening admiration, jealousy, or submission in others. This is not a sincere effort to become a better person.

One of the characteristics of pathological narcissism is a kind of self-esteem that experts call “contingent self-esteem”. This means that feelings of self-worth don’t come from genuine self-love. Instead, they depend on the value that others assign.

As such, these types of people try to be the best as the means to an end. Their ultimate goal is to impose their will on other people. They want other people to go along with their plans or feel inferior. Something that gives away this mask is that those who wear it repeatedly and publicly boast about their advances. They also complain when people don’t notice or praise them enough.

This is one of pathological narcissism’s trickiest masks. It has to do with taking on a lot of responsibilities that aren’t yours to “help” someone else. People who engage in this behavior might even go so far as to deprive themselves of goods or privileges and go through difficult things for others.

The problem is that their true intention isn’t to do good for others. Their goal is to make others dependent on them and to gain authority. Self-sacrifice allows them to carry this banner of kindness and generosity. However, they’re actually covering up a much more selfish goal. What they really want is to make themselves look good.

Just like the first mask, this one can also be stripped away relatively easily. The narcissistic individual wearing this mask won’t wait long before reminding you of everything they’ve done for you. They try to make those they’ve “helped” feel guilty and demand special treatment. They act superior to other people and often play the victim.

One of the most characteristic traits of this type of person is that they feel they have the right to get angry. In other words, they have carte blanche to be mad. Their anger is sacred. If they explode, it’s because other people made them do it. If they yell, it’s because they can’t stand people being unfair to someone as good as they are. They only get offended due to unfairness or for some other admirable purpose.

Sometimes they manage to convince other people that this is true. One classic example is bosses who mistreat their coworkers because of a supposed desire for improvement. Sometimes whole groups of people are victims of these grandeur fantasies.

The masks of pathological narcissism are mechanisms to hide the ego. Narcissists don’t want to seem narcissistic. That’s why they use masks to cover up their basic personality traits. Deep down, people who act this way are suffering a lot. What they need, above all, is help.

Narcissism: The Root of Aggression in Children
A phrase that usually adds to the violence, lack of self-esteem, and increasing narcissism in children; as well as an absence of educational resources Read more »
Link copied!
Interesting Articles
Psychology
Do You Know About Borderline Personality Disorder?

Surely you've heard about borderline personality disorder. A borderline refers to a barrier, a frontier, the limit that separates two…

Follow these habits to be more positive and you'll see that everything improves along with your perspective. Being positive is a skill you can learn. If you sit around waiting for…

Psychology
It's Good to Get Bored Every Once in a While

Being bored scares us. In fact, chronic boredom can be dangerous. It can lead to harmful behaviors, such as eating…

Psychology
Resilience: Learning from Your Suffering

Psychologists and scientists all over the world have tried to understand how people integrate their experiences and reflect on them later.…