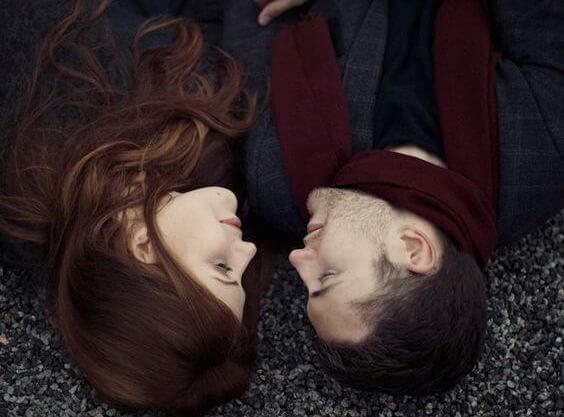 Don’t ask me how or why, but one August night I ended up sitting by the ocean next to a stranger, looking at the moon. Feeling like a stranger in my own skin.

We could have taken a walk on the sand, which is what most couples would do in such a setting, but that didn’t happen. We limited ourselves to debating why the moon wasn’t completely full, whether it was waxing or waning. In the end, all living beings are more than just science, influenced by the movements and shapes of the lunar queen.

Maybe he did the same.

Many people try to feed their insatiable hunger with fleeting, compulsive contact. And yet the stomach continues to growl, as though the body is crying on the inside. It’s deafening, but you eventually stop hearing it.

Maybe because we were yearning to feel more than just skin that night, we decided to goof around, creating caricatures of ourselves on an app, drawing ridiculous Ikea furniture assembly instructions in the sand, and running away from the beach cleaner.

The beach cleaner came and went as if in another dimension of time, while we either chatted or sat silently and sniffed our hands every now and then, checking to see if there was still of the trace of the sardines that we had gobbled down like cats. How strange it is to be with a stranger.

But then I realized that it’s even stranger to be a stranger to yourself. Whether we know it or not, that’s our eternal curse.

Suddenly, the moon shone on us like a spotlight, like when celebrities appear onstage. I don’t know whether it was before he said it or at the same time; all I know is that I heard him softly say, “sometimes I’m with myself, and other times I’m alone.” At that point, I looked at him, and I don’t know why but he stopped being a stranger.

Connection can turn a stranger into a friend

I drove him home, and when I stopped the car to say goodbye, something even stranger happened: I felt my skin. He had somehow touched something inside of me, ever so slightly, like a note in a guitar chord that causes the wood to vibrate – that’s how my skin felt. Van Morrison had to come on in the background to snap us out of the magnetism between us, like teenagers in a car.

I don’t know if it had been a while since I had kissed someone and I just forgot what it was like, or if I had just never experienced it before with all five senses, but to me, his lips tasted sweet and addictive.

Then the summer ended, and we never saw each other again. But that doesn’t matter.

Things aren’t defined by how long they last, even though they have a defined amount of space and time.

Whatever it was, I can’t reiterate enough that there’s nothing stranger than feeling like a stranger next to someone, even yourself, only to suddenly find yourself in some kind of house or temple that surprises you but also reunites you with yourself and the world.

Although it’s only for a fraction of a second, which leaves no room for worthwhile thought, it takes you back to the distant vault of childhood, where everything was magical and all there was to do was feel, dream, and live.

Magic exists, dear reader, and if not, sit next to a stranger and look at the moon sometime, whether that stranger is yourself or someone you think you’ve known your whole life, without expecting anything more, and tell me what happens.

7 Situations Where You Really Get To Know A Person
Many of us have friends all of our lives; some of them keep surprising us in good ways, and at other times, they disappoint us. Read more »
Link copied!
Interesting Articles
Wellness
5 Keys to Good Emotional Health

Wellness
Do You Know How Anguish Affects You?

Everyone, at some point or another, has felt how anguish holds the power to take over their lives, leaving a…

Monotony and routine can take the spice out of life and take over, leaving us without that spark that gives…

Wellness
Does Your Parents' Relationship Influence How You Choose a Partner?

Does your parents' relationship really have a big impact (like some people say) on your future relationships? Experience would probably say…