Thelma and Louise, A Feminist Shout in a Man's World 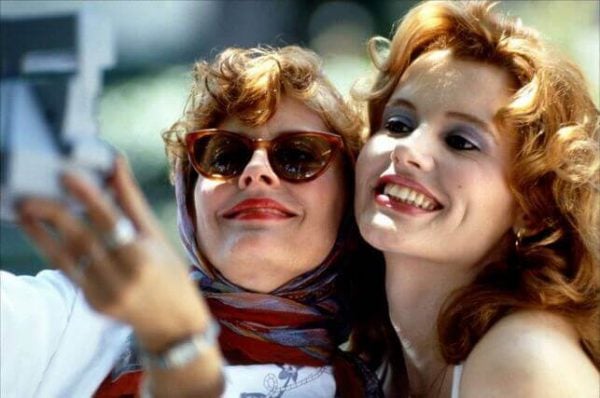 Thelma and Louise is one of those films that, despite the years gone by, has remained etched on our retinas, gifting us memorable and immortal scenes. Why do we love Thelma and Louise so much? Let’s consider for a minute more commercial cinema, more ‘Hollywood’, especially the cinema of the last century…

How many female protagonists do we have? How many stories in which a woman assumes the principal role come to mind?  And above all, how many of these women are not attached to a man or a strong romantic plot?

Surely, very few films come to mind that match this profile. And amidst this man’s world, of dominant alpha males, of submissive women whose plot is deeply entwined with something romantic or maternal, one title shines out: Thelma and Louise. It resounds like a war-cry, shocking and aggravating these strong and dominant men, shaking the virility of cinema.

And no, of course it’s not the most feminist film in history nor the most moving; but it’s a shout, a hymn to female freedom, to equality, a first hammer blow to the foundations of the patriarchy. And cinema, which is above all more commercial, has always been a man’s world with the inclusion of women much delayed, so much so that, even today, women are a minority in the sphere of directing.

A New Kind of Movie

Thelma and Louise, though directed by a man (Ridley Scott), was written by a women (Callie Khouri) and was led by two other women (Susan Sarandon and Geena Davis). We’re in 1991 and North American cinema is in its prime, but there are hardly any female protagonists.

Thelma and Louise broke this tradition, breaking the rules and inviting us to cry out, to destroy the bubble of submission and take control, to be masters of our own decisions and our own destiny. A real female road movie that came to stand out from the crowd.

“I’ve never been out of the city without Darryl. Why did he let you come? Because I didn’t ask.”

In this day and age, I imagine most people know the film, but if you haven’t seen it yet, it’s possible that what’s to come might contain a spoiler. One of the most surprising things about the film is the evolution of the main characters, of the protagonists.

Both come from the American deep south, from a completely patriarchal world where their roles are relegated to the domestic sphere. Their friendship will be the motor that takes them together on this peculiar adventure, very different from each other, very united, they develop a change in mentality, in themselves as they move along the endless highways of central and southern United States.

Together they decide to escape their routine for a weekend, to take themselves to a house far from the city and, in doing so, disconnect from the world they are submitted to. Louise is much more aware of reality that surrounds them, but Thelma is still quite submissive and innocent, without evil she trusts too much.

The journey, suddenly, takes a radical turn, when they both confront the cruellest form of their situation as women, the most bitter form of male domination: rape, something Louise already knows about and which leads her to act in the most unexpected way possible.

From this moment, the journey will be very different, what began as a weekend to relax and disconnect, becomes a route to self awakening, as they wage the war of women who live pressured in the world of men. The landscape will no longer be idyllic, nor will their clothes be of “model women” and of course, nor will they.

What guarantees does a woman have if she has suffered rape? What awaits Thelma and Louise having murdered a man in self defence? Why choose to live if you’re not going to be free? Both know that if the police come for them and they say what happened, for sure, no one is going to believe them and they will end up in jail. But nor do they want to be victims, no, they want to be free, they want to choose their future outside of the patriarchal society that surrounds them.

And so, from being submissive women, they become two fugitives, two rebels, but above all, friends. The loyalty and care between them goes beyond the screen, it shows us a story distinct from those that Hollywood tells us. Women are no longer rivals who compete for a man, now they’re accomplices, protagonists. At the same time, they’re the “thugs” of a story which, if men had been in the leading roles, would have made them yet more in the long list of “bad boys”.

Tired of society, tired of being relegated to second place and above all, desiring freedom, Thelma and Louise launch their particular fight against an injust system. A system which condemns them, or if it doesn’t condemn them labels them as victims, or worse.

This is NOT being a victim, this is being at the centre of macho views and reviews, not only in the film itself, but also in terms of the impact the reel had inside the industry. This “no” echoes the response that script writer Callie Khouri had to hear time and time again (every time she tried to take the project to production).

We’ve all felt the power of the patriarchy at some time or other, we’ve all felt scared returning home alone, we’ve all had to live through unpleasant situations… Thelma and Louise narrate this from the perspective of a woman.

Everyone thought that, after Thelma and Louise, something would change, that we’d start to see more films where women took control, taking up roles that were usually reserved exclusively for men; however, despite all the public success, this change never happened.

This highway journey, the persecution, and above all, the unforgettable leap into the dark, invites us to look for freedom, to defy the establishment, to decide our future. Cinema has sinned on the count of its machismo too many times, and what’s dangerous is that cinema inspires us, motivates us, and often, tries to be a portrayal of reality.

Thelma and Louise was a wake up call, an act of rebellion in a world where it seemed impossible. Friendship, disobedience, freedom or die, this is what Thelma and Louise proposes. Its essence is something which should never disappear.

“Certain words and phrases just keep drifting through my mind, things like: incarceration, cavity search, death by electrocution, life in prison, shit like that… know what i’m saying? And do I wanna come out alive?”

Life is Beautiful – a Film about Overcoming Adversities
Life is Beautiful is probably the most internationally recognized and acclaimed Italian film. The script, the soundtrack and the actors' interpretations make it an unforgettable film, capable of make us laugh and cry and transmitting an infinity of emotions. Read more »
Link copied!
Interesting Articles
Cinema, Television, and Psychology
7 Psychological Dramas from the Big Screen