The Zen Story of Bizan’s Dream

If you’re looking for an inspirational moral story, you’ve come to the right place. This intriguing Zen story about an old samurai and an old cat will utterly amaze you. 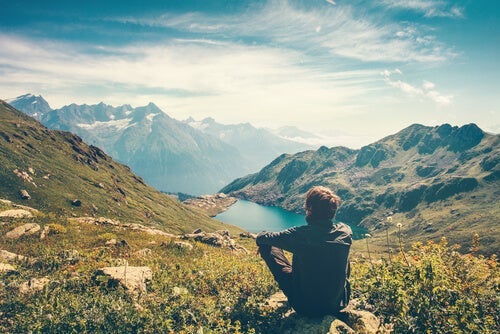 This inspirational Zen story about serenity teaches us that, in a distant country, there was a traveler. Believe it or not, this was the traveler’s first trip ever leaving his own home country. Of course, he wanted to learn everything about the intriguing country he was visiting.

After traveling for a long time on foot, he was incredibly tired. So, he decided to go to a place where he could cool off. Luckily, while hiking Mount Bizan, he found some inviting hot springs. These hot springs are among the most unique natural features of that area in Japan.

This Zen story follows with the traveler taking a dip. While doing so, he met an old samurai. After chatting for a while, the traveler and the old samurai became great friends. Fortunately, just as the traveler, the samurai was looking for enjoyment. After all, a samurai’s life can sometimes be monotonous.

the hard rock is happier still, it feels nothing.

There’s no pain as great as being alive,

no burden heavier than that of conscious life.”

The old samurai and the huge rat

There was a mighty samurai, a master of the sword, the greatest swordsman in all of Japan. So unstoppable was he with his sword that no one any longer dared stand against him. Therefore, he retired. He found a lovely, snug home on a clear lake surrounded by some cherry trees.

He began living a quiet life of reflection, practice, study, and peace. This went well for a few short months. But there came a day when the great Samurai’s lunch needed a bit more tamari. He traveled to the aforementioned Mount Bizan for it where he met a traveler. Later, when he came back home, he found a large, dirty, gray rat.

According to this Zen story, the huge rat was sitting on his table, munching on his soba noodles. It was also hatefully staring, with sharp little red eyes, at the master samurai. The samurai was flabbergasted. No one and nothing had ever been quicker than his own sword! Perhaps it was merely an off stroke?

He tracked the rat down to a corner of the room where it was gnawing into a sack of rice. In a lunge famous for its simplicity, the samurai stroked the rat. A stroke that he had once used to bisect a fly, he sent his sword leaping through its neck. According to this Zen story,  the rat now moved. The blade split the sack of rice instead of the rat.

So, now began a very unquiet week. The rat was everywhere, helping itself to the samurai’s very best food. Not only did it chew maliciously into his treasured and beautiful belongings, but it also made the home a mess. It left droppings freely in the food and bedding of the samurai’s once perfect home.

Besides, all the damage caused by the rat was matched by the samurai’s failed attempts to exterminate the rodent. Walls were sliced, fabrics were slashed, and fine pottery was smashed by the master’s errant blade. According to this Zen story, he accepted that he was overmastered by the rat. He needed help.

In a near town, there was a doctor who many knew him far and wide for his great learning. The samurai was his old friend. He went to him and explained his problem. The doctor prescribed a very powerful poison that had no taste and no smell. He took it home and prepared it into the rat’s favorite foods.

But no craft or guile could induce the rat to eat them. So, the samurai went to see his friend the hunter. “I’m good at killing men,” he thought. “But my friend is great at killing animals.” The hunter had just the solution. Since he raised hunting dogs, he picked the fiercest and most relentless one.

In fact, the dog was a little Shiba Inu which people believed was tireless in pursuit of his prey. Sadly, not even this indomitable canine hunter was able to get rid of the rat. When they first met, the odious rat even taunted the dog. This made the samurai even more perturbed.

The intriguing Zen story follows with the samurai thinking, “Maybe I need a different kind of help.” He packed a travel sack and went back to Mount Bizan. In fact, he specifically went to a remote Zen monastery. Here, he told his story to the master who gave him an old, tiny, raggedy, sleepy cat.

“Oh no,” politely said the samurai. “I, a great swordsman, couldn’t defeat it. The cleverest poisons couldn’t trick it. The rat even broke the fiercest hunting dog. This cat is barely bigger than the rat. I don’t believe it can defeat it.” “Yet, this cat is what you need,” said the master in this Zen story.

So, he carried the cat home. When they arrived, he set the old cat on the floor by the door. The rat dramatically dropped from the ceiling to taunt it. The cat looked at the rat and cleaned itself before taking a nap. The rat warily eyed it, keeping a fretful eye on the feline.

The cat’s eating, sleeping, grooming, and stretching. He would look at the rat, but never would he make the slightest threat in the rat’s direction. The rat challenged the cat, but the cat took no notice. The rat became nervous and high-strung. It started eating in secret, always with an eye on the cat.

Its hair fell out, while it lost appetite and weight. Sometimes, the cat walked towards the rat and it scurried away in terror. Yet, the cat merely lied down and ignored the now frightful rat. The samurai felt a house full of crackling tension. The rat felt a house full of tension and building terror. The cat simply ate and slept.

One night, it was looking at the rat, without much interest. The Zen story follows with the cat yawning while showing his pink tongue and old yellow fangs. The rat, shivering in lusterless, patchy fur, starved from nerves. Finally, it completely broke down and went running off into the night, never to be seen again.

Afterward, the samurai petted his beloved cat, and the cat purred. It was the first time the samurai heard it do it. This thought-provoking Zen story on serenity teaches us that we must live up to our potential to succeed. Don’t settle without knowing your potential.

The Psychological Benefits of Playing Chess
Playing chess has numerous psychological benefits, and today we'll be talking about them. Read on and be surprised at the conclusions! Read more »
Link copied!
Interesting Articles
Stories and Reflections
The Monsters that Lurk in our Minds