Loss of Appetite: Why Does It Occur?

Some diseases can trigger a loss of appetite, however, this symptom can also come from going through complicated or stressful stages of life. Discover some of its most common causes. 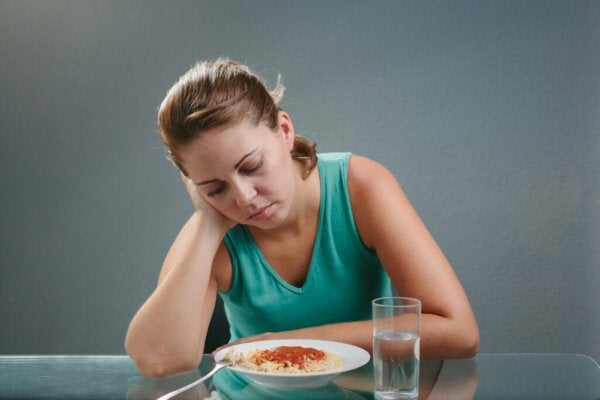 You’ve probably experienced a sudden (or gradual) loss of appetite before. This symptom can become normal if it happens at specific moments in your life. However, when this becomes recurrent or intense, you must go see a doctor so you don’t put your health at risk.

In this article, we’ll be talking about some of the possible causes that could explain loss of appetite. As you’ll see, there are both medical and psychological causes (in some cases, it could be a combination of the two).

Loss of appetite: why does it occur?

Before delving into the possible causes that may explain loss of appetite, we’re going to explain what it consists of. Basically, it occurs when the desire to eat decreases or disappears. In certain sources, an abnormal loss of appetite is called anorexia. Thus, it’s important that you don’t confuse it with the eating disorder, which has the same name.

Although loss of appetite can occur at different times in your life (and it doesn’t have to be something to worry about). For example, it may because you’re going through a specific time of stress. However, if this occurs repeatedly or intensely, the situation could make you sick. Thus, when this happens, the best thing to do is go see a medical professional so they can evaluate your case.

Why does loss of appetite occur? We’re going to list some of its possible causes. Nevertheless, each particular case should be evaluated.

Certain infectious diseases could explain loss of appetite, especially those that affect the digestive tract, inhibiting a person’s desire to eat.

Some of them are derived from food poisoning. On the other hand, certain food intolerances, such as lactose or gluten intolerance, could also reduce appetite.

Going through a time of intense emotional stress can lead to severe loss of appetite. Emotional stress can arise as a consequence of multiple things. For example, moving to a different country, changing jobs, unemployment, losing a loved one, the end of a relationship, falling in love, and the birth of a child, among others. As you can see, both positive and negative situations can generate emotional stress.

Side effects of certain drugs

Loss of appetite can also occur due to the side effects of certain medications, such as weight-loss drugs or psychostimulants (to treat disorders such as ADHD). On the other hand, chemotherapy can also cause this symptom.

Certain diseases can also cause loss of appetite or reduce a person’s appetite. A study that Domínguez, Nold, Llorente, and Ramírez (2011) conducted at the Superior Institute of Medical Sciences of Santiago suggests that kidney or heart failure and hepatitis are some of these diseases, as well as HIV.

Another disease that may explain this symptom is cancer. Sometimes, loss of appetite occurs during the advanced stages of this illness. Other times, individuals may experience it at the beginning.

Some mental disorders could also cause this symptom. The most common are depression, dysthymia, anorexia, anxiety disorders, and schizophrenia.

A person’s state of mind

According to a study by Baena, Sandoval, Urbina, Juárez, and Villaseñor (2005), a low mood could also explain a sudden loss of appetite. Perhaps you haven’t noticed, but when you’re feeling down, you tend to be less hungry. However, we must say that some people experience the opposite so they tend to eat more when they’re sad.

Old age is a stage in life where loss of appetite appears frequently (Bofill, 2005). In these cases, this symptom received the name of hyporexia (it’s also used to refer to loss of appetite in children).

Some of the causes that would explain hyporexia in older people are, on one hand, that elderly people tend to perceive smells and tastes less than younger people and, on the other, certain social and personal circumstances (loss of loved ones, feeling lonely or abandoned, and side effects of some drugs, among other reasons).

The time of year (summer)

Individuals tend to experience a loss of appetite more frequently during the summertime. This is so because, at this time, the body doesn’t need as much food to keep warm (which doesn’t happen in the winter, for example). In addition, metabolism slows down and, therefore, it’s common to lose the desire to eat.

On the contrary, what happens during the winter? You feel hungrier because your body needs more food to conserve heat and more energy to burn and maintain body temperature.

Loss of appetite: listening to your body

As you can see, the causes that’d explain why you feel a sudden or gradual, transitory, or prolonged loss of appetite are plenty; from intense or negative emotional states, to stressful situations, to medical illnesses or mental disorders.

In order to avoid putting your health at risk, you need to be attentive to your body and pay attention to your symptoms and vital situations and moods. Keeping this in mind will make it easier for you to ask for help when you need to.

Eating Anxiety is Due to Emotions, not Hunger
Sadness leads to hunger, as does the stress and frustration of that bad day at work. Many people with eating anxiety aren't aware of it. Read more »
Link copied!
Interesting Articles
Wellness
We’re Nothing More Than Ourselves And Our Experience

Wellness
How to live out our desires without limitations

We are torn between our desires and the limitations imposed on us. Life continuously poses us challenges and we have to…

Wellness
There Is Nothing More Beautiful Than Your Smile

Each day proves to draw a smile on your face, proves to transmit your happiness to others, and proves to enjoy each moment…

There are many myths about age. The first myth we could question is probably the belief that our age determines the possibilities that are open to us. When the truth is that…