The Characteristics of Adolescent Egocentrism

Adolescent egocentrism occurs because this is a difficult stage in which young people seek experiences that are the foundations of the values they'll embrace. Unfortunately, many parents have a hard time understanding it. 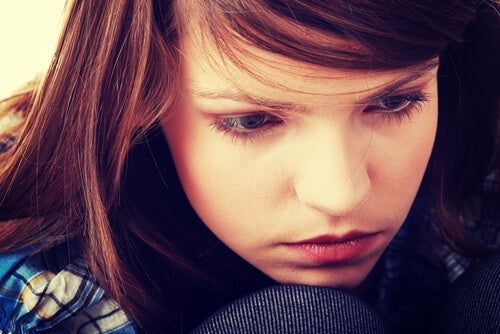 Adolescent egocentrism is common. This is because young people who’re entering this stage need to distance themselves from the rest. As a result, they adopt certain behaviors and attitudes, including a disregard for other people’s thoughts and feelings.

Egocentrism during childhood may be related to the lack of development described in the theory of mind. However, self-centeredness in adolescence isn’t related to an inability to perceive other people’s mental processes. Rather, it’s a way of asserting one’s independence, which is quite fundamental at this stage of life.

Today’s article will discuss the causes of this phenomenon. In addition, it’ll also reveal some strategies for the parents of teenagers who are going through it.

“Common sense is the collection of prejudices acquired by age eighteen.”

The main characteristic of puberty is constant change. Teenagers experience different types of emotional alterations that include a newfound interest in sex and a major transformation in their perspective of the world.

A young person must discover their place in the world and develop their personality from what they find around them. Therefore, the interest in new experiences intensifies during these years. This can obviously contribute to egocentrism.

You may already know that most youngsters under the age of 20 feel that nobody understands them. They may believe others can’t put themselves in their shoes (which is often true) as they begin to question the adult way of life. Thus, they withdraw into themselves to guard themselves against any “threat”.

Another main motivation of young people at this stage is the search for attention and approval. As they feel insecure about their place in the world, they often try to compensate for this feeling by engaging in extreme toxic behaviors. This is the case with arrogance, for example.

As you can see, adolescent egocentrism also responds to an attempt to protect themselves from external opinions that make them uncomfortable. It also helps them seem more confident than they really are. Although this isn’t negative per see, it can become problematic if it doesn’t progressively go away.

Is self-centeredness in adolescence a bad thing?

In general, it’s normal for teenagers to lack empathy, as this doesn’t necessarily project into the future. However, it becomes problematic the moment it keeps teens from functioning effectively in some areas of life.

This often occurs when parents fail to curb their teens’ lack of empathy. There are cases in which a teen’s family encourages them to ignore other people’s needs. These situations can lead to maladaptive behaviors.

How to deal with adolescent egocentrism

Therefore, the challenge for parents is giving their teen the freedom to explore without crossing certain boundaries. Although it may seem complicated, it becomes easier when they’ve taught their teen assertiveness. This is because this trait helps people communicate their needs and desires to others. It’s particularly useful when it comes to dealing with an extremely self-centered teenager.

What does it mean to be assertive in this particular situation? Well, it means that the teen needs space to experiment with their ideas and deal with part of their insecurities on their own. Thus, they need to follow this path towards adulthood, even if it’s painful.

Consequently, parents must understand this need and somehow make it work around their own need to protect them and be there for them. Parents dealing with adolescent egocentrism must also be able to set boundaries and enforce them, especially if/when the adolescent tries to overstep them. Keep in mind that you must have a good reason to enforce them, as teenagers don’t handle “because I said so” too well.

Now you know how to recognize egocentrism in your teenager. In addition, you also know that it’s normal at this stage. However, don’t hesitate to seek professional advice if you think it’s getting out of hand.

Self-Esteem Is Not Selfishness, Arrogance or Superiority
Self-esteem is a healthy regard for oneself. It is not arrogance or excessive pride. Read more »
Link copied!
Interesting Articles
Educational Psychology
Seven Famous Erik Erikson Quotes

Erik Erikson worked as a teacher until he met Anna Freud. The daughter of the famous psychoanalyst inspired him to start…

Educational Psychology
Humans Need to Feel in Order to Learn

The importance of creating a good footprint in your memory is for the purpose of being excited. Thus, humans need…