The Wolf of Wall Street: Ambition and Power 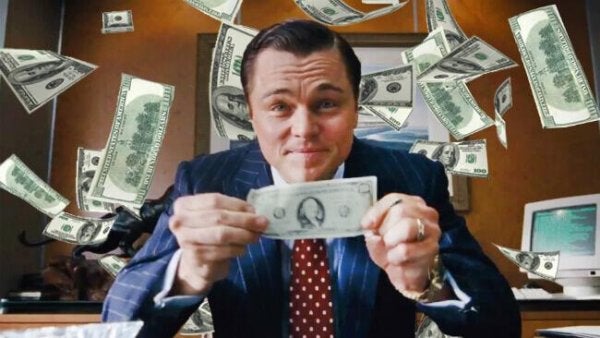 The Wolf of Wall Street (2013) is a US movie directed by Martin Scorsese, with Leonardo DiCaprio in the lead role. Despite how long it is, The Wolf of Wall Street has a fast and agile rhythm. It’s a movie that, when it seems like it’s about to end and nothing more can happen, surprises us. Each surprise is even crazier than the last, but it’s all quite real.

Scorsese is a well-known director. He has directed a lot of great films such as Taxi Driver, Raging Bull, Goodfellas, Casino, The Aviator, and an endless number of titles that bear his name. Although this movie may be far too long for many of us, the truth is that Scorsese meets his objectives. He wanted to unmask another facet of US society. He wanted to show the real pack of wolves inhabiting Wall Street.

The movie, regardless of how surreal it may seem, is based on Jordan Belfort’s memories. He’s a stockbroker who had been accused of a huge number of money manipulation crimes. Afterward, he dedicated himself to giving conferences on his past mistakes and ethics in the world of business.

The famous actor Leonardo DiCaprio, still without an Oscar at that time, embodies this charismatic and influential character. He manages to wow the viewers in some scenes and call the morality of this wolf of Wall Street into question.

“Jordan Belfort is like a kind of twisted Robin Hood who takes from the rich and gives to himself and his merry band of brokers.”

-The Wolf of Wall Street-

The Wolf of Wall Street: the broker’s personality

The movie starts off with a young Jordan Belfort, who is recently married. He begins to delve deeper into the stock market world. Soon, you can see that Jordan has an exceptional talent for this type of work. Despite not knowing much about the world of business, he achieves great things professionally in little time.

Jordan is convinced that he knows how to get rich, that he knows how to be a real “big fish” in the stock market world. Very soon, he opens up his own company. He begins by selling low-quality stocks to people he tricks by taking advantage of their lack of knowledge about the market. Eventually, he ends up selling to the richest people in the US. This company grows at an astounding rate and, consequently, so does his income. He’s even interviewed by Forbes Magazine. They nickname him “The Wolf of Wall Street”.

All kinds of excesses

What is it that Jordan demands of his employees? He doesn’t really care about their academic education. The important thing is their ability to persuade. The important thing is to sell, sell, and sell. He’s able to convince his future employees that they’ll be rich and, through that wealth, obtain happiness. They’ll be able to buy the best car, the best house, have the best wife. Their lives will be full of infinite luxuries and excesses.

His leadership and great power of communication make Jordan the perfect stockbroker. He’s an unscrupulous man who lacks morality and empathy. All he cares about is filling his pockets. All of this power-drunkenness will make him end up leaving his wife and marrying a young model. It’s interesting to see how he changes as time goes on. Nevertheless, we can clearly see that his principal motivations are: competitiveness, ambition, power, money, and status.

Amidst all of the chaos and the stress of the stock world, Jordan gives his employees certain things. He gives them adrenaline and “happiness”. He does this by turning his company into a true show where everything is possible. Prostitutes, drugs, parties, money flying about… Everything, absolutely everything is given so that his employees reach a state of euphoria. This will make them even more ambitious. They’ll end up becoming true sharks who’ll devour anyone for the sake of getting what they want.

“My name is Jordan Belfort. I’m a former member of the middle class raised by two accountants in a tiny apartment in Bayside, Queens. The year I turned 26, as the head of my own brokerage firm, I made $49 million, which really pissed me off because it was three shy of a million a week.”

-The Wolf of Wall Street-

The Wolf of Wall Street shows us the other side of the world of finances, globalization, and capitalism. Specifically, it shows us the world of the most powerful people. Jordan, a guy from the middle class opens up a pathway to a world that seems inaccessible for most mere mortals. Aside from that, he becomes the biggest shark in the tank. Is Jordan a genius? It’s undeniable that he has innate talent and great communicative abilities. But his ambition will lead him to surpass all the ethical limits we might imagine.

All of this professional success, dealings of dubious legality, and the rapid pace are not easy to keep up with. So it’s not strange that Jordan turns to drugs in order to stay awake. Surrounded by a world of excesses, he’ll go to unthinkable lengths. Everything in his life is filled with excesses: from work to sex, and even his family life.

Drugs, especially cocaine, and unrestricted sex give Jordan the energy he needs for his work. He considers himself to be invincible. Because of that, he offers the same to his employees. Nevertheless, this ecstasy and euphoria are only momentary. In the long term, his life deteriorates.

In this case, the members of the mafia seem to dress in ties and suits. They have yachts and mansions. Instead of guns, they have telephones. Ambition turns Jordan into a power and money hungry man. It’s precisely all that money that motivates him to drive himself into an unreal and irrational world. In this world, his personal relationships are practically nonexistent.

Everything is a gimmick in Jordan’s life. He can buy anything and everything is allowed – even women. They will be objectified and relegated only to the sexual realm. There are no unreachable goals in his life. Jorgan has full confidence in himself and he knows he can get anything he sets his mind to. The Wolf of Wall Street shows us the other side of the world of finances. This is the world of Wall Street. This movie presents a character who makes you ask many questions, yet who also teaches many great lessons.

Why are Some People Obsessed with Accumulating Money and Possessions?
The obsession with money and possessions is a very real illness in many people which can destroy relationships and even lead people to crime. Read more »
Link copied!
Interesting Articles
Cinema, Television, and Psychology
The Endless Trench - 30 Years Underground

Funny Games, an American film by Michael Haneke, is a shot for shot remake of the 1997 Austrian version of…