The Touching Story of the Old Man and the Crane 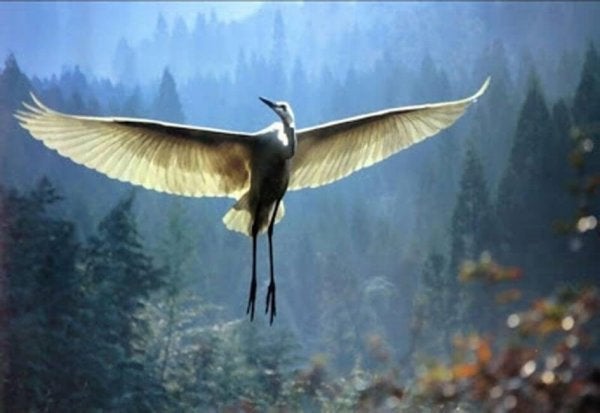 They say that a long, long time ago in a distant village, a man with long white hair arrived. This particular man was always accompanied by a crane. They were a strange pair, especially because these birds weren’t usually close to humans. Nevertheless, the old man and the crane went everywhere together.

The villagers commented to each other that the man was very wise. They said that he was famous throughout the region for his great teachings. In spite of his fame, the man was very humble. He settled next to a manger along with his crane. The crane always walked in front of the old man.

“When you are on the edge of the abyss and the night is dark, the wise horseman lets go of the reigns and trusts the horse’s instinct.” [translation]

The old man and the crane are interrogated

One night, a farmer went to the place where the old man and the crane were resting. The crane saw the man approaching and flapped his wings to wake up the old man, who was dozing. The old man blessed the visitor and asked him if he could help him with something.

The farmer told him that he wanted to know how to open the doors to heaven and the doors to hell. He wanted to always have access to heaven, and he never ever wanted to go to hell. That’s why he needed to know how to open the doors, so he could avoid doing it. The old man and the crane listened carefully. When the farmer finished speaking, the old man said, “What a foolish question! It is obvious that you are a completely ignorant man!”‘

Upon hearing this, the farmer because very angry and wanted to hit the old man. The crane intervened and stopped him. That is when the farmer saw that the old man was blind and the bird was his guide. He felt ashamed that he had tried to hurt the old man, and his anger dissipated. All he felt was compassion for the defenseless old man and he asked for his forgiveness. The old man then told him, “Your anger opened the door to hell. Compassion opened the door to heaven.”

Knowing and not knowing

The farmer was amazed. He knew that he was with a truly wise teacher. He immediately thanked the old man for the lesson and went to tell the whole village what had happened. After that, a long pilgrimage began to the old man and the crane. Some wanted answers, while others were content to just contemplate and be close to the old man and his crane. They transmitted peace.

One afternoon a young man went to see the old man and the crane. His attitude was mysterious. He got closer, and in a low voice, said the following:

“Teacher, there are people who have been saying bad things about you…”

“Wait a minute!” said the old man. “Are you sure about what you came to tell me? Did you hear someone speak badly about me?

The young man thought for a moment and then said:

“No. I didn’t hear it personally. Someone told me that it was true… In the village, that is the rumor that is going around…

The old man and the crane stayed still for a moment. The old man looked pensive. The crane, as always, was at his side, protective and alert. The beautiful bird was grateful to the old man because he had freed her from a trap in the forest. Since then, she had turned into his friend and guide, since the old man was blind.

After meditating on it for a while, the teacher spoke to the young man who had come to tell him the rumors that were circulating in the village. He asked him:

“This thing you came to tell me, is it something that will be good for me or for my friend crane?”

The young man thought for a moment. Then he said:

“No, not really. To be honest, it is just the opposite. What they told me that people are saying about you is something that could torment you. You and your friend as well,” said the young man, looking at the crane.

The old man and the crane were again still for a moment. Then the teacher said:

“I have one last question for you. Is it necessary for me to know what people are saying about me and my friend crane?”

“No, not really,” said the young man, thinking hard.

“Then go,” said the old man. If you aren’t sure about something, you aren’t’ doing any good by telling it and there is no need to say it. It isn’t worth talking about.

The Fable of the Black Sheep and the Value of Honesty
Many of us have heard of the term the "black sheep", but do we really know where it comes from? Here is the real story, and what it has to say about honesty. Read more »
Link copied!
Interesting Articles
Culture
The Flynn Effect or Why We're Getting Smarter

Wellness
7 Zen Commandments That Will Change Your Life

A stroke is a type of cerebrovascular pathology. Strokes represent up to 50% of all neurological diseases. In addition, strokes are the third cause of death in the world after…

Philosophy and Psychology
Absurdism According to Albert Camus

It's commonly believed that philosophy is devoted to answering questions such as "What's life?", "What's the meaning of life?", "Why…