The Tibetan Monks Who Surprised Scientists

Tibetan monks are a recurring theme in fiction films. Popular belief sometimes attributes supernatural virtues to them. What's puzzling is that some scientific studies found abilities in them that go beyond the normal parameters. 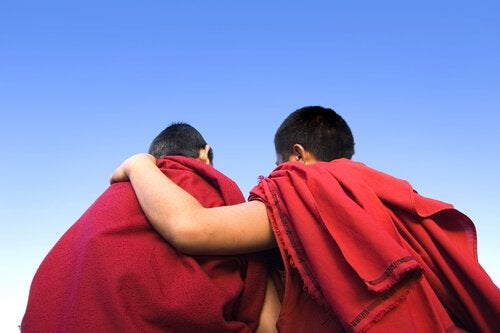 Herbert Benson was a cardiologist and a celebrated professor of medicine at Harvard University. He spent a lot of time studying Eastern cultures during the 60s. It was right when the subject was a source of apprehension to some people. This is why he waited until after midnight to infiltrate 36 Tibetan monks into his lab.

Benson wanted to see for himself how much myth and reality there was in the stories people told about Tibetan monks. Bruce Lee was all the rage on TV in those days but, beyond that, transcendental meditators were thought of as people with superhuman characteristics. After all, Benson was a scientist and he didn’t believe anything that science couldn’t prove.

What he discovered that night changed his life forever. In fact, three years later, he wrote a book that later became a bestseller: The Relaxation Response. Not only that but it created an alternative type of medicine. One that states that faith can heal as the placebo effect has high therapeutic power.

What Herbert Benson and his team found was that, indeed, Tibetan monks had abilities that contradicted scientific claims.

For example, a group of those monks who practiced yoga using the Tummo technique could reduce the temperature of their hands and feet by up to 17 degrees. So far, there’s no scientific explanation for this phenomenon but the Harvard Gazette reviewed that experiment and subsequent ones.

Supposedly, Tibetan monks can raise their body temperature to the point of drying wet sheets with their bodies. This wasn’t the only thing. Benson also found that advanced meditators who used the Sikkim technique could also slow down their metabolism by up to 64%.

In the article “Ciencia y Meditación” (In English: “Science and Meditation”), written by professor Ana María Krohn from Antonio Nariño University states that there are about 500 studies on the physiological, psychological, and sociological effects of transcendental meditation inspired by the traditions of the Tibetan monks so far.

Also, she mentions that the first study on it was published by the magazine Science in the 70s. In it, the author indicates they found a different state of consciousness in monks.

Science talks about dreaming, deep-dream, and waking consciousness. Apparently, there was a fourth state that combines rest and alert simultaneously in the monks.

In 1971, Daniel Goleman, the creator of the concept of multiple intelligences, wrote an article called “Unstressing”. In it, he postulates the existence of a fifth type of state of consciousness. One in which there’s not only simultaneous rest and alertness but also action.

The matter of the superior capacities of Tibetan monks and other transcendent meditators is one of the things that always borders the line that separates fact from fiction. Therefore, it isn’t uncommon to find verified information, along with myths and legends. It isn’t always easy to distinguish one from the other, though.

An example of this is the case of Swami Rama. He’s the author of Living with the Himalayan Masters: Spiritual Experiences of Swami Rama. This study claims that Tibetan yogis and monks can stay still for several hours and levitate.

However, there’s no evidence that this is true. But there are some studies that the Menninger Foundation conducted on him.

Doctors Elmer and Alyce Green studied his “powers”. Their results indicated that Rama could produce the same brain waves from sleep in his waking moments. Also, that he had voluntarily stopped the pumping of his heart for 17 seconds without it ceasing to beat.

Although the media published this phenomenon at the time, they didn’t follow up on it. In any case, the results of the studies were published in Beyond Biofeedback by Elmer and Alyce Green.

Perhaps it’s nothing more than a scam, a rather sophisticated and ingenious one. Or, perhaps, the mind is absolutely wonderful and humans are just beginning to discover it.

31 Tips from Tibetan Wisdom
What do we seek in the world? Health, peace, money, love? The wisdom of Tibetan monks gives us the answer we seek satisfaction with ourselves to achieve Read more »