The Theory of Yin and Yang: the Duality of Balance 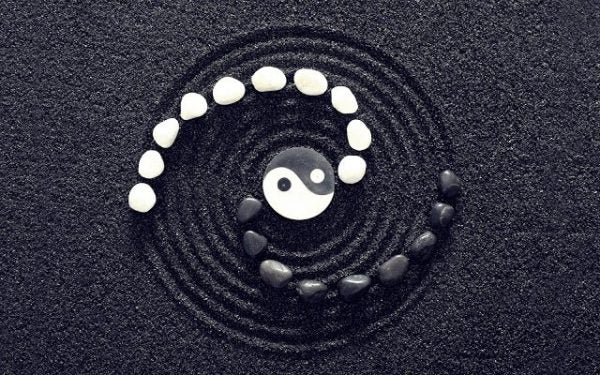 The theory of Yin and Yang tells us that everything that surrounds us is made up of two opposite forces that harmoniously unify to favor movement and, in turn, change. So, while Yin symbolizes darkness, water, intuition, and the ability to nurture life, Yang constitutes momentum, luminosity, expansion, and fire.

This concept ingrained in Taoism constitutes in itself a framework of undeniable reflection and, at the same time, wonder. Now, in the midst of such a suggestive game that is both dialectal and conceptual, in which everything seems to have its opposite and in turn its other complementary part, there is an obvious fact. It’s the nuance that characterizes all of us, this modern, advanced, bright, and, of course, globalized society.

Right now, our personal vision is limited to seeing everything that surrounds us in absolute and dichotomous terms. People are good or bad. You’re rational or emotional. You’re with me or against me. If you’re not intelligent, you’re ignorant. Happiness is the opposite of sadness. If you don’t agree with my truth, you’re defending the lie. In turn, and not any less important, we’ve fabricated a society in which we emphasize Yang in almost every scenario.

We value the rational over the emotional, we emphasize strength, the dynamism and the sense of domination that often frames patriarchal societies. We’ve forgotten to nourish or take care of the more holistic view, the perception capable of seeing the reality as a continuum, rather than a game of forces in which one must always prevail over the other.

Let’s reflect on that.

The Theory of Yin and Yang: what we have chosen to hide

We all recognize the symbol of Yin and Yang. And although this diagram has its most remote origin in Chinese philosophy, it can also be said that this idea, this concept, has its testimony in multiple cultures. It’s also seen in Hindu, Egyptian, and Hebrew traditions. This display of duality, the corollary where day and night, masculine and feminine, and the earth and sky form this sense of harmony where the opposite is complimented and flows to give dynamism and sense to life.

On the other hand, Yin and Yang suggests that each and every one of us has already arrived “complete” in this world. We have capabilities, qualities, and characteristics that make up a varied, immensely rich, and sometimes contradictory entirety. However, we see ourselves as a series of concrete, definite, and absolute traits. For example, we can see ourselves as noble, just, and kind beings. However, we forget that violence may also arise in the least expected moments.

We can conceive ourselves as very active people, but sometimes laziness also embraces us. We can feel happy and then feel hopeless on the same day. We’re capable of loving and hating at the same time. A person can also spend their life governed by logic and the most objective reasoning and change at any given moment. They can realize that this isn’t the way and focus their energy on their more intuitive and emotional side.

Carl Gustav Jung dedicated a good part of his life to this idea. According to the Swiss psychologist, human beings live in a continuous contradiction. Although we all arrive complete in this world, in our education, in context, or even in ourselves, we can choose which parts to hide, which to deny, and which to reject.

Men, for example, will opt to hide their Yin, the feminine part, the more emotional, sensible, and intuitive side so that Yang can shine. Yang is that more dynamic, conquering, strong, and energetic part. Jung explained that we hide the things we don’t accept or avoid exploring. And this act of hiding those things we don’t accept generates suffering and contradiction.

Yin and Yang: the symbol of transformation

Interesting and subtle nuances make up the theory of Yin and Yang. Its symbol, with the central wave that divides the circle, comes to remind us that life isn’t static. It symbolizes the impulse of energy, the resurgence of change, and the ultimate need to transform ourselves in order to advance and grow.

At the same time, we can also see how in the center of each part there’s another smaller circle with the opposite color. This symbolizes the seed of the other. The theory of Yin and Yang reminds us that we can’t see each other in absolute terms. We also cannot see life from the classic point of view that everything is black and white. In being human, just like in life, everything is relative and everything can change at any given moment.

Our personal harmony begins from our own capability to maintain a balance between all of the forces that come together within us. In order to be happy, we have to know how to manage our sadness. In order to love with maturity, we also have to love both our partner’s light and dark sides. In order to contribute to our personal development as human beings, we need to find a point where the emotional and the rational synchronize, a personal space of self-knowledge, acceptance, and expansion.

Therefore, we have to work on these opposing energies that still inhabit us in order to create a more harmonious, meaningful, and above all, satisfactory, self.

9 Buddhist Sayings to Reach Internal Peace
There's something about Buddhist sayings that goes beyond the religion. They've become accepted in parts of modern psychology, and can help you live a happier life. Read more »
Link copied!
Interesting Articles
Sayings
The Famous Sayings of Herbert Marcuse

Many of the quotes written by Antonio Gramsci have a rather particular charm. Almost all of them represent the perfect…

Tirso de Molina was Gabriel Téllez's pseudonym; he's one of the most representative scriptwriters of baroque theater. A friar, he…