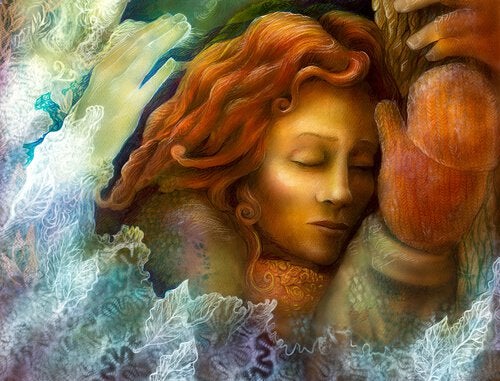 Strong souls come from suffering. Souls that, despite difficulties and problems, have decided to not give up. Resistant, resilient souls.

Souls that have been through the valley of difficulties and complications. But, they have crossed it in such a way that they’ve emerged with new lessons learned.

Souls that have sailed through the depths of idleness and suffering, through an ocean of fears. But they’ve also encountered overcoming and bravery. Strong, docile souls.

Souls that have found themselves lost in a labyrinth of challenges. They’ve been trapped in the cobwebs and chained up in a prison of their own fears. But they were able to find their way back. Brave souls.

Souls that can at times be sensitive, delicate and inspiring. Because part of their strength lies within the sensibility of their gaze, the delicacy of their acts and the inspiration of their inner self.

Souls that have turned their open wounds into scars. These are a mark of everything they have lived through and survived. They’re proof of their battles. These scars remind them that they’ve grown and moved forward. Remind them that with strength and will, everything is possible. Because the art of living doesn’t consist of eliminating your problems, but rather in growing with them.

And those wounds today are scars. And they shine as witnesses of the ability those souls used to transform difficult situations into success and accomplishment.

That’s why, there’s no scar that doesn’t hold beauty in it. Within them you can find personal stories, pain, fears, or maybe letdowns that have in some way come to an end.

Although, as the writer and singer Marwan said, “Scars are the stiches of memory. An imperfect closing that heals as it harms us. They’re the way time has found to never let us forget our wounds.”

That’s why they usually cover strong souls, as do bravery and resilience, like shields. And love and kindness work as an antidote to heal our wounds.

The strongest souls come from suffering. Patient, persistent souls that seek the smile in each tear. The alternative to each problem and opportunity in each crisis.

Gigantic souls, though they can barely be seen. Because their greatness resides within their ability to recover. And that is truly so great, so grand and so immeasurable. But at the same time, it’s so invisible.

Heroic souls that knew how to see the light through the darkness and the rainbow through the storm.

And when these souls realized they couldn’t change the people, circumstances or things, they decided to change their attitude towards their suffering. Insightful souls.

Souls that on their journey found themselves face to face with the deepest part of themselves. So they decided to get to know it. And to become their own best company. Deep souls.

Teacher souls from which you can learn great lessons about the abyss of difficulties. But they’ll also plant within you the desire to overcome them yourself and continue on. Because they’ve transformed the painful memories into the gift of helping others.

Learner souls. Everything that’s bad serves them as a way of growing and advancing, to evolve despite the storms. Because they’ve discovered the ability to reinterpret and perceive all of the different perspectives.

Souls full of beauty. Souls willing to help you when you need it. Because nobody knows better how intense a feeling can become. Intelligent souls.

The strongest souls come from suffering. And because of this, I want to thank them for their ability to recover despite the winter. They’re our greatest example of survival.

Personal Development
Learning to Set Boundaries: Why Is it So Important?

Learning to set boundaries doesn't mean defending your opinions and beliefs at all costs. Nor does it mean being sincere…

Wellness
I Love You, Even When You Don't Deserve It

I love you, even when you don’t deserve it, even if this seems incredible to you, and maybe even unfair…