Self-deception and alcoholism work together to keep an addiction going. This is a form of long-term self-medication that can turn into psychological torture for those who suffer from it. 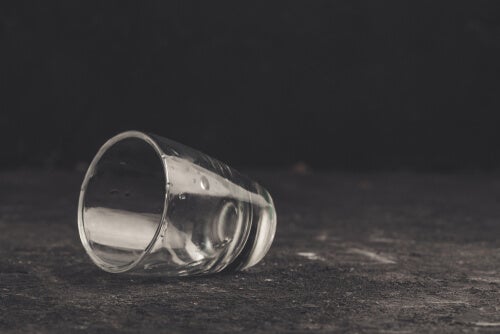 A few years ago, a fellow psychologist said she was unable to understand alcoholics. She didn’t understand that self-deception and alcoholism go hand in hand and wondered why people had such contempt for life and hurt themselves with toxic substances. Unfortunately, these kinds of “professionals” abound. They have a biased and moralistic perspective that’s incapable of giving attractive and dynamic alternatives. One that only deepens the feeling of incapacity and perpetuates paralyzing guilt.

You must understand that self-deception is one of the factors that intervene in the continuity of alcoholism and the manifestation of relapses. However, self-deception isn’t what causes addiction. In fact, it’s the decisive factor that maintains it in many cases. By understanding this, you’ll be able to unravel the connection between self-deception and alcoholism to have a more rehabilitative perspective of addiction.

According to experts, alcoholism is a biopsychosocial disorder. Also, it’s impossible to ignore environmental factors given its etiology and evolution. As we mentioned above, it’s crucial to understand self-deception and the perpetuation of the problem (Zucker and Williams, 1994).

Alcoholism as a way to avoid an aversive reality

Addicts may seem completely irrational and incomprehensible to others. With grief tinged with exasperation, non-addicts wonder how a person can be so wrong and not see the pain they’re causing themselves and others. How can self-deception in alcoholism be so destructive?

Gregory Bateson was the first to try to understand alcoholism through a complex epistemology. His essay “The Cybernetics of “Self:” A Theory of Alcoholism” considers alcoholic behavior a corrective experience.

If the alcoholic’s sober life pushes them to drink in some way, they shouldn’t expect sobriety procedures to reduce or “control” their alcoholism.

Realities, discussions, and memories that only ask to be anesthetized push people to drink. There are errors in normalcy, it may even be a pathology for many people who are too sensitive and ends up addicted. They don’t find that high in their own lives, in their work or family life.

Intoxication only brings a (subjective) correction of this existential paradigm. In other words, for these people, the poisoning is “good” when compared to their sobriety.

For Luigi Cancrini (1993), alcoholism, like drug addiction, can be considered a self-therapeutic attempt to face the relational and family dynamics that are sources of suffering.

How does self-deception make you keep drinking once the alcohol begins to affect you?

The most contemporary treatments of self-deception have legitimately focused on Butler’s requirement of intent. When you’re motivated to believe something, you tend to operate with a certain confirmation bias. You seek evidence to support your beliefs and tend not to give as much thought to what challenges them.

People more readily accept what’s before their eyes as evidence, especially when it supports their beliefs. Therefore, self-deception in alcoholics implies a motivating belief, even if it’s false.

Many addicts don’t believe they have a problem. They only enter an intervention when pushed by their environment. In this case, people seek therapy incited by others and not for themselves. It may be because they aren’t in pain, because they don’t want to see them suffer, and because they can’t endure the pressure they’re subjected to every day. In these cases, the person is likely to follow such interventions just for show.

Furthermore, they can base their idea that there isn’t a problem by pointing out others in their circle of acquaintances who consume more than they do and haven’t yet experienced harm. It may also be an excuse to point out the fact that, in the past. they quit cold turkey.

As long as a person’s motivation remains dormant, it’ll be very difficult to convince them of the falsity of a belief. Similarly, if a person can begin to understand what motivates them to maintain certain beliefs and points of view, they’ll acquire some crucial knowledge.

Thus, addiction is a habit, one people do automatically without conscious intention. When you slow down the usual actions by asking why you’re doing something, you’ll be able to get out of autopilot mode.

In conclusion, being aware of self-deception will provide common ground for people who care to understand how others may fall prey to their own addictions. Within these people, you must place psychology professionals at the forefront.

The Thin Line Between Alcoholism and a Habit
One of your friends has been diagnosed with alcoholism. Furthermore, this habit of meeting up every Friday for drinks is part of the problem. Read more »
Link copied!
Interesting Articles
Clinical Psychology
Are You Having a Panic Attack or an Anxiety Attack?