The Smartphone Zombie: Staring at Your Phone While You Walk

A smartphone zombie is a person who stares at their phone while they're walking down the street. 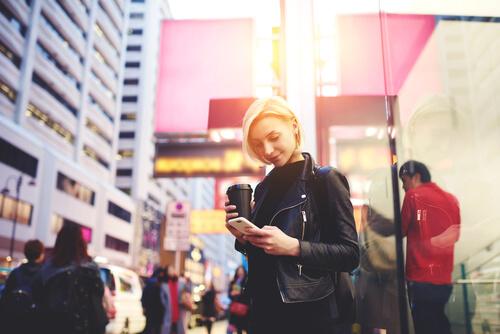 A smartphone zombie is someone who stares at their phone while they’re walking down a street. Focusing entirely on your phone while you’re walking is risky. For example, you could get hit by a car if you don’t pay enough attention at a stoplight or you could run into other people.

Apps such as Facebook, WhatsApp, Twitter, and Instagram capture people’s attention as they walk. On top of the risk associated with doing so, staring at your phone while you walk keeps you from noticing your surroundings or anything that’s going on around you.

The dangers of being a smartphone zombie

You have to pay attention as a pedestrian, no matter how well you know your city. Although the things that are going on around you aren’t happening at lightning speed, you still have to be looking up to notice them. This is what makes becoming a smartphone zombie so potentially dangerous.

When cars started to become popular at the beginning of the 20th century, there was a major awareness campaign of all the dangers of being an unfocused pedestrian. This was when the word “jaywalker” first appeared. It referred to rural people who would stand in awe of big buildings, monuments, crowds of people, etc.

That lack of attention, combined with their lack of knowledge of how to act in these spaces and how much a car could hurt them, shot accident rates way up. But back in the present, there’s a new distraction for people who are walking down a street: their phones are turning them into smartphone zombies.

Attempts to prevent people from turning into smartphone zombies

In Spain, for example, there have been multiple campaigns about the dangers of being a smartphone zombie. In the summer of 2013, the small town of San Javier put up a very interesting traffic sign for pedestrians.

It said: “Look up, pedestrian. Pay attention while you’re walking. Your WhatsApp message can wait.” Similar traffic signs have popped up in downtown London, along with some other tools to keep distracted pedestrians safe.  Unbelievable as it might sound, looking at your phone while you’re walking can lead to an accident because it reduces your peripheral vision.

Technological measures to keep people from turning into smartphone zombies

There are some apps you can download to help keep you from turning into one of these zombies. Transparent Screen is one of the more interesting ones. It uses your phone camera to allow you to see the street through your phone.

In fact, some phone manufacturers are even starting to include these kinds of applications as built-in features. However, as clever and effective as these kinds of solutions may seem, they could also worsen the problem. By making it safer to be a smartphone zombie, they might encourage people to become one.

At the end of the day, people should just make a conscious effort not to use their phones while they’re walking. If you really do have to look at your phone while you’re walking, stop for a few seconds to do so. It’ll keep you safer and you won’t be bothering anyone in the process.

Disconnecting Yourself from the World
Disconnecting yourself is one of the keys to happiness. Life demands too much from us. This is why we need to escape every once in a while to recover. Read more »
Link copied!
Interesting Articles
Cinema, Television, and Psychology
The Joker, the Perfect Villain

Many people say that narcolepsy is more a curse than a disease. It's a chronic sleep and neurological disorder where,…