The Sad Elephants: A True Story

The protagonists in the story of the sad elephants are Lawrence Anthony, an African conservationist, and a group of rebellious elephants with whom he lived and spoke to as if they were humans. 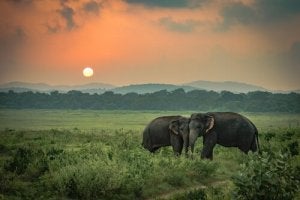 The story of the sad elephants is one of those true stories that defy fiction. In fact, there are some aspects of what happened that still have no explanation. They just happened and we still have no idea why.

It all starts with a man named Lawrence Anthony, who was born in South  Africa in 1950. He was the son of a prosperous Scottish miner who left his native country after falling in love with Africa. Lawrence inherited both the mining business and the love of nature that was a great characteristic of his father.

Lawrence Anthony became a biologist and then a conservationist. Eventually, he realized he had a special weakness for elephants, one of the most endangered species in the world. Therefore, he dedicated his work to carry out all kinds of actions to protect them. Thus begins the story of the sad elephants.

“Our perfect companions never have fewer than four feet.”

Before continuing with the story of Lawerence Anthony, let’s talk a little about elephants. Of course, this species is more famous for circus shows than for the extraordinary abilities it has. In reality, their evolutionary intelligence is only comparable to that of chimpanzees and dolphins.

Elephants have big brains. In fact, no other land animal possesses a brain of that size.  Consequently, they’re very intelligent animals. And, their level of intelligence isn’t only about their impressive memory. In addition, they also have very advanced social behaviors.

One of the most striking aspects of elephants is that they’re one of the few species that mourn their dead. Mourning elephants express their grief through small funerary rituals when one of their kind dies. However, the elephant doesn’t have to come from their pack. When they find a corpse or bones of other elephants, they always stay there for a while. Whatsmore, they surround it, in a kind of homage.

Let’s go back to Lawrence Anthony now. His name started to become famous for something that happened in 1999. In a small village, called Zuzulanda, the government offered an unusual proposal. They would give a herd of elephants to anybody that wanted it.

However, there was a problem. The group of elephants was very troublesome to the point that the government considered them wild animals. They broke things, didn’t obey anyone and ran away whenever they could.

Lawrence Anthony decided to take on this challenge. So, he adopted the herd of elephants and departed with them to the elephant reserve he had built himself. The name of the reserve is Thula Thula, which means ‘peace and tranquility.’

One day, he noticed that Nana, the matriarch of the pack was one of the most rebellious of the pack. She had scars of being abused and ran away whenever she could. So, Lawrence decided to sleep every night with the pack, his assistant David and his dog. A fence surrounded the land.

Every morning, Nana would line up with the other elephants. Her intention was to tear down the fence. However, according to the story of the sad elephants, Lawerence would talk to them about the dangers they would face if the left the reserve.

First, Nana became curious about this man. Later, that curiosity would give way to love. Thus, they stopped being a herd of rebellious elephants and became great friends with their caretaker.

Lawrence managed to tame these supposedly wild elephants. Later, he carried out other feats. For example, he rescued more elephants from the Baghdad zoo during the Iraq war. Likewise, he rescued other elephants during the Congo war. Later he wrote several books about his experiences. He was especially interested in the way elephants communicate.

On March 2, 2012, Lawrence Anthony died from a heart attack. Thus began the most amazing event in the story of the sad elephants. As it turns out, two days after his death, the wild elephants he had rescued began to arrive at his home. All of them were at his house within a day. The matriarch guided both herds. A total of 31 elephants walked more than 20 kilometers there.

They all walked in single file, surrounded the house, and stayed there for two days, without eating or drinking during that time. Maybe this was their way to express their sadness, their way of saying goodbye to their great friend. On the third day, they left with the same solemnity with which they had arrived.

Nobody can explain how they found out about Lawrence Anthony’s death.

The Beautiful Story of the Elephant That Lost its Wedding Ring
This is an old, beautiful story that people have narrated from generation to generation. Discover the story in this article! Read more »
Link copied!
Interesting Articles
Stories and Reflections
Is Brainwashing Real or Just a Myth?