The Rule of the Three "eses": Surrender, Smile, Savor 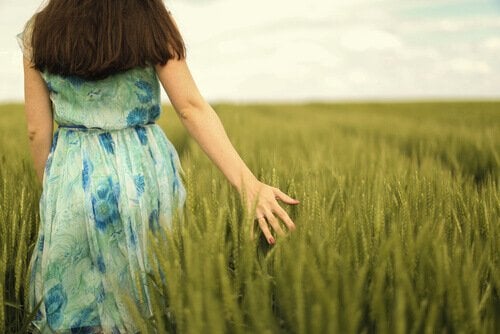 The rule of the three “eses” offers us a simple but valuable lesson. According to this idea, in life you have to learn to surrender because when you let go, you make way for your own potential. Then you have to smile, allowing you to connect with your inner self to generate optimism and confidence. Then you must savor the moment and open yourself up to everything yet to come.

Jose Luis Sampedro said that we all have a duty to seek freedom. However, as you well know, sometimes freedom demands a certain amount of courage and for that, we are not always prepared. As children they teach us to cross the street when the light is green, to find the least common multiple of two or other common numbers, to tell the difference between eukaryotic cells and prokaryotes and thousands of other pieces of information that in the long run, do not amount to much when it comes to happiness and personal growth.

According to psychologist James O. Prochaska, known mainly for stating what is known as Prochaska’s and Diclement’s model of change, from very early on mentors should introduce us to two important concepts. These concepts are in reality two vital pillars for understanding: we are talking about perseverance and the healthy process of change.

Perseverance is, on the one hand, the ability to commit ourselves to a goal. It is the combination of resources and motivation. It includes time and energy put towards that goal or dream for that person. Sometimes, that commitment no longer makes sense when there is no benefit to receive from it. That is to say, you are feeding yourself more false illusions than reality. This is when you need to apply the well-know rule of the three “eses”. Let’s see what that entails.

The rule of the three “eses” for personal growth

As stated earlier, in our education or in our upbringing at home, no one prepares us for change. No one taught us what to do when anger, disappointment or frustration falls upon us. That messy and impossible to solve emotional puzzle was force fed to us and left there as if nothing happened.

This common phenomenon did not occur in a 19th century Hawaiian town. They understood that the mind, body and soul were related in an integral way. They saw that whoever had built up negative emotions and fought internal battles alone, ended up getting sick. Therefore, to avoid the stress that led to physical and psychological ailments, the Hawaiians created an evocative and wonderful practice. David Kaonohiokala Bray, the priest shared a large part of this native culture to the world, described this practice.

It deals with the black bag and the rule of the three “eses” that we will discuss shortly.

The black bags and the need to let go

When a member of the community was going through a bad time, the group met and performed the ceremony of the black bag. That person simply stated aloud everything that bothered or worried them. Each thought was symbolized by a stone that was placed in the bag.

After the ceremony, someone buried the bag in a secret spot. Only after troubled community member carried out the rule of the three “eses”, the bag would be destroyed, symbolizing his liberation. And for them, the first step was to learn to let go.

This practice, a key to our personal growth, generates an emotional cleansing. As the Hawaiian community explained, just as you clean your clothes, home or dishes, you also must cleanse yourself of the emotions that imprison you.  They makes you “dirty” on the inside.

The next step of the rule of the three “eses” is to smile. Although the act of smiling is not an easy task when we failed to let go of certain things, it is necessary to try it. The reason is clear: when you dare to liberate yourself from negative emotions and break the ties to things that are no longer useful to you, what you often experience is emptiness.

It’s like being suspended in the air. We are aware that behind us there has been a lot of baggage and stones left on the road. Now, what we have before us is a blank canvas. So that this blank canvas or emptiness doesn’t scare you, you have to dare to smile. You must embrace what is to come with optimism.

Feel the pleasure of freedom

The last key of the rule of the three “eses” is the most hopeful and the most powerful: to feel the freedom. Let’s think about it. When was the last time you truly felt free? This overwhelming feeling arises when there is no more emotional weight inside to hold you down. There are no more black bags that poison our thoughts and grip our bodies. You are restored to health. Savor it.

To feel is to embrace the present. It is to trust and listen to yourself and be in tune with your surroundings. To feel is to live without fear. That is something we should should practice in our everyday lives as the ancient communities of Hawaii did. Because only when the troubled person reached the last step of feeling free emotionally, the group came together again to destroy the black bag. This act symbolically destroyed the sorrows, fears, anger and emotional blockages of that person.

Reflect on this. Apply the rule of the three “eses” daily.

Being Mentally Overweight: our Thoughts and their Consequences
If you feel that your body is constantly tired, stiff or sore you may be suffering from being overweight. But here we're not speaking about physical volume, rather being mentally overweight. Having too many negative, inert and unproductive thoughts. Read more »
Link copied!
Interesting Articles
Wellness
To Live is to Untie Knots, to Sew Dreams, to Weave Stories

To live you must sew dreams and untie knots of the past and present, and also move forward with greater…

Wellness
8 Keys to Better Living, According to Zen Coaching

Zen coaching combines two focuses. On one hand, the discipline of "coaching" is orientated towards making connections, instructing, and training…

Sleep is a fundamental part of your physical and emotional health. Although it seems like getting a good night's sleep…